I would help also. At the moment I am not working so I have a bit of time

Awesome, awesome, awesome post JoJo!!
Thank you for all that great info in one spot! Might I suggest making that a sticky somewhere? (I bookmarked it, but I think it’s definitely something that would be greatly beneficial for new folks to see and know, as well as a wonderful reminder to others to be able to revisit once in awhile!)

Side note: not calling you out by any means, and it could have been an error in procedure on my part (probably my part, being new) , but I know I lost notes 6 or 8 months ago when there was a merge. It’s foggy, but I remember being confused on seeing two, and didn’t know which was my original, and which was the new one, and chaos ensued. Bottom line, I remember deleting one, then doing a browser refresh, and they were both gone (I figured it was a glitch due to being named the same). I’ve slept since then, so I can’t be much more specific unfortunately. =/

Regardless, I can (and do) fully appreciate all that managing this behemoth that is ELR encompasses. And I love you guys for all your hard work! Managing sites and databases is a huge and often thankless job.

Dang it @CallMeTut, don’t give any big ideas, I’m hoping to make recipes from each and every flavor man…Come on…

I’ll have to go back and add some dupes to my stash and merge them and see what happens. I was pretty sure everything merged well, but I’ll look into it. May have been a glitch or it may be that notes do disappear.

I’ve sent over some suggestions using dupe checker. When you have chance, please will you let me know if I’m doing it right (I’ll hold fire doing anymore until then in case I’m making the task worse!)

@JoJo Is Nicotine considered a flavor? If not, could I join the hundred or so of them together?

Uh…I didn’t even think to look for Nicotine being a flavor. Go ahead.

Hey JoJo, take a look at my stash when you get time. Nicotine is one of the primary things I was hoping to keep “distinguished” (separated) from the rest, as mentioned above.

If you do decide that it’s more important to merge things, I’ll understand, but would definitely appreciate a heads up first, so I can save those notes into my personal files first!

Also, the reason for the preceding dash and space ("- Nicotine") format, is to keep those items at the very top of the flavor list, since pg/vg/nic are relevant to ALL mixes (for the majority) of users. There is a method to my madness!

Like flavors, as we all know, Nicotine is not created equal! lol

Is there a reason why you have them as a flavor and don’t use the calculators PG/VG/Nic?

(I created them both to remind myself of what was good or bad about a vendor’s nic etc, as well as provide the info IN THE DATABASE in the hopes that it would save the question being asked in the forums (even one less time).

Primarily the notes. There’s a ton of folks that I’ve never seen in the forums who use the recipe side… So I feel notes there are just as valid/valuable as the great information in threads here. JMHO and YMMV!

Ah okay. I won’t merge any that are branded, just the ones that are generic into one generic one. That sound like a decent compromise? 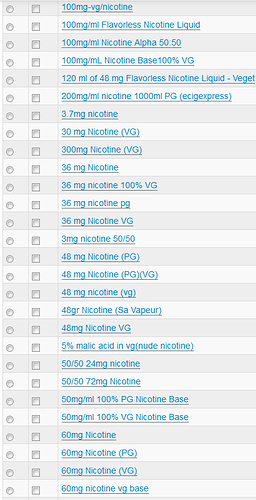 Just to understand correctly notes are not being moved over correctly…?
Any idea if the “recipe use in” is being transferred? I looked at a number of “strange things” like “#1 Flavor” and in the information of it, in the recipes used with, would be “#3 Flavor” neither of which would have notes as to what these things actually were.

@JoJo that sounds great! Thank you!

@CallMeTut I definitely agree that the majority could be merged! And I’m not trying to play Devil’s advocate, nor go against you bud. I just want to make sure that the baby doesn’t get thrown out with the bathwater!

One thing I would suggest about “sweeteners” (as a category) though is to make sure and keep groupings in mind. Some are 20% (like Cap super sweet), some are 10%, some are 5%, some are Stevia, etc. Each is wholly different, and deserves it’s place IMO.

Anything that isn’t distinguished in any way should be “lumped together”. Again, JMHO.

I realize, that due to affiliate links being the way they are (functionality wise) that’s why they have remained separate this far. But I can’t think of any other way to cut down all the branding (as clearly shown I in the pic that Tut so kindly took the time to share) without violating the link process. The majority of those “sub-brands” (ie: OOO, TFA, NN, etc) are probably going to fall squarely into the 10% sucralose category.

Not seeing ya playing devil’s advocate at all! When I’ve been requesting merges I’ve been trying not to add anything that said “base”, “diy”, or adding known abbreviations for companies into a “generic” flavor. For the most part, I until I looked at sweeteners or thought about nic/pg/vg, I was just adding together things like all the same named ingredients (like there are about 70 some Apricots) and merging the tpa, TPA, and tfa into the TPA, Capella into CAP, and anything that wasn’t in a real catagory into a generic “Apricot” mostly if they had a “0” in the area of recipes used in…: 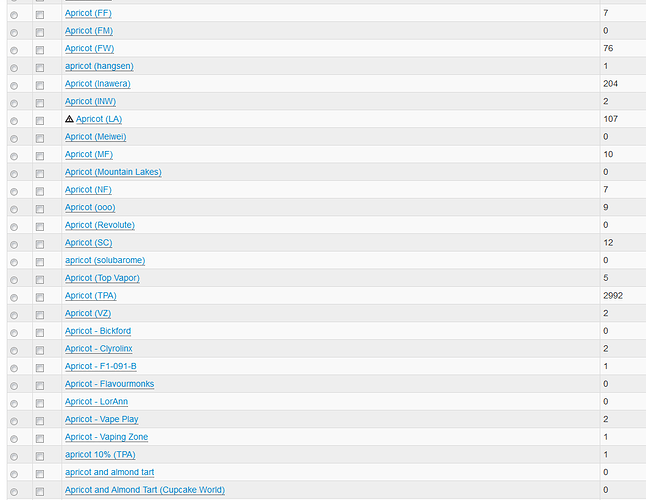 In that picture above LorAnn Apricot had a “0” in the recipes used in, but since it was a known vendor I wouldn’t have asked for it to be merged, I was just looking at getting some of the other things cleaned up a bit if possible.

That lorann apricot with 0 is a dupe and could be merged to the one that is LA. Guess I should add that to this list.

I’m looking into the notes thing. I thought they stuck, but I’m gonna make sure.

I was thinking any user input data stayed even if the flavor was merged.

If you need a guinea pig for this, I volunteer. I made corresponding notes for Cappuccino FA and Italian Relax because they’re the same flavor but Bull City sells it as Cappuccino, only using Italian in the description. They do the same with Red Touch strawberry but I don’t have any notes for that.

I absolutely agree with you, and I’m glad you brought it up! As in the process, I’ve learned what works best to help solve what we see to JoJo!

I just wanted to make sure that you (and those reading) know that I’m not trying to throw things sideways (for anyone) , just trying to offer my thoughts and suggestions, like you and the others, in the hopes of helping to refine things, so that data is maximized, while the ‘noise’ is squelched.