We had a couple 2-bays chargers years ago. Bought a 4-bay as primary and shuttled the 2-bays to work and home office. Bought another 4-bay for the home office and the 2-bay went into the car. Bought another 4-bay for flashlight batteries. All the 4-bays where the Nitecores, the i4 and similar. Started running dual-18650 mods, and bought a 6-bay, the eFest Blu which can be controlled/displayed via smartphone app. I think we have 18 or 20 slots at home now…

Similarly, we’re now running two 7-port USB chargers and a 10-port for the phones, tablets, and the numerous mods with built-in batteries.

More than anything you dont want a charger that trickle charges your batteries if you leave them on there after they are done charging. Also its nice to be able to charge other chemistry / size cells, like Nicad.

You would be safe with a Nitecore i2 , i4 , D2 , or D4 and I would not suggest anything LESS than these.
They are inexpensive on Amazon [if you shop them]

Never have I had the batteries or the chargers even get warm.

I don’t have a device that requires more than 3 batteries to run it, and I always marry batteries, so I don’t need to have a charger with more than 3 bays, so the 4 bay is fine. I also have enough spare batteries that are waiting in the wings to use. If I need to charge any others during the several hours it takes to charge what is charging, I have an additional charger to begin on them.

Of course there are more sophisticated chargers, for more $$$, but personally I don’t see the need for 18650’s and similar. The couple of chargers that are top of the line really are no safer, some may charge a bit faster, but sometimes faster also means more heat.
I think a Nitecore D2 or D4 is safely efficient for what our use is, and my recommendation.

I have the Blu6 and like it a lot. Be aware that the maximum it can charge is 4 amps. so if you have 6 batteries thats two at 1 amp and 4 at .5 amp. The app for iPhone is horrible not worth including as a consideration. I’ve been happy with the purchase, but if I were doing it again, I’d probably buy either 2 of the XTAR VC4s or 2 of the LUC4 chargers. Both I believe can charge all batteries at full 1 amp current.

Thank you for this reminder!!

That’s one of the other MAJOR reasons that I wanted the BT-3400 for…all 4 slots will do a 1a charge (If needed/wanted).

Unfortunately, this is not the case for the VC4…

Intelligently identify a battery’s input power and automatically adjust suitable charging method and charging current from 0.1A to 1.0A and up to 0.5A4 / 1.0A2 max.

Wish it did though!

You would be safe with a Nitecore i2 , i4 , D2 , or D4 and I would not suggest anything LESS than these.

I have a Nitecore i4 and I sometimes wish I had a nifty digital display or battery conditioning features, but I can definitely live without them.

I think I want a 12-bay charger

LOL…I imagine that would mount nicely in the glovebox!! -now, you only have to contend with being able to see as that vaping family van rolls on down the road!
(this assumes of course that the kids are grown and in college…)

I think a Nitecore D2 or D4 is safely efficient for what our use is, and my recommendation.

My wife and I use the Efest LUC V4 Battery Charger with Included Car Charge Cable.
It shows the current level of each battery, charges at 0.5A, 1.0A or 2.0A. I leave it on the 0.5A slow charge. The 4 bay charger works great for us and we both use dual battery mods. We simply take the batteries out of our mod and put them in the charger and by the time our next set of batteries need a charge the other ones are done and ready to go. This charger also comes with a car adapter so you can charge in the car while on road trips. 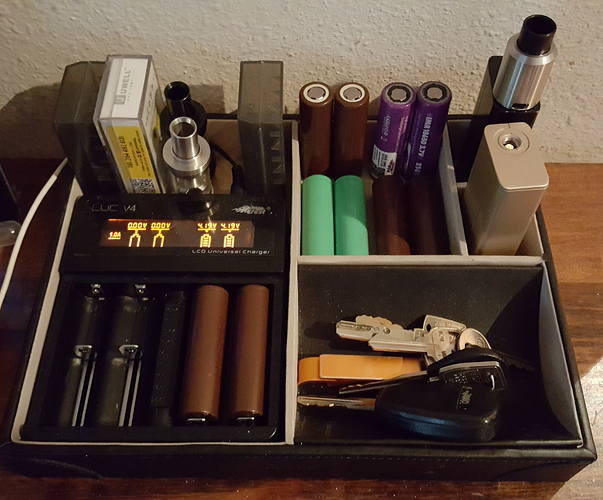 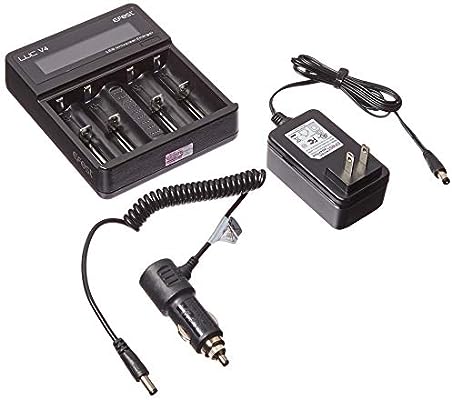 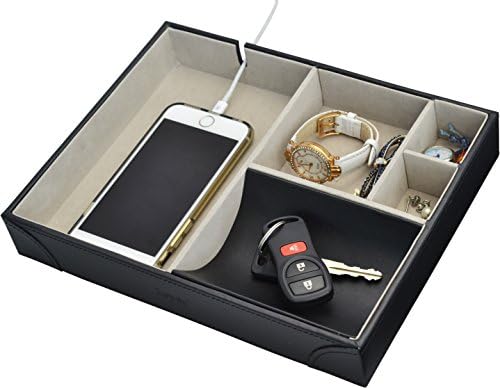 I also picked up a valet tray

The wife prefers it to be tidy looking if it is going to be out in the open and this fit the bill perfectly.

The wife prefers it to be tidy looking

[True Story]
I always picture a Caveman coming back to the cave after a long week of hunting…
Caveman: "Uh, Honey? Where’s my pile of bones? I left em right here under those Sabertooth hides?"
Cavewoman: "Uh right in front of you? I sorted all the rib bones into a pile over there and all the skulls are out front to scare off the competition …and all those vertebrae were disgusting I threw all those in the fire.
Caveman: "We have fire?!"
Cavewoman: "Yeah I got a great deal on it …only two Sabertooth hides…"
Caveman: "You know that was a project I was working on…? …and I was about to figure out that whole fire thing"
Cavewoman: "Uh huuh… hey look you Neanderthal, I just boiled up the rest of your little bone project… try this"
Caveman: “…whatevs…” Slurp Grunt "hey! this is pretty good!"
Cavewoman: <rolls eyes "You didn’t even notice I picked off all my fleas and ticks"
Caveman: “Oh baby you’re the best!”

There is something seriously…what’s the word I’m looking for?..oh yeah…UNIQUE about you! You always seem to find humor with everything! Your a really cool guy @BoDarc! I mean really, who else would come up with this stuff!?! Made me laugh and I tell you, I needed a laugh right now!

What a nice thing to say… I think

Oh yes! You think right! Only meant that in the best of ways!

Wow! Yeah, battery chargers, I have a Nitecore D2 and it works great for my needs…I have had it for over a year and it is still going strong! No need to spend a ton of money when you can get a great one for a decent price!

I have a Nitecore D2

Yeah I have one of those too, but I got the XTAR VC4 because it shows MaH rating when fully charged. I was feeling paranoia about fake batteries and hoped it might give more info re: what was really going on. I should have done more research because there are some basic bad assumptions re: this charger (mine) The MaH display only shows how much the battery was charged and is not the full capacity of the battery. Also the four slots don’t all charge at max 1V. The shortcomings however did drive the price down, so it does work, not the fastest, not a true analysis of MaH total capacity (unless you fully discharge the battery first)

I guess I’m just not that techy about stuff like that…I know basic safety, but as far as MAH and stuff I don’t really know all that much. I basically have two married sets of batteries per mod and it seems that I always have one set charging so I always have something to use, however, after having two RX200’s I wish I had gotten the 4 bay instead. However I don’t really know at what volts each slot charges by so instead of a four bay charger would it be better to just have two 2 bay chargers? Would it charge faster that way?

I got something to do the same thing. It’s called a Rubbermaid 66-quart tote. It holds just about mod and battery we have in one compartment.