DNA 200 Devices Are Not Impressing Me Much

All of your cells are below 3v but not far. Leave it on recovery and you may be okay. Your battery settings are off and I think that’s why it failed.

The cell voltage is dropping. I am now at 2.5v. Something is wrong with the zip charger would be my guess.

@Whiterose0818 has a VS… maybe he’ll weigh in with his settings.

I just got back from the vape shop. They’re both toast. The initial shipment of VS’s were delayed because of a problem with the battery wiring. Go figure I guess huh? So later today both my DNA 200 devices will be mailed back home to be repaired. You can see the fuse in the Tugboat is blown. So that one will probably be an easy fix. I am just going to make my own DNA 200.

But the great thing about the Dna 200 is the actual chip has a 1 yr warranty on it. Evolv has great customer service and will take care of it for you without a doubt. Trust me I’ve had 2 devices fuse pop on me within the first 2 weeks of having them both. It was my fault tho I had preheat at 200 and punch on like 8.7 with like a ni200 .06 build. But now I have two And they work absolutely flawless imo it’s the best chip on the market. But back to the point of the shop you got it from wont replace it I’m sure the manufacturer will. I would use evolv as your last option tho if needed.

have you seen the DNA200 kits from nonameboxmods?

i am planning on building 2 DNA200’s, just not sure whether i’ll be buying kits or if i’ll be ordering all the items individually…
keep me posted in what you decide!
heres a coupla more links for ya:
http://www.ebay.com/itm/-/222008881462?ssPageName=STRK%3AMESE%3AIT

i wish i had someone with experience buying the parts needed…OR i wish i had a good solid parts list of all things needed to build one!

I have been on the lookout for some good buttons too. There are tons of electronic supply stores online. But I am not sure which buttons will work. Basically you just need a pin that fits into a hole in the case that will press the button on the board. But all the kits I am seeing actually have switches.

Sorry to hear about your Dna 200 problems , man that sucks.I originally bought my Vaporshark back in November because it was one of the few that the battery has quick connectors.I also bought two turnigy batteries from Hobby King at the same time.Even though the batteries will physically fit I am going to have to solder on a different connector before they can be used.I have since picked up my third Dna 200 so swapping batteries isn’t a priority any more.
From everything I have read about VS they will replace your mod but yeah that still sucks.
There was a guy/company on Facebook selling aluminum boxes that were machined like the Evolv reference mod and very reasonable but I haven’t been able to find them.I read about it on the Evolv forum and I will include a link.As far as builds go the forum has some pretty good information that may help.
http://evolvapor.forumchitchat.com/post/evolvs-black-reference-mod-7783521?highlight=referance+mod&trail=30
http://xevape.com/?post_type=product

I found out today the Vapor Shark battery is removable, so I was told. When I was looking at it that is what I thought as well. There are 3 connections. The positive and negative power wires I was told are bullet pins under what appears to be loosely shrunk shrink wrap. Then there is the balance plug. It is the one with 4 wires going to it. So I am betting if I were to be a bit more brave I could have just removed the battery and charged it with a real charger. I am going to ask Vapor Shark if this is an option that won’t void the warranty. Because if so I would like to keep a spare battery on hand just in case I am somewhere without a charger.

I just snapped mine apart to take a quick picture for you. 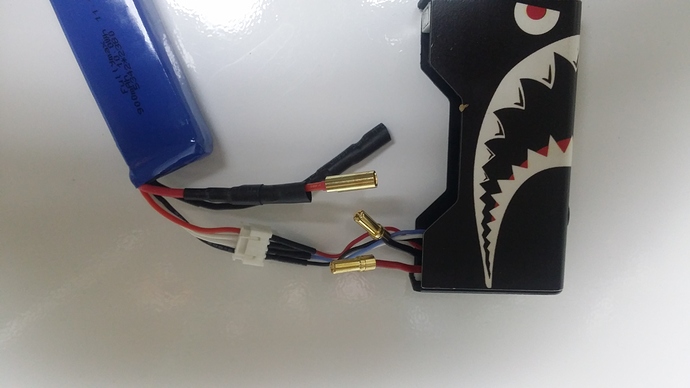 That is what i was guessing was under the shrink wrap. Same thing used on some of my RC’s. Love the decal!

I got the decal from a seller on amazon.I like it but it does make it a little slick.I picked up a silicone sleeve that I really like on eBay.I grabbed one for the wismec as well and am pleased with both.

Silicone Sleeve for VaporShark DNA 200 & DNA 250. We have sold tens of thousands of these silicone cases. We know it is red, but it has been seen as pink, hot red, orange, and at times even dark red. | eBay!

I got some good communication from Michael Crespo at Vapor Shark. He informed me the LiPo is indeed removable and chargeable outside the device with up to 2 amp balance charging. That to me is a very smart move. I am not at all upset about this little bug because of how they have handled this so far. Joe told me they were great people to deal with. So far he was right.

I’m guess that when i get ready to build my DNA 200s, the DNA 200 forum will be a solid place to get the assistance i will need…parts list, reliable sources, etc…kinda exciting!

It seems to me there is a shortage of decent buttons to use in the DNA 200’s.

did you look at the link i sent of that one companies ebay store site?

Yeah. But if I were going to build my own I think I would use a Sardine can or something crazy. Block of wood. You can mount the stuff in anything. Think outside the “Box Mod”. I found some other hardware late last night.

Another thought it there is a Swiss machine shop right next door to us. They could whip up some buttons cooler than anything the other guys are using.

yeah, i want to do something different than just a standard Hammond box myself. i saw a guys mod, an Altoid box.
but my first might just be a Hammond box to get the feel. THEN, i’ll do something cool/different.
my Queen wants to do her DNA 200 build in a little coffin…gonna HAVE to make that happen!

I think the reason my Vapor Shark stopped charging is one of the battery or USB wires probably came loose on the board. I didn’t pull it all the way out to see. But knowing now that the battery is removable without voiding the warranty I wish I had. I did pull it out far enough to see that they have those wires in there very tight. Not sure if they planned that, or if was inherent to the design and they just decided to go with it.

So what was the problem with the tugboat dna? Because today mine was working great and usual, come home watch some TV go to take a vape and nothing? Screen doesn’t come on and mod doesn’t fire? Like wtf have absolutely no clue what could have went wrong. And since the warranty only 90 days and has most likely passed I’m kind of worried bc after all I did spend 200 on this paperweight!