So I'm just about to get started

No, its ok as thats the beauty of all this. I’ll just speak for myself as I did the same thing just using my best judgement and wow was I way off. Now, though, do to this great site and people here, it is now so easy after 2+ months. You’ll be fine, I’m sure, just maybe a little limited at the moment. I promise you though that your flavor stash is gonna grow,lol. Mine is gonna grow insane. But back to you. Definitely use the Recipe Calculator for juice and trial and error. There are some wonderful teachers on here.

Obviously everyone does their thing differently, but I suggest making at least 20ml of each version, that way you have enough to test along the way as it steeps.

@Tupoar Dude the absolute worst thing that could happen is you’ll waste about $1 in chemicals if it goes south. Pinch your nose, hold your breath, and jump in !

Yea I did have a look up and decided to start with 8%. I’ve only got 10ml bottles so I have to go with that till the next round of spending (payday).

@chux72vette I’ve already got my eye on several new flavours

@Saxon2 Easier said than done when you have my confidence levels. Brightest of ideas, 0% faith.

just dive in , that dragon berry shake sounds good , remember its about you and there are no wrong ways to do something , if you like it then its the right way

Just go for it. As long as you’ve done your research…plan a recpie. Double check your percents, and then mix. Have fun. Do a mixing party. Turn on some music. Be excited that you are starting the diy journey. The road can be long sometimes…but have fun with it. Be ok with mistakes. Plan for a few bad mixes. Learn from them. It gets easier with time. Then you’ll know why many of us stick around and post 24/7…because from there it’s all about our lil’big diy family.

I was in the exact same place as you are about 6 months ago (more or less). As a matter of fact, I think I made a post similar to what you wrote.
6 months … and now I have so many recipes up there steeping, that I’ve lost count of how many there are.
The first one is ALWAYS the hardest one to do. Best thing you can do is just get the first one mixed and out of the way. The second one is MUCH easier.

The purpose of this post is to familiarize new folks to DIY with the ELR Flavors Database. There are many things a person should know prior to starting DIY E-Liquid – things that will help them maximize their investment in time and money, as well as avoid costly mistakes and wastefulness. ELR has a vast amount of information already which should help in this regard; and a little time spent doing research will reward a person by helping them bypass a lot of the hands-on experimentation necessary…

The purpose of this post is to provide people new to ELR and new to DIY in general to help them get started using the E Liquid Recipes Calculator. It's possible there are errors or points that have been left out and I'll lean on the community to help me edit the content. I see the same questions over and over...people confused over how to use the calculator and/or how to go about mixing their juice. The following is a user guide to making the most of the ELR Calculator First (and you proba…

Better than none like when I started out lol.

Don’t make me go all @Skullblade789 on yer ass

Those were the next words out of my mouth

After receiving such an awesome 'go get ‘em tiger’ last night I’d lie to present to you Dr T’s Dragonberry Milkshake rev 0.1 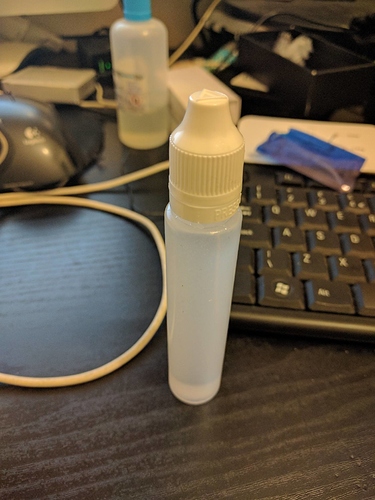 I’m going to let it rest tonight and then give it it’s first round of ultrasonic goodness tomorrow.

@Tupoar Dude the absolute worst thing that could happen is you’ll waste about $1 in chemicals if it goes south. Pinch your nose, hold your breath, and jump in !

Syringes are a pain in the ass. Mix by weight.

I prefer the syringe method just need practice… and gloves.

Ya I also recommend weight it’s easier and faster. I also think it’s more accurate. Just need a scale that measures to the hundreds! Also check out diy or die on YouTube the videos are super helpful to get to know flavor profile so you dont have to learn the hard way!