Just out of curiosity, whats with the mass posting of one person putting like one ingredient recipes, The people that put like 15 recipes in one day, back to back? Just curious, are they spies? Are they the guy/gal on the inside trying to tell us something??

That does sound fishy

15 recipes in one day

That doesn’t seem like much to me…as I could see myself doing that. Normally I mix from an app on the laptop, and then only once in awhile update the online aspect to match. (Far more testing than static data in my situation)

Besides, the single flavor testing would be good for those brand new to mixing in my book, since the ‘flavor data’ is only an aggregate. There’ve been a few times (once I finally find that soul who’s tastes line up close to mine) that I wish I had access to their specific info to compare (or at very least have a starting ground to leap from as I get new flavors. YMMV.

I wouldn’t say that. I mixed 16 recpies today. I could have easily posted all of them. Granted they may look a lot better than the ones I saw. But any and all info helps.

I looked at the last 7 pages of new recpies on my phone. I wouldnt call the ones I saw spamming. Just folks posting public recpies rather than private.

Personally I keep my notes private until I’m ready to post publicly. Then post everything all at one time. 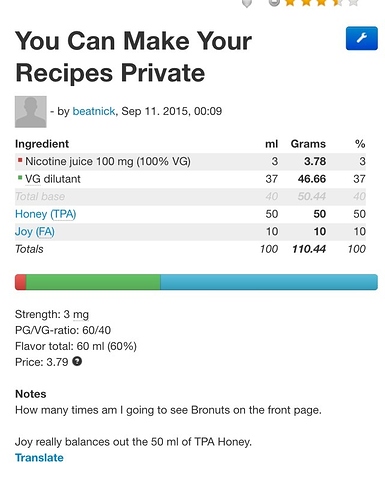 Hmmm i notice that also

I like more complex recipes myself but not over powering in flavour, must be a all day vape thats not to sickening, i never enjoy single or 2 flavour juices unless its a tobacco juice.

Ps
You can filter out single flavours thats a good feature on elr also i like doing a flavour search and seeing what flavours are most used together, another great feature

I probably did that when I first found this site and had ordered so many flavors. I kept them set to private though. I just wanted to get the flavor percents set to a recipe so I could mix up the single flavor and get a feel for it before making a real recipe with anything. I started with over 30 single flavor recipes but haven’t actually made them all yet. Most of them are still private.

I dont think of it as ‘not being creative’ per se, but rather that there’s different mixers at varying levels of progress. And I don’t believe that it’s necessarily a bad thing that those single (or even dual) flavor recipes are shared…but, I do believe that it’d be nice if there was a way (either automatically or a ‘suggested format’ in some type of ‘set of guidelines’ for the recipe side) to have additional options to search for single, dual, triple, etc flavor recipes, so that those at whatever stage, could advance to the next stage in their mixing knowledge a bit easier!

Until such time comes (or that such a device is/can be implemented) I personally think that it’d be nice if they were labelled eg: “(1F) Waffle” or perhaps “(2F) Waffle” meaning one flavor, two flavor, etc.

I don’t claim to have the answer… just tossing ideas out that have made the rounds through the cobwebs over the last few months.

Not sure if you knew this, but you can click on a flavor and toward the bottom of the page is a “Most commonly used with” heading that will show you that info.

Yes i use that feature alot JoJo

- and when i get to a stage with a recipe that i can say that i really like it then i’ll put it up on the board. another thing i’ve learned is to mark recipes as “favourites” rather than add then to my recipe stash. My head gets overloaded looking at all the new recipes that get racked up on the board every day

I’m a perfectionist so I keep my recipes private. My problem is pages & pages of recipes that didn’t quite make the mark which I don’t delete so I have a reference to my notes as to what worked, what didn’t work and why so I don’t repeat something I’ve already tried. I’ve started downloading some of my work onto my computer in effort to clean up my pages so I don’t have to look forever for something. lol
Even printed a small cookbook for myself & put some of my ADV’s on 5x8 cards in a recipe box to keep at my mixing station.

It would throw off mixing percentages eventually.

I’d give my daily quota of

I love the idea of having a number of ingredients listed somewhere. It’s overwhelming for a newbie to see 10 ingredients in a recipe. We can exclude single flavor recipes in a search but it would be cool if we could search for only single or 2 or 3 flavors.

I agree with Daath including folders, or some kind of system to implement private recipes, Alot of stuff I make I try to keep private until i’m somewhat happy with it. Reviewing should be more than just clicking the stars though i agree. I dont know if “spam” would be the right name for it, and i know we dont get paid or money for sharing these recipes, but like the recipe that was posted, how many bronuts recipes do we have to scroll though? I really like the search stash feature though, i have boxes and boxes of concentrates and its nice to be like… i wonder what milk chocolate would go with… mint/menthol? whatttt sounds good haha

I just posted a few recipes all together.
The reason being they had been mixed up and tested over the past few months, well a couple were from February.
I only tend to post recipes if I think they are worth sharing.
These had been sitting and mixed up a few times with some small alterations made to get them where I wanted them to be.
No sinister or ulterior motive behind it, just the way it worked out.

That’s wonderful! I’ve thought many times that it would be so helpful to be able to organize my recipes in different categories!!