Testing new flavourings - do I need to steep?

So I just picked up my first DIY stuff, and I have what may seem like a really stupid question. I know you’re supposed to steep e-juice to get the best flavour experience, but I have no idea what any of the flavours taste like on their own. I was wondering if mixing a small amount (like 1 mL total) just to drip and get an idea for what I’m working with would be a good or a bad idea?

For example, one of the flavours I got is Lorann Pear. I don’t know if this is a sweet pear, or more tart. I’d like to give it a taste test to find out, but I’m not sure if it would need steeping. if it does, how long would a single flavour need to steep for? I’m eager to get started on my DIY adventures!

Single flavors don’t always need a ton of time to age. I see that some will make a 5ml or 10ml tester. Then test a bit after 24hrs then 3 day, 7 day, and week to week depending on the need.

For a quick idea I drop a drip to the back of my hand, and lick it, that gives me an idea of the strength and the flavor. It’s said fruits don’t need to steep but IMO they do especially if you mix 2 of anything it will need a steep. Instead of mixing 1ml, mix 10ml and you can drip some and have some to put back for a steep.

You could give them a hot bath. Put them in a baggie if they have labels and set them in a bowl of hot water for a few minutes, then shake real good, reheat the water and repeat this a few times for about 20 min total bath time. Some people have a rice method which I haven’t tried yet but I intend to.

For single flavors, my limited experience, it’s good to try them right away and have a little left to test at a week, then two, then a month. Cream flavors can start out great from day one or some will taste and smell like sock sweat until the steep fairy waves her magic wand over it, usually a month later.

What I do when I get a new flavor in is make up a small batch, say 10ml using my preferred pg/vg ratio and no nic and use whatever I can find (either here or elsewhere) for a starting percentage of flavoring. I then try a bit on a freshly wicked velocity (or dripper of your choice) to see what it taste like fresh.

By doing a 10ml batch it leaves enough for me to try out shake and vape, as well leaving some to steep to see how the flavor improves with time. It also tells me, at low cost to myself, if the flavor percentage works well for my taste buds or if I should up it or lower it. After a while, you kind of get a feel for what percentages to run for a particular flavor company and how much steeping they require.

Test in 5 ml and microwave it for 7 seconds. Shake it, take lid off come back a few hours later… you could do that with a bunch of them and by the time you got to the end of your mixing you could start testing them. Just make sure you microwave in glass.

Simple to use the DRY white rice method, if you choose to.
Warm a bowl of DRY white rice in the microwave, then set your bottles in it.
You can doe the same thing in a crockpot.

You can test flavors in many ways, but you will not know their potential without a month’s aging.

One approach to pairing flavors is to think of baking, cooking, and making cocktails.
Read what the description is about the individual flavoring, check the ‘notes’ on ELR of each flavoring you are using, then think what taste(s) you wish to achieve.

While you are concocting, researching, pairing, etc. it is a great idea to have a couple of simple shake-n-vape recipes to have on hand, so you can let your other mixes age…sit still, leave them be.

The guide by @Scottes777 will start you in the easiest direction, BUT it will also tremendously help you in choosing the flavors to buy to begin with.

I shall return shortly with the edit and link.

Thanks! The guide was really helpful, and I took your advice on the rice method. Worked like a charm to give me an idea what I was working with. Wonderful!

You can always try swirling a drop of flavoring in about an ounce of water to get an idea of how it will taste. I usually use plain seltzer for this, though I also flavor my own seltzer with my flavorings too.

I usually try out testers immediately after mixing them, just giving them a really good shake (before I got all my fancy lab equipment) and then trying them on an RBA. I take initial impressions, because somethings are quite awesome shake and vape (in fact I prefer some flavors fresh over having been steeped.) Then after 24 hours I take another taste, then at 3 days, then at 1 week, then once a week after that until the bottle is gone…taking notes on the different flavor perceptions I get from the flavor and how it changes with steeping.

Since I’ve been doing this long enough, I can usually tell out of the bottle if I’m going to like something or not. If I get serious off flavors (the ones listed on the Devils Wheel of flavors-- google it for a copy of the wheel) out of the bottle, there is a good chance that there will be off flavors in the finished juice. But that doesn’t always mean that the flavoring is of no use, as sometimes those off flavors can be masked, or at low enough percentages won’t be percievable. And some flavors in the end just need a really good long steep (upwards of 3 months or more) before they are an awesome flavor.

I usually test flavors out in 10ml bottles, but lately I’ve just been doing up 30mls for the ease of it with my equipment. I’ve got a crap-ton of bottles partially vaped and still steeping all around me on my worktops. But I can tell you that your notes will be your gold in mixing, especially as you accumlate more flavorings. Give yourself good notes to work off of, even if you’re the only person who could read and understand them, that’s all you need. Because when you make an amazing juice that may have been meh when you first mixed it, and you pull it out of your steeping cabinet, or find it hiding behind your microwave (I just did that tonight) you’ll want to know you have the recipe and your notes. You’d think I’d learn this and follow my own advice, but I am sitting here vaping a bottle labeled Strawberry Melon Kiwi, that I think I mixed up about 3 months ago, and I didn’t like it at first, now it’s delicious and I’m hoping I can find the recipe I used for it! doh lol

Welcome to the mixing adventure.

I wish I had your energy
I track my recipes by printing them on the label w/ percents, If I find I like an older version I have to modify the master recipe off the label.
I couldn’t find devils wheel or is this it? http://www.eblong.com/zarf/flavorwheel.html
if that is not it can you post a url? and while you’re at it please compile your flavor notes and post that too

The link you have there is actually a pretty good article and it does list the off flavors. 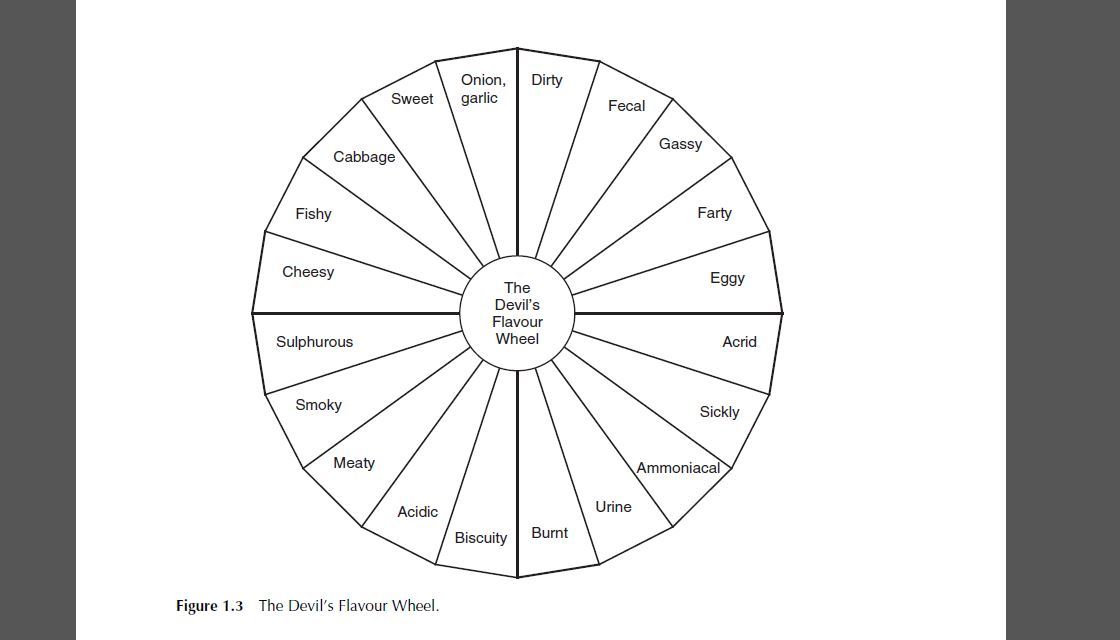 This capture comes from one of the flavorist books. The Beer and Wine flavor wheels (which there is also a list on the link you put up.) I use the language on these wheels in my flavor notes. Being able to identify good and bad flavors helps with taking notes and knowing where to go to fix the recipe.

And I will be putting up my flavoring notes on single flavors at my site diyeliquidmixology.com At the moment the site is a bit of a mess, I’m redesigning it and there isn’t much there right now. But over the next few weeks I’ll be adding more.

Some you do not have to steep others you do. Also do not throw it out if it smells bad. Give it a week or two then try it again. Patience can be key to making a great liquid.