Why are Cloned pieces of gear ok?

The only time I buy a clone is when there’s something I really like and the original company stops making it.

Let’s be honest here, the majority of vaping gear comes from one place, a place where everyone is in everyone’s business, who cares if you buy a clone or not, these big company’s are all doing the same thing.

E-cigarette Manufacturers Who Are They? Where Are They?

Most of the e-cigarette manufacturers in the world are located in a small area in Shenzhen, China. Some are amazing, some not so much!

Here’s an interesting read on clones…

Hi Everyone, I've been living in China for the past 3 years, and vaping for the past 5 or so. First started on 510 sticks, went to eGo, then to a...

I don’t own a clone of any vaping device but I do use generic medicine. I have downloaded movies off the internet using a Torrent. I don’t do that anymore because my internet provider threatened to shut down my internet if I didn’t stop. So while I don’t seem to have a leg to stand on when considering the ethical part of this argument I do think it is wrong to use cloned products.

I also don’t want to pay through the nose for things I need just because some company want’s to make lot’s of money off their product. I think there should be a specific time limit that is reasonable and then it’s public domain much like generic medicine is. I find things like books that are over 100 years old before they are public domain a bit ridiculous as well as movies and any other stuff. Once something is over 25 years old It should be okay to make copies without repercussions. Give the product inventor time to make some money off their ideas but make that time reasonable.

I think there should be a specific time limit that is reasonable and then it’s public domain much like generic medicine is. I find things like books that are over 100 years old before they are public domain a bit ridiculous as well as movies and any other stuff. Once something is over 25 years old It should be okay to make copies without repercussions. Give the product inventor time to make some money off their ideas but make that time reasonable.

Good luck with that !
https://artlawjournal.com/mickey-mouse-keeps-changing-copyright-law/

It’s about buying a cheaper piece of gear that is at least as good as the original, which took a lot of time and effort to create and bring to market.

The above quote says a lot.
While I do often believe in purchasing items to ensure the original person makes a profit from it, I also look at the value from my own self interest (hey at least I’m honest about it). I do agree with others stating that the clones shouldn’t have the same logos or trademarks, they should be known for what they are, clones, but lets be honest, should we all be driving Ford cars (or whatever the first car made was)? We can talk about clones in drugs… “generic brand” and we can talk about clones in Televisions also, I guess it really depends on how you want to term a clone. I look at the term as “made in the same design as” I don’t always purchase Libby’s canned corn, but bought “Best Choice” today… and the Nitequil I used last night was a generic brand but if you look on the bottle it says something like “compare to Nitequil” but I didn’t feel a bit guilty when I had purchased it either.

why is it ok the clone a ejuice recipe ?? not exactly the same things but it is the same principle, i wonder how you feel about that ??

This was just going through my head as well! Wonder if he mixes clone recipes!?

For that matter go to a grocery store. Thomas’ English muffins sell Thomas cinnamon raisin bread and so does Pepperidge farm. Who cloned who there!?

I’d say its cool if its for personal consumption, but if a factory in China started selling clones of one of your recipes and making profit, I’d be against it. Especially if it were named and labeled like the original.

so is it cool if a diy mixer clones a commercial juice and sells it ???

In fact this has happened and the fallout was nuckin futs. Friends fought, friends were lost and everyone on the reddit subs ECR/DIY witnessed it, it was quite sad. Every once in awhile the argument is rehashed.

Besides not being any good at it this is one of the main reasons that i dont and wont clone a liquid.

So i got curious about my little story and did some searching. The fella that cloned the liquids, there were two, is still in business while the company who’s liquid was cloned seems to be gone.

It was Grizzly Vapes Polar/Nanner Bear who’s liquid was cloned, the fella spent months and months cloning it, if i remember correctly.

In fact the fella, project_twenty5oh1, released the recipe to the public and a year or so later went into business selling it. He did sell small batches on reddit before he released it.

They are now sold as Prairie and Snowdrift and they are a couple of my favorites. Before anyone gets really angry about this the context is important, this falling out was harsh and it happened long before any sales of it, if i remember right.

Personally i feel if you work on something like that, put in that much time, money and energy the recipe is yours to sell. This is quite a bit different from cloned gear where you have a tangible object, IMO.

Nooo, I guess I wasn’t thorough in my response. Nobody should be selling anybody else’s creations without an agreement with the creator.

taste is subjective, i know the clone was not exactly the same as the original, but i don’t like it without tasting it

recipes are different (imo). you cannot copyright a flavor
Furthermore I wish device cloners would use all high quality parts (grubs) and I would be more receptive to using one.

Haven’t read everybody else’s comments yet. But my take, this was more prevalent a couple years ago, when a good rda or rta was $50 - 100 bucks. Now top quality rdas can get for $20 - 30 there is no need to buy a clone.

When I was targeting certain RTAs to fill out my vape stash, I had 2 main ones. The first was the Joytech Ego / Tron line. Love the rebuildable CLR coils. Since Joytech stopped making them and retailers started clearing them out at reduced prices, I was able to get originals at very good prices.

I felt a little dirty, but I took that $880.00 I saved, and rubbed it all over myself, and felt clean as a whistle again.

It turned out that SvoëMesto had discontinued the KFL+V2 anyway. It wouldn’t have made any difference in my decision though, if they still had them in stock. I understand a business has overhead and expenses, but so does my business, which is my family / household budget. I’m sure SvoëMesto didn’t scour the planet for the highest quality materials, regardless of price. They got the best deal they could, on materials that met their requirements, like any good business does.

I did the same thing.

I’ve been thinking about the kayfun situation particularly since it came up earlier. This is where the “China factories stealing from Chinese factories and who cares” attitude really irks me. In this particular instance, we are talking about German Engineering. It’s one of the big things the Germans are known for. Beer and amazing engineering. When you want it, you pay for it. Like a Rolex. If you can’t afford a $10,000 watch, you should probably buy a Timex, not a knock-off Rolex. The knock-off won’t work like a Rolex, wont be made of the same metals and inner workings, only stands as a trick to fool people into thinking you can afford a $10,000 watch. Not the same thing as the kayfun, I know, but you get my point.
I won’t be supporting the knock-off industry. You guys and gals that are ok with it, I’m ok with you, I’m not the knock-off police! I just wanted more insight to help make up my mind and to understand how it works and you’ve all been very helpful and informative. Thanks!! 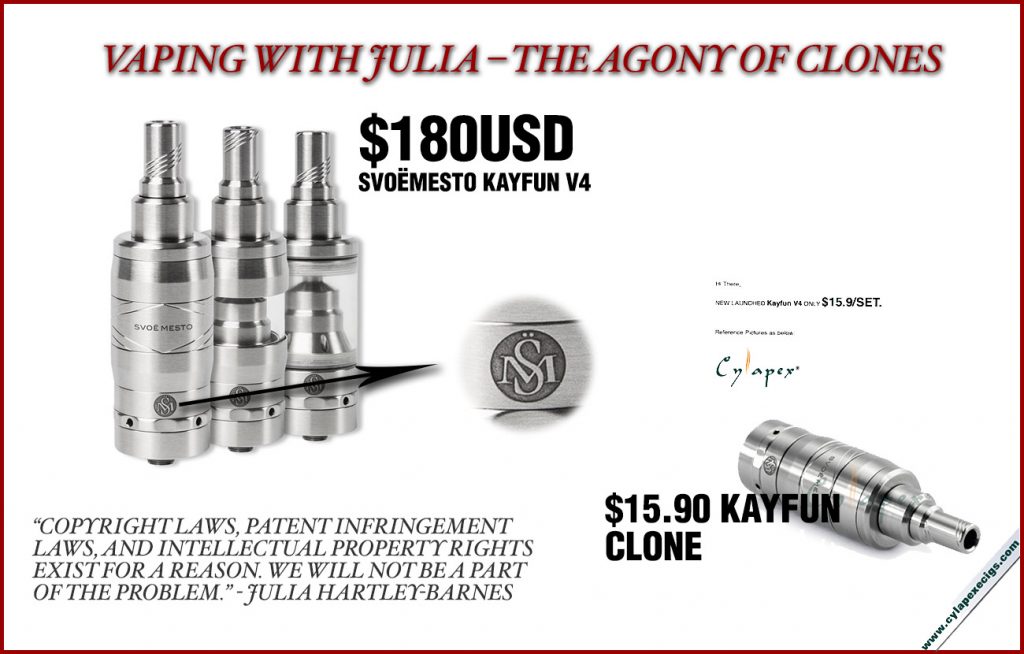 The Agony of Clones

Vaping With Julia – The Agony of Clones One of the most exciting product launches in the past few months has been the long-awaited, long-anticipated release