Hello I recently switched from mixing 24mg/mL nicotine base that was 50/50 PG/VG ratio to using 100mg/mL that’s 100% PG base to make a 12mg mix due to the fact its much cheaper to do so. Before I switched I did research regarding to using a nicotine concentrate this high however I keep seeing conflicting information. My question is should I mix my 100mg/mL nicotine before adding it and if so how should I do so? When researching I’ve seen people say to shake it but at the same time I’ve seen people say that you should never shake it because it will increase the rate at which nicotine oxidizes. I’m sorry if this has already been asked in the past but when I try to look this up on google the answers seem to be all over the place. I have both 60mL and 120mL amber boston round bottles with a polycone cap to store the nicotine in, I’m just waiting on an answer. Once again, sorry if this has already been asked and thanks for any help you provide! 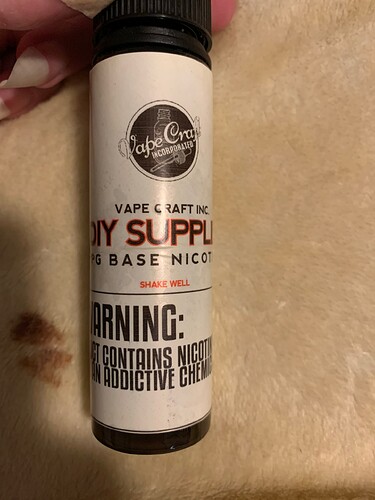 image1920×2560 204 KB
Someone else might give you a different answer, I just trying to help based on my limited knowledge….before I knew I could buy nicotine in bulk and freeze it, I had ordered a couple of these little 60mg size bottles of 100MG nicotine and as you can see, it says on the bottle “Shake Well”, so I always shake my nicotine before adding

My question is should I mix my 100mg/mL nicotine before adding it and if so how should I do so?

I always add my nicotine first. That way I have the correct amount of nicotine by weight. If I screw up I can pour some back into the bottle and if I’m short can add. I use a blunt needle and syringe to transfer my nicotine to my mix bottle.
It’s the way I do it but you can add your nicotine at anytime.

I keep my nicotine in the freezer till I am ready to defrost my working bottle. Since you have a PG base like I do You are less likely to get hot spots in your bottle. I don’t shake it. That was done before I subdivided my nic into smaller glass bottles. Good luck in your DIY adventure.

I always shake my Nic (PG Based) before mixing as well as my flavor concentrates with no ill effects. 60ml of 100mg Nic is the most I have out of freeze at a time. The truth is oxidation effects flavors before nicotine, the biggest culprit is Heat and UV light that effects NIC…
Now let the leftist anti-oxidizers bash away …

I was just looking this up last weekend. As the OP stated, the answers are all over the place. What I took away from my internet search, the reason to not shake it is as stated above, accelerated Oxidation of the Nicotine. The reason to shake it is to eliminate the chance of a Nicotine hotspot should the Nicotine be not fully suspended in the carrier solution, be it pg or vg. At least one manufacturer has a lable stating to not shake it. As shown above there is at least one saying you should shake it. My PurNic I bought from Nicotine River (RIP) doesn’t say anything in regards to shake or not to shake (that IS the question)

I see in one hand a little bit of premature Oxidation and in the other hand a risk of getting a hotspot while using 100mg/ml Nicotine. That’s 100mg/ml, a hefty dose. So what would a hotspot total out to? By definition it would be greater than 100mg/ml. To me the answer is obvious, shake it rather than chance it. I decided not to shake the crap out of it. I just gave it two shakes. I figure that will break up a stagnant hot spot while I pour it into a smaller container.

I am inclined to believe that any major manufacturers will process it so the Nicotine is in full suspension and shaking will not be necessary. Then again, “do you feel lucky punk?”.(Clint Eastwood in case you don’t recognize the quote).

If I were ambitious I would buy those Nitrogen kits for Wine, top the Nicotine bottle with Nitrogen to displace the Oxygen, then shake the crap out of it. But I am not very ambitious. Two shakes is so easy and instantly rewarding. I have vaped several different brown Nicotine bases (brown from Oxidation) and I have never notice any I’ll effects.

@OneLeggedMoose the thing to keep in mind is hotspotting NIC can be dangerous, and oxidation is an annoyance. As stated above, always shake your NIC before using. Break it down into smaller bottles, using only one till it’s empty. If you have bigger, long(er) term storage glass bottles, topping them off with Argon or another inert gas will extend your storage.

the thing to keep in mind is hotspotting NIC can be dangerous, and oxidation is an annoyance

I’ll take a minor annoyance over danger, every time. Like most things vaping, everyone has their personal groove. I shake the nic in it’s original container before breaking down into glass bottles for freezing. For lack of a better term, I’ll call that repeatable uniformity. Every bottle coming out of the freezer should be basically identical.

The basic rule of thumb is when we add something to a bottle, we shake it. Premix a base? Shake it before using. Adding flavors? Shake it first. Recipe mixed? Shake it and let it steep, shaking it occasionally. Filling a tank? Shake the bottle first.

To quote Jerry Lee, ‘there’s a whole lot of shaking goin’ on’. I don’t think one more shake in the process (the initial nic shake) is going to create enough additional oxidation to notice.

And don’t forget. Shake it more than three times, and you’re playin’ with it.

Lots of good advise already. I agree. Break a large bottle down to a smaller size.

Then for me…since I will makeup 15-25 individual recipes every couple weeks…I dispense vg/pg/flavors for all my mixes. Then when ready I add the nic in one full rotation. I shake up the nic really good (yes I have had a hot spot issue with nic suspended in pg once which is why I do this)…then add to each mix. Takes about 10-15mins for me to add the nic.

I’ll take a minor annoyance over danger, every time.

That’s how you do it @d_fabes.

I prefer to swirl! And I pre make my base now in larger bottles. I’m not some one who needs to be exactly to the decimal point either. I like every mix I do to be a little different anyways.