26650 batteries, which are the best ones 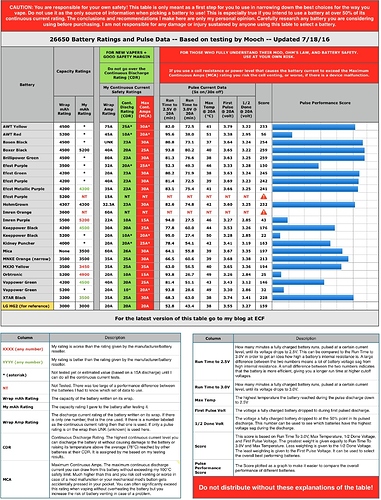 I’ll be interested to see what people say here. I don’t have the answer…,but the reviews I’ve seen folks are that impressed with the 26650’s availble and run into weak battery issues when running at the slightly higher watt ranges. This resulting in recomendations of using the 18650 battery in the device.

So my take on that was to buy a dual 18650 device to get the same battery life. Or indented battery life which was my initial desire when research the 22650 devices.

What’s really cool is that company’s are coming out with the smaller form factor dual 18650 devices. Like the ipv6, ipv400, singles 213, and ect.

That’s true, hence most all of my mods have 18650’s but surely with all these new mods that are on the market with the option of 26650 or 18650 you would think battery manufacturers would be jumping on the band waggon to bring out newly designed 26650 cells.
Theres a fortune to be made if they can come up with a decent cell.
I’m going to have a go of the efest green and the metalic purple and see how i get on with them.
They seem to be the better one’s to try anyway.

Got some Basen Blacks and a new version of the red AWT. Both are pretty good, I get the feeling that the new red AWT runs cooler than the Basen Blacks, by quite a bit - 10-15A. Only downside is it’s rather long, so it stands out on a VT75.

I’m trying to go for the higher amp rating on the batteries, not that i build too low with a single cell mod, but just to give me that " buffer zone".

I would go with the brand that I trust, Samsung, as I replace batteries they are being done so with Samsung.

I don’t see the point of them. Many reviewers/testers have shown that they don’t offer anything above 18650 batts, they just make mods … fatter … for no real good reason.

I used to do the same when buying my cells. Went for the best in my eyes, VTC4 that is (don’t trust my vendors enough to buy VTC5s). But at some point I realized that I normally vape between 20 and 35 Watts, so having a VTC4 is overkill - so for my regulated mods I went for 30Qs. Let me tell you this: it’s almost always pink cells on my charger nowadays and I rarely charge anymore (every third day approx., while I used to charge stuff daily).
OK, but back to 26650s. Although buffer zones are always recommended, there’s no need to make the buffer zone too big (see VTC4-30Q above). On the other hand, mooch pointed out that the bigger mAh 26650s with lower A ratings didn’t really offer any more runtime, so I’d recommend just go for the 4200mAh ones. But, I have to add, the currents he tested with are way higher than what I use.
Anyway, bottom line is, my Basen Black and new red AWT (not the one mooch tested) are enough for almost two days of vaping, so I’m good.

From what I’ve heard, 26650 batts burn out quicker than 18650, and don’t actually offer any pros. Just makes me wonder what’s the point?

I build mods, single 18650s, dual parallel, single 26650s you name it, I’ve been building 26650 mech mods for a couple years note and I have found the green effests to be the best. They don’t die really quickly like the purpple ones with the higher amp rating, but I push than pretty low and hard and they seem to hold up really well. Yeah I know I sound like an idiot recommending an effest cell, but the problem is that there just are not many 26650s to choose from. These ones I believe are 4200mah so there a bit more life in them and they will handle low sub ohm builds. As always, be smart and safe while using Batteries. Good luck. …I’ve also had lots if customers swear by the keeppower I think k it’s a 5200mah, something like that, buy i have never tried them personally.

Thank you for all your input guys @TBEV @Uncaged @Naseschwarz @Chrispdx @GPC2012 some interesting insights to this subject.
I will try the green efest as the general consensus is they will do the trick.
I don’t really build that low on a single batt mod anyway, generally 0.2-0.4 ish so the green efest 26650 should do the trick.
Hopefully with all the mods out there that now take 26650 batteries, battery companies will release newer versions and give vapers better choice.
Here’s hopeing.

Thanks bud. Don’t squonk but good to know.

This is the first 26650 I’ve tested that acts like an 18650. Its
internal resistance is lower than many of the good 18650’s and it held
its voltage well. At 30A/100W pulsed it ran approximately 75% longer,
and 0.15V-0.20V higher, than the Basen and Brillipower 4500mAh cells
down to 3.2V. It doesn’t match the appearance of any other 26650 I have
so I don’t know where this cell came from. I am giving this cell a
maximum vaping amps (MVA) rating of 40A but the voltage sag is getting pretty bad at this level.

Good to know and thanks for the heads up. Now to try and find then in the uk.

Just received my set , it’s good to see a battery manufacturer including a scratch and check on the battery wrap 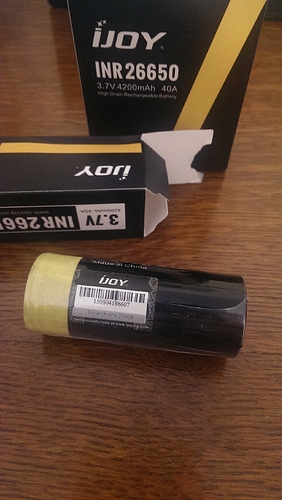 Mine were posted yesterday, so kinda hopeful it’s tomorrow.