A battery discharge testing---discharge at 10A

A battery test machine called West Mountain Radio CBA, The battery is Gpower.
When prepare for testing, the red light off. When start, the red light on. After finished, export the curve table.
From the curve, we can read its capacity. 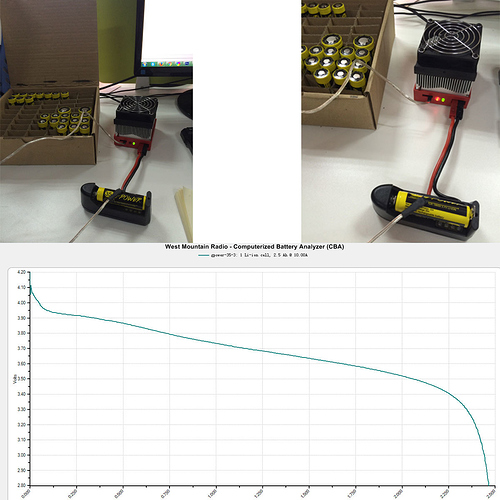 I have no idea what this means, can you explain what this does?

What is the bottom row of numbers on your graph?

From the curve, we can read its capacity.

The capacity is usualy written on the side of the battery??

The left side is volts, the bottom is Mah.
Even though a battery has the Mah capapcity printed on it, it doesn’t mean it will hold that much…especially after charge cycles.

So this is to test your old battery’s output or would you do that with new ones too??

The Opus BT-C3100 charger will allow you to read the capacity. [mAh]
I check it on each battery after charge is full. It allows me to know when to recondition them.

I also check each new battery when I get them. It will allow you to spot fake or used re-wrapped batteries.

That opus sounds good, gonna go see how much one is…

The capacity is usualy written on the side of the battery??

Unfortunately there are many brands that highly inflate those numbers on the wrap.

Ive just seen an example of that here: