I won this kit in a giveaway from @Heaven_Gifts . Regardless of that fact, this review will be as impartial and unbiased as possible. It took a while for the parcel to arrive, but I can only blame holidays both in China and Israel for that, and the inefficiency of Israel post.

I received the kit in a black nylon-wrapped box. Both seals under the nylon were intact, and both stated that this is a sample (for testing only). 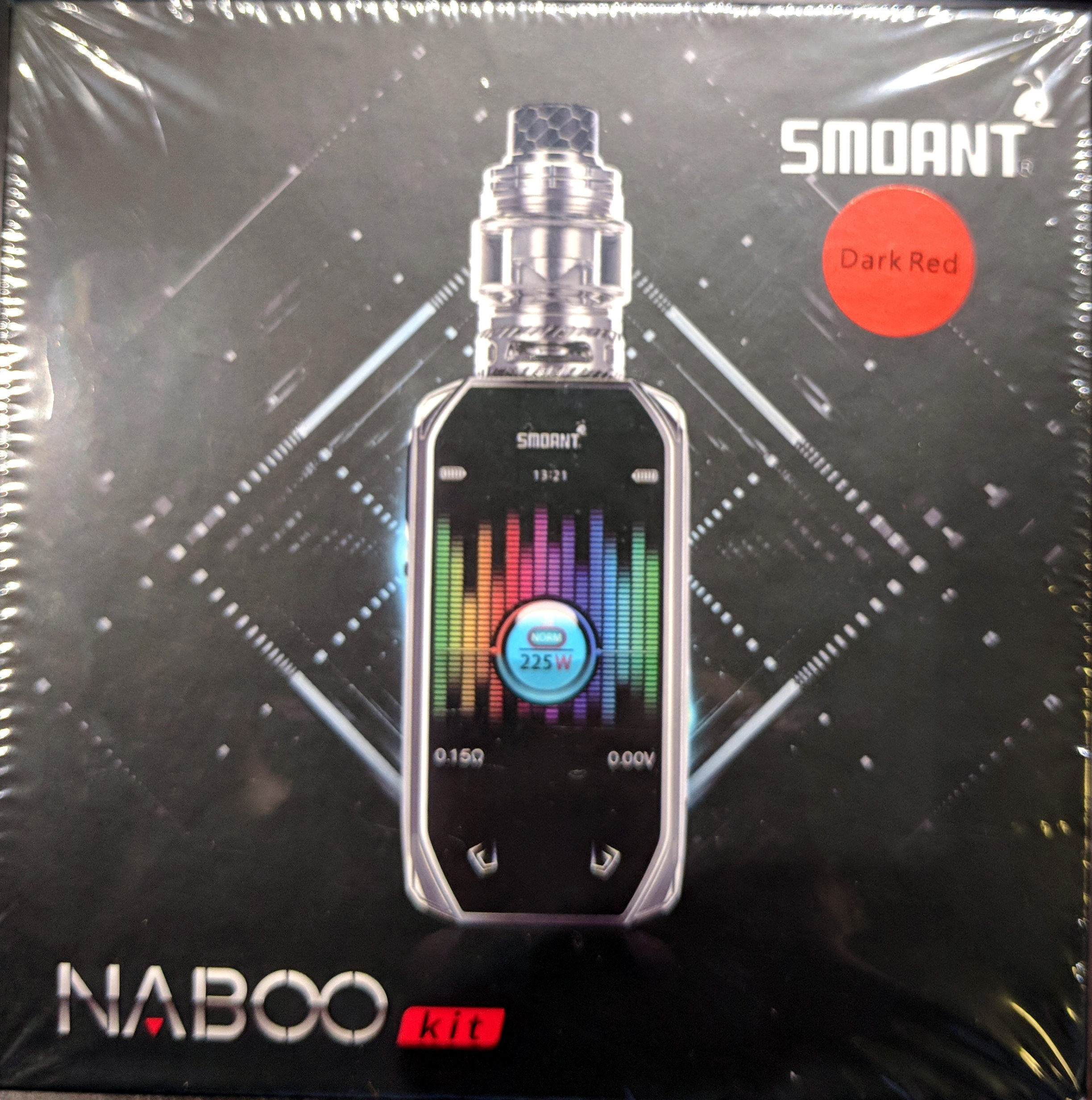 First thing I noticed about the mod is how glossy it is. The whole front face is smooth and shiny (and an obvious fingerprint magnet). The tank came in the same color as the mod except the drip tip which looks very nice, but is just not in the right shade for a perfect visual fit. I’m usually not a stickler for details like this one, but it felt like there isn’t enough attention to detail. 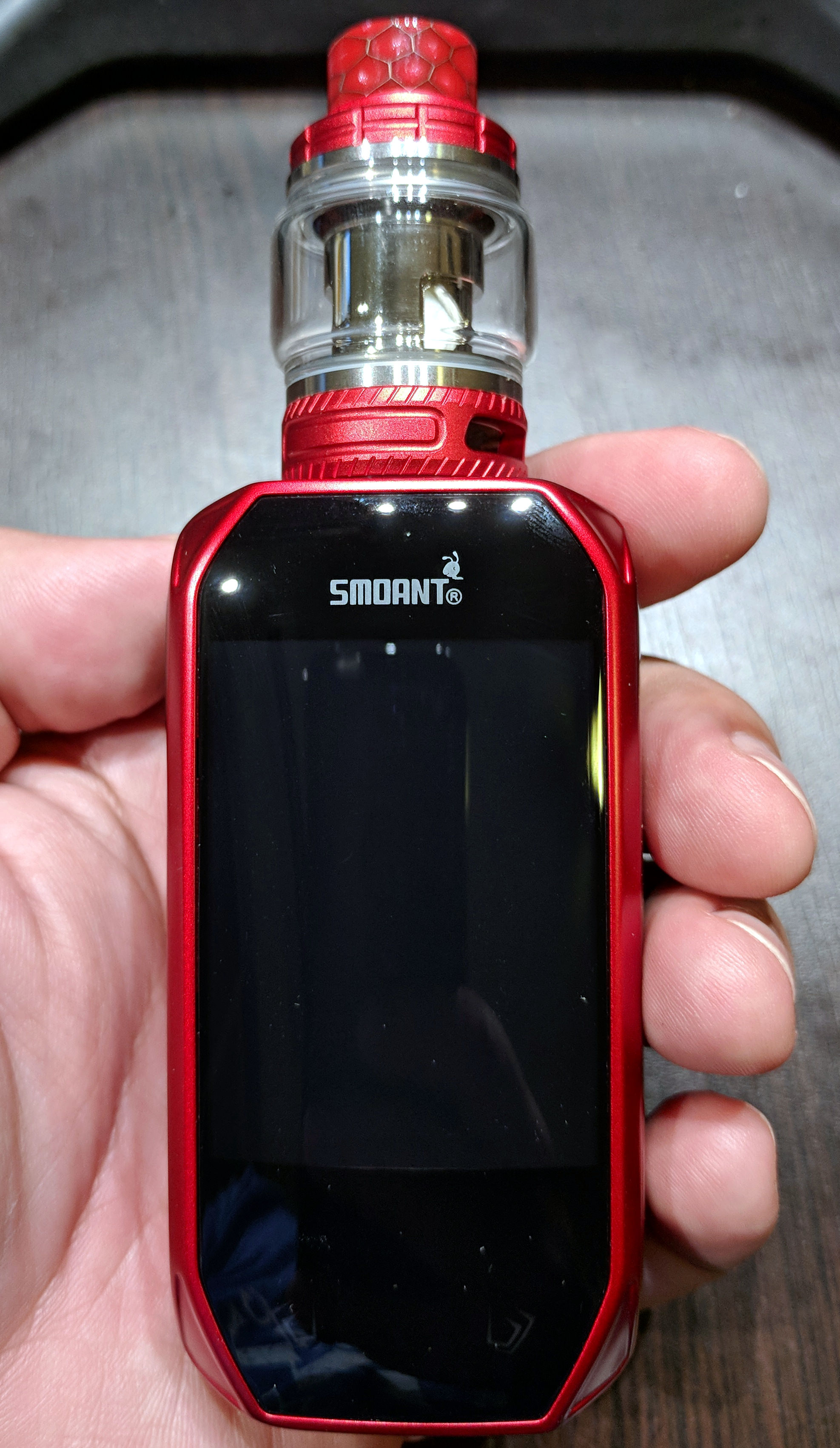 And the time came to assemble the tank and fill it up with juice. Preinstalled coil is a single mesh coil, surrounded with what looks to be organic cotton. The coil is rated at 0.18ohm, and the wattage recommendation for it is 40w-80w. The second coil is 0.17ohm, and is rated for 60w-100w. I gave the tank a quick wash, primed the coil, filled it up with my favorite ADV juice, and let it sit for a few minutes to let that tightly compressed cotton soak up the juice. 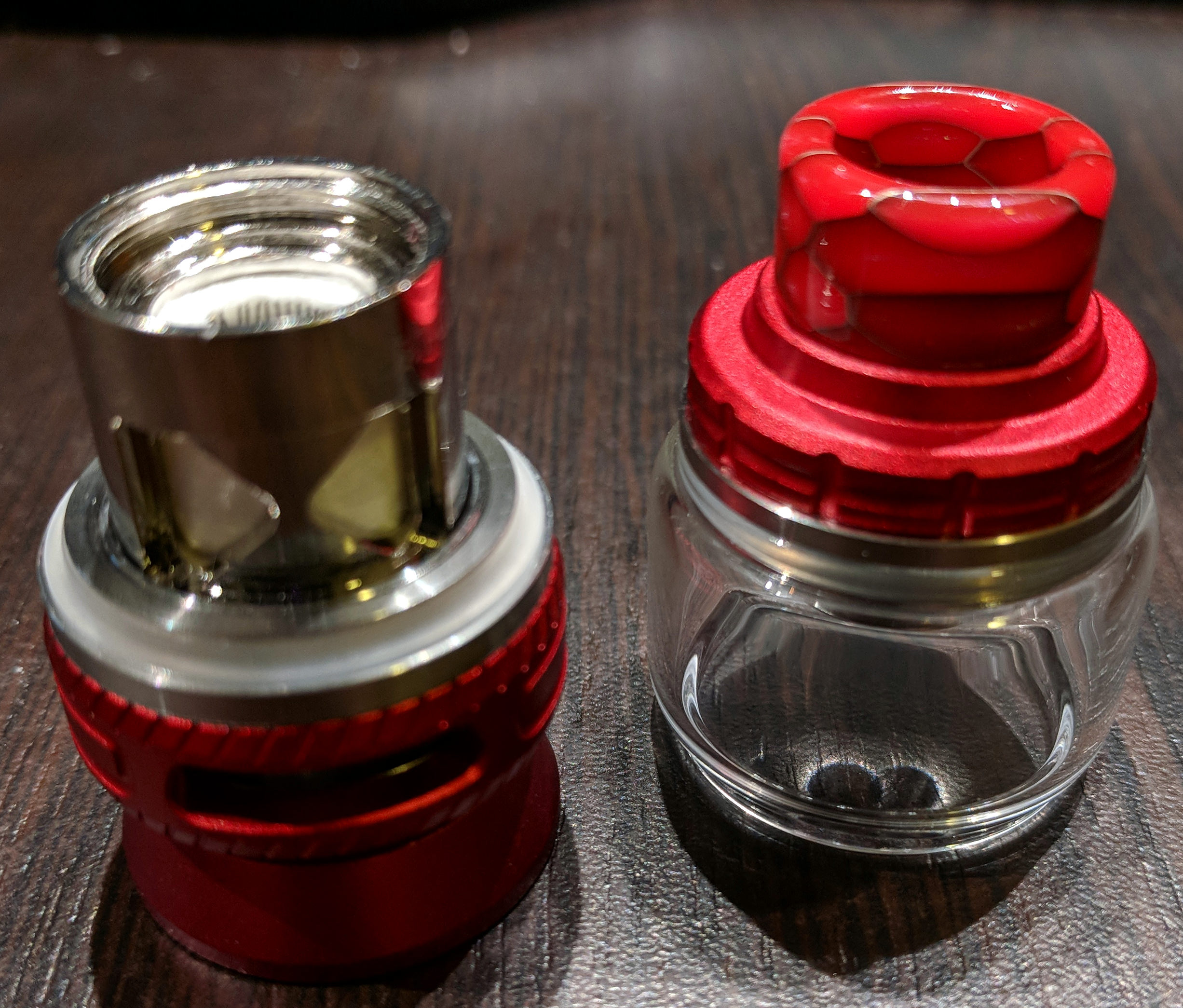 The overall impression I got from the tank can be summarized in one word: cheap. Top cap and the airflow ring are made of aluminum, and the rest of the tank is claimed to be stainless steel, but it just feels too light. The finish is painted on, and will probably chip very soon. On the other hand, it has next to no chimney and the coil is very close to the drip tip. Airflow is very noisy in any position. 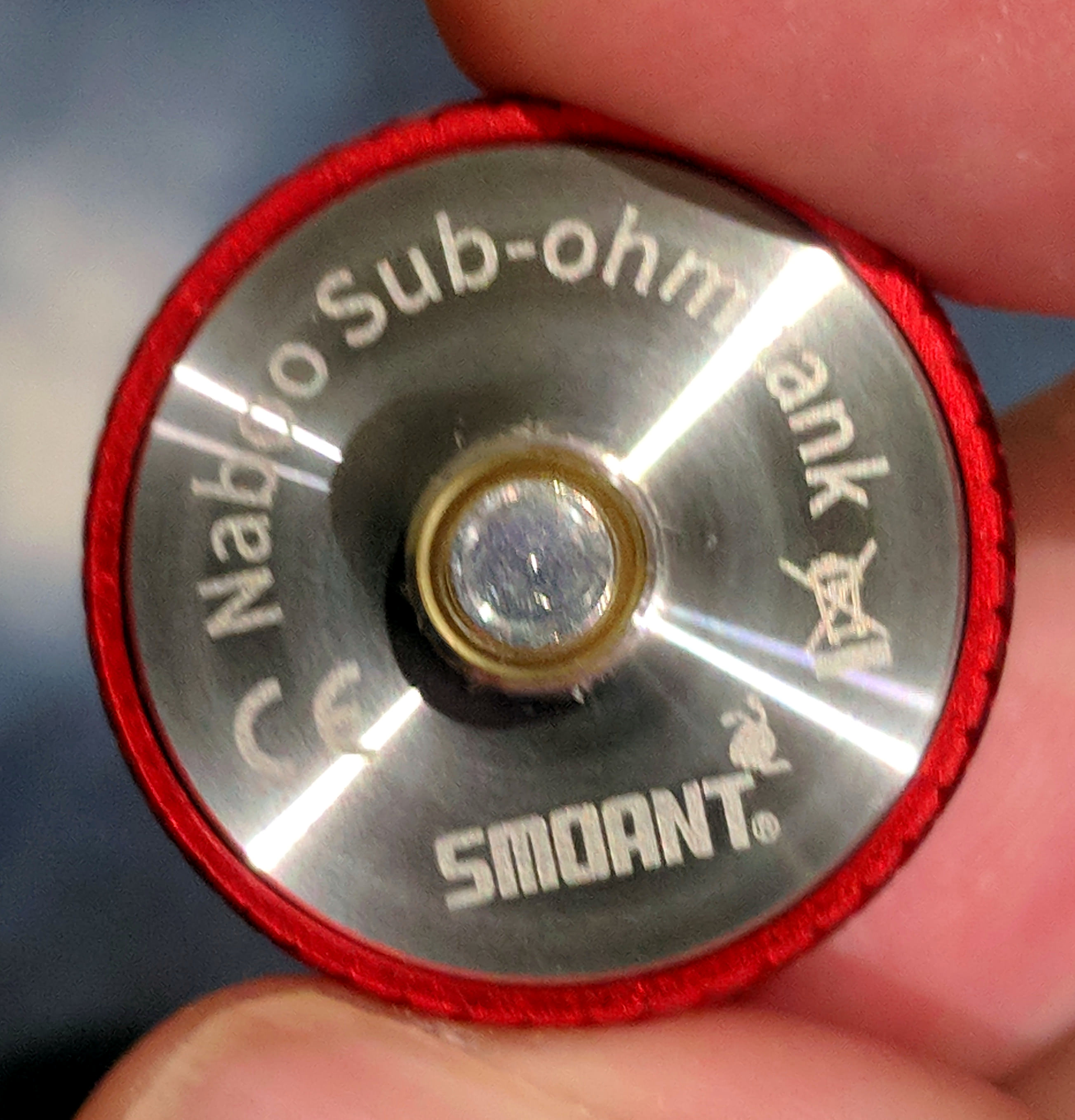 And then there is the flavor which is what should matter the most, and this tank has tons of it. I started the coil break-in low, at 45W, and after a few puffs started taking it up toward 60w. Once I got there the flavor was spectacular (for a sub-ohm tank). It can’t really compare to an RTA or an RDA, but from all subohm tanks I tried so far, this one definitely has the best flavor. With the first tank i had a little chemical aftertaste, but it disappeared pretty soon after first refill. 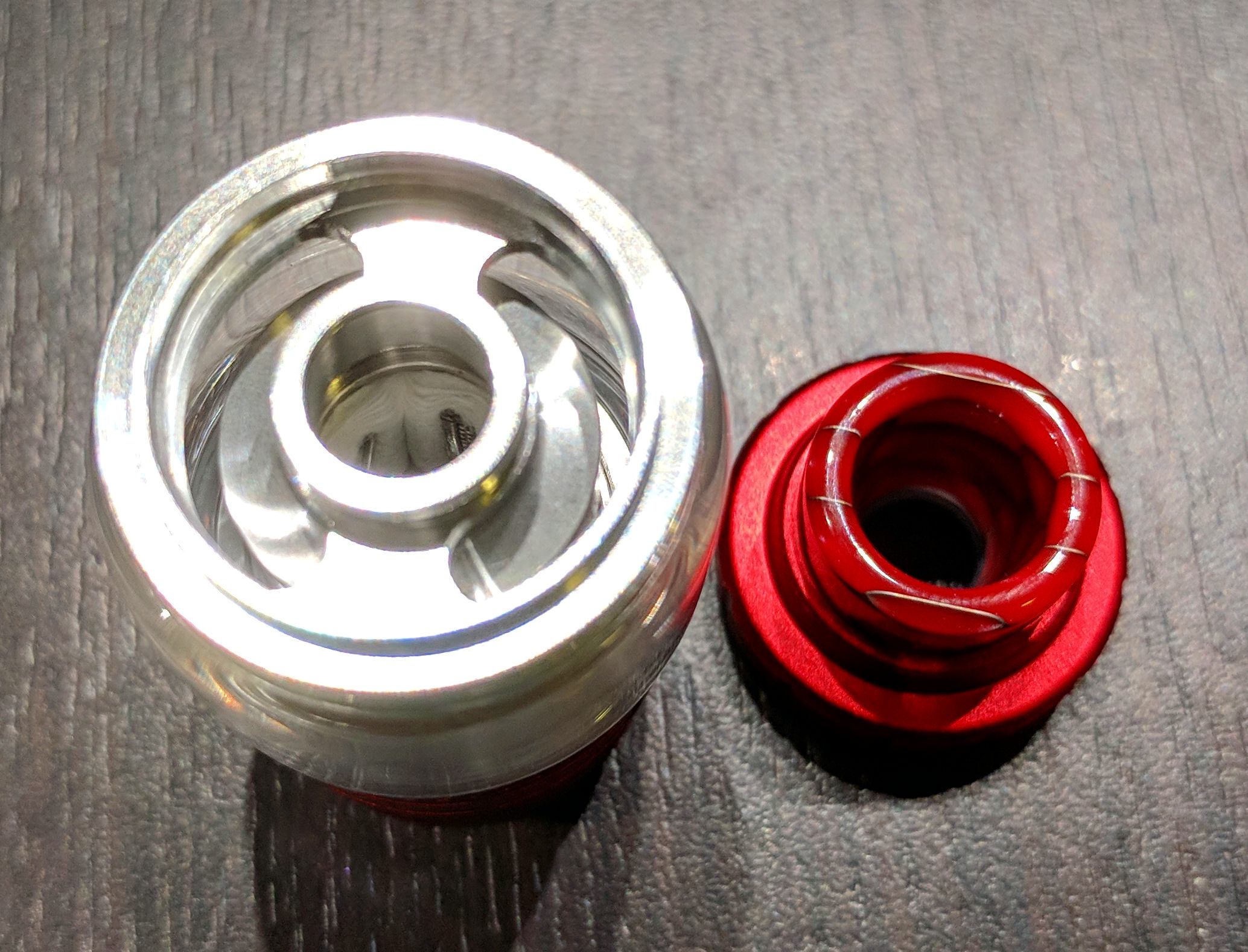 Too bad this coil lasted only 3 days. I used it almost exclusively for 3 days, and without any warning I got a burnt hit. You can see from the photo that it got completely gunked up, and I vaped a juice with very little sweetener added. I guess that really sweet juices can kill this coil in a day or less. Cloud chasing wise, this tank definitely hits the spot. Clouds are huge and thick, and if I cared for them I would like it even more. 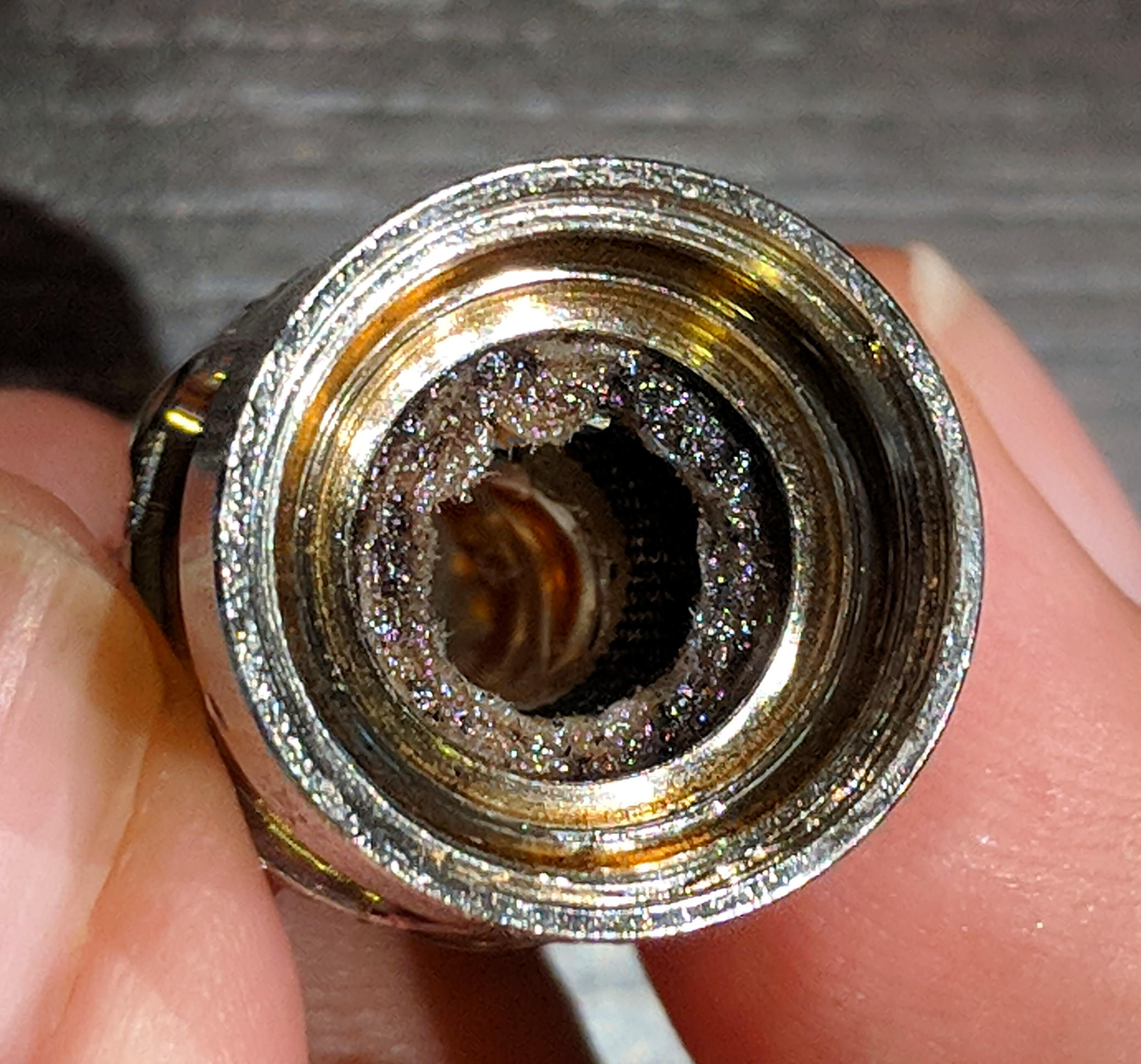 Important to note, I still didn’t see anyone selling replacement coils for this tank (or even listed on Smoant website) but the coils are compatible with Smok TVF12 series coils.

If I would rate this tank on a 1-10 scale where 1 is total junk, and 10 is best tank ever, these are the marks it would get:

The mod looks very nice overall. Body is constructed from zinc alloy, it’s pretty light weight, and it has a huge front screen, and the back cover has a nice hex patterned fingerprint magnet built in.

Battery cover is held in place with three magnets, and it’s held in place really well. Inside the battery compartment I saw my first nasty surprise. Batteries rest directly against the PCB when inserted.

I can understand that they wanted the mod to be as thin as possible, but this is just a bad practice. Juice can leak into the battery compartment and onto the PCB, and that is a very nice recipe for a disaster.

The top of the mod has a centered 510 connection with a gold plated center pin, which is spring loaded. The mod can easily accommodate tanks up to 27-ish millimeters in diameter without overhang. 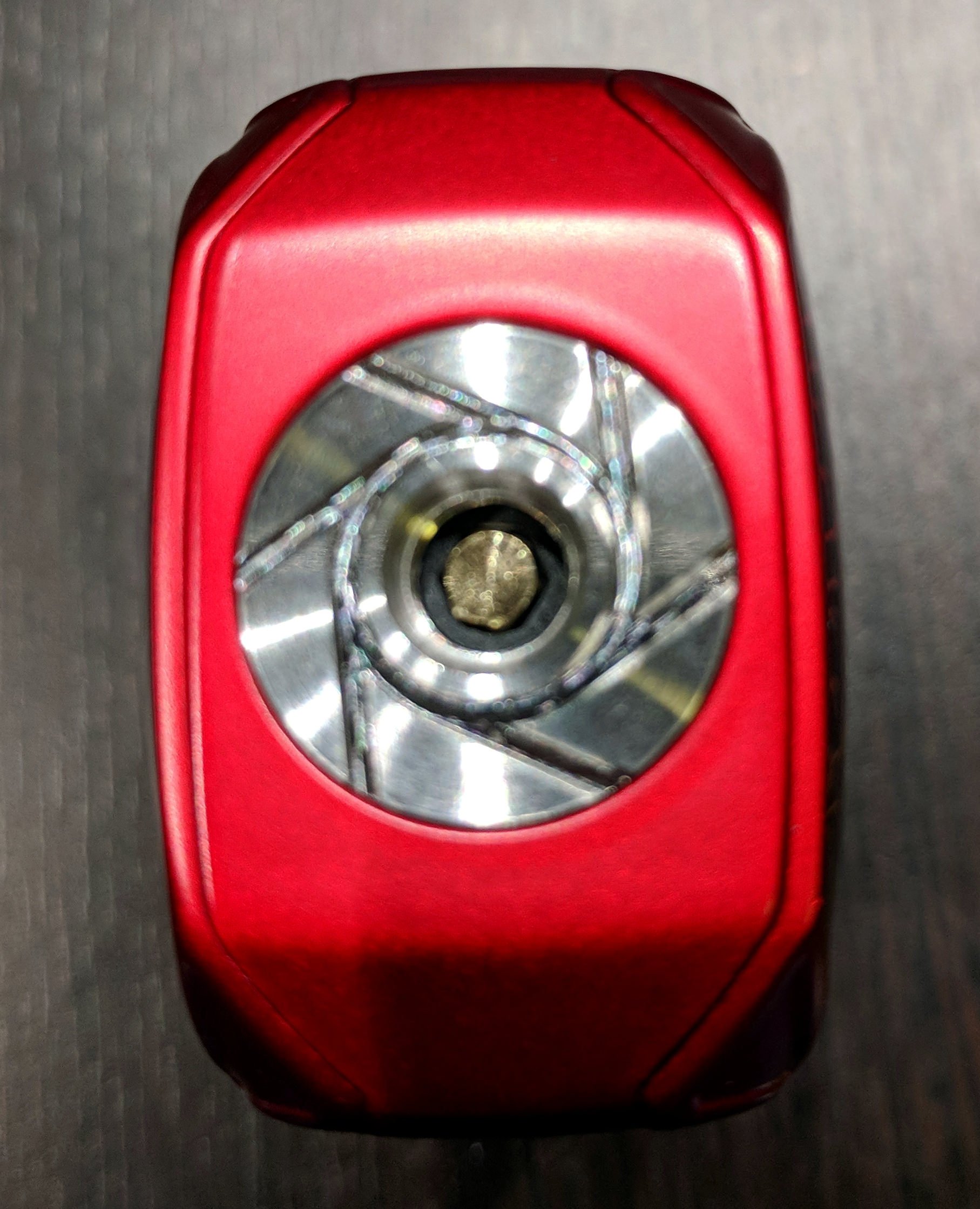 This lock can be a bit deceptive, since it won’t prevent the mod from firing. Long press on the lock button will put the mod into the stealth mode with the screen off. One more thing I noticed with the lock function is that it will disengage for no reason at random intervals, whether the mod is in stealth mode, or just the touch buttons are locked.

The screen itself is very bright, but the brightness can be adjusted from the menu. The touch buttons have ‘tactile feedback’ (or let’s call it vibrations) which work for single presses. Long press on a touch button will vibrate only once (at least something :D). Vibrations can be turned off from the menu, and regardless of how much I dislike them, they are useful especially when the mod decided to unlock the buttons and you give them the lightest touch.

Menu system is fairly easy to navigate. Three quick presses on the fire button will enter the menu, which is further navigated with the plus and minus buttons, and presses on the power. To go back one step, just press the power button for about three seconds. Of course, the mod won’t fire when in menu. 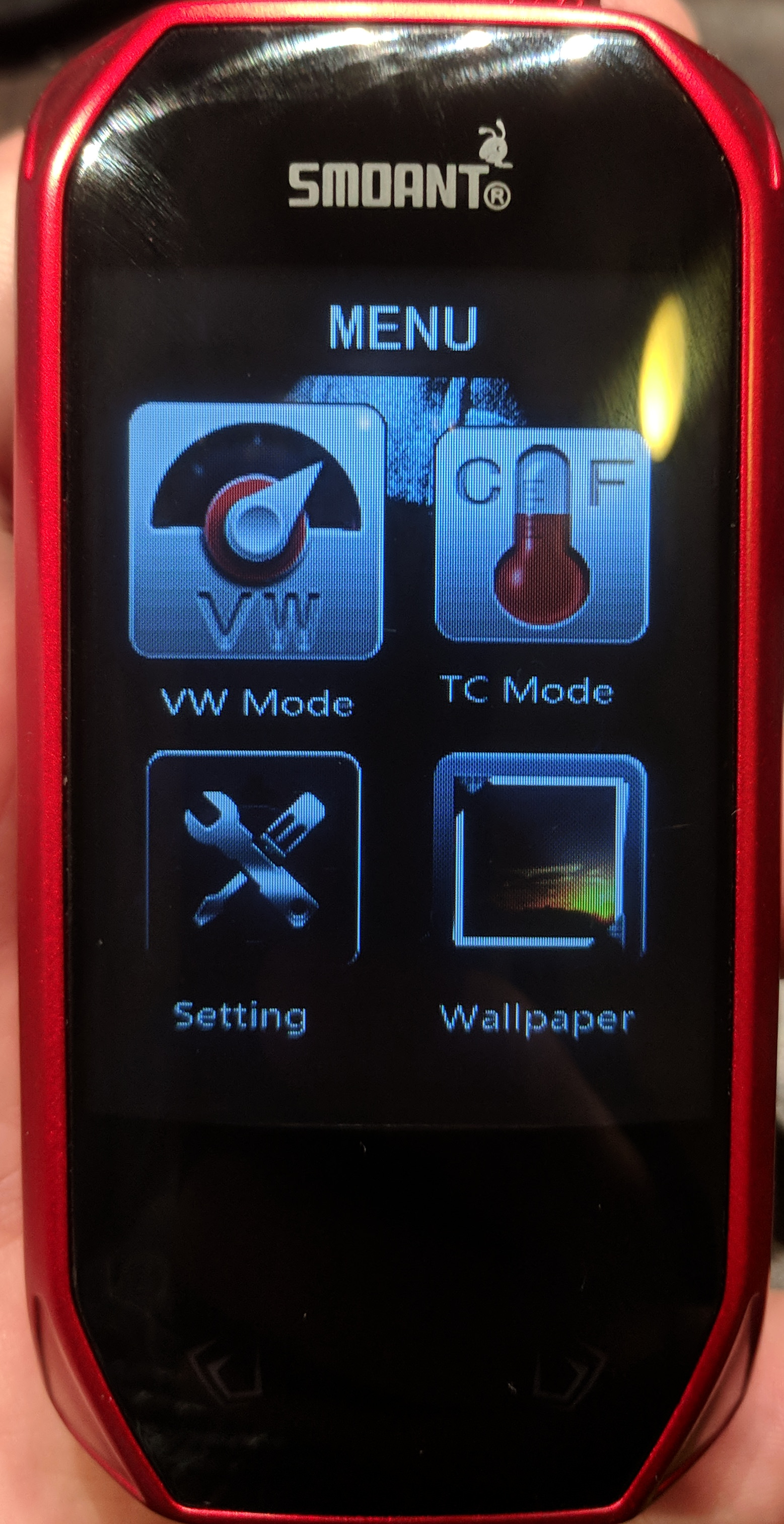 By default the mod will start up with the dial interface.

It tried to look fancy, but in all honesty I prefer the classic interface which just displays the information in a more human-readable format.

The classic interface also has a background image, which can be changed from the settings, and if anyone wants to fiddle with the software, additional backgrounds can be uploaded, but they have to be manipulated into bitmap format, and picture size of 240x240 pixels (anyone remember color phones from 2001?). 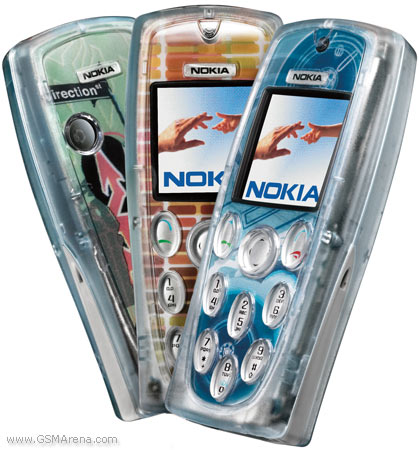 The third display option is something I really don’t understand.

It’s called the music mode, and I guess that the mod has a built in microphone. The built-in VU meter will start jumping and dancing based on the ambient noise (or music). Does it look nice? I guess it does look nice to younger people. Do we really need something like this in a vape mod? Definitely not. In my opinion this is a complete waste of battery and resources.

There is also a clock screensaver that looks rather funky (took me a while to realize it’s an analogue clock to begin with), and it quickly goes away.

Timeout for display can be configured from the menu as well, but I prefer to keep it short, and not waste any of my battery life on bling that I really don’t need. Important to note, if the batteries are taken out for a longer period of time (let’s say overnight) the internal clock will reset. In all honesty, I would rather have a small battery for the clock inside instead of the useless VU meter microphone.

Performance wise, the mod is very decent. In wattage mode it does exactly what it’s supposed to do. It fires very quickly, and delivers power to the coil as expected. What surprised me is that it also performs quite decent in TC mode. I tried it with my trusty ‘ole Footoon Aqua reboot, with a 0.1 ohm stainless steel staggered coil, and once I managed to set up the wattage it gave me a very consistent vape.

Setting it up is a whole different story tho. By default, the mod will set itself to 60W in TC mode, and to change that, I had to press the power and plus buttons together for about three seconds. This allowed me to adjust the preheat wattage. The interface has additional weird features like this one, but they are all covered in the user manual (recommended reading)

Rating the mod on the 1 to 10 scale would be as following:

Let’s look at the specs.

I have to say that this is a very solid kit for beginners. The tank has a lot of flavor, and the mod performs fairly well. I don’t like the fact the mod is a fingerprint magnet, and that the front screen will probably get scratched a lot down the road.

Would I replace it if it got stolen or broken? I guess I would replace the mod. It’s a solid performer and I can easily see myself using it daily and taking it everywhere with me. The tank I wouldn’t replace just because I’m not really into subohm tanks.

Would I recommend this kit? Yes and no. Yes I would recommend it to people who want to get into DL vaping with a decent kit, and no, I wouldn’t recommend it to more experienced vapers who would probably be disappointed.

Thank you all for reading

If you want to get this kit, check it out on @Heaven_Gifts
https://www.heavengifts.com/product/Smoant-Naboo-Kit.html

Need to see if people actually read this stuff

Nice review … Does anyone know if smoant has changed something since they made the Battlestar , Charon 218 TC , and their Cylon ??? it seems from some opinions their quality is going down . The three i mentioned imo are great mods .

Very good review! Enjoyed the read, and the pics are well done. Thank you for doing this!

Very good review! Enjoyed the read, and the pics are well done. Thank you for doing this!

Thanks man. Coming from you it means a lot

Nicely done, and I always appreciate the cons more than the pros.

Thanks for the review. That drip tip looks like it’s been taken from the Advken Manta

A bit disappointing that coil, if vaped at recommended setting, you should get at least a week or 2 from a mesh coil or something isn’t right…

Was a nice read but I don’t think such a flashy mod or wonky coils are anything for me… I’ll pass. 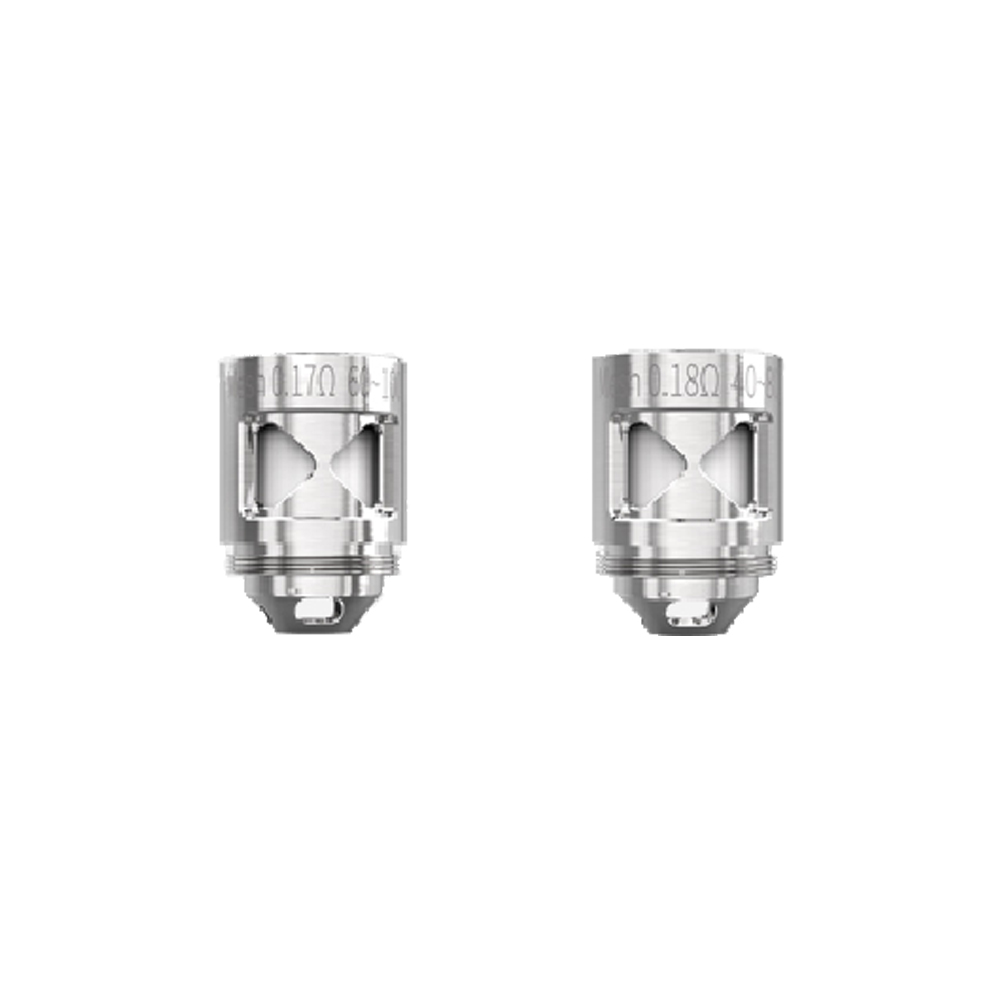 Smoant Naboo Replacement Mesh Coil is made of 100% Japanese Organic Cotton which can provide rich flavor and purer taste. Two types of coil heads for optional: 0.17ohm and 0.18ohm. You can enjoy different vaping demands.

You probably want to stick to TFV12 coils if these only last 1-3 days though, and that means you can get an RBA section as well!

Guess I wasn’t looking hard enough. In any case I don’t really do sub-ohm tanks so it’s not an issue for me

Nicely done, and I always appreciate the cons more than the pros.

Thanks man. I try to be honest when doing a review. It’s not like anyone is paying me to say it’s great and amazing