A question of battery life

I recommend the IPV4s. Two 25r batteries for 5000mah. TC that works and Ti wire support.

I’m still ‘on the fence’ about TC anyhow.

You may be on the fence at this time but I know you will change your mind real quick if you get a decent TC mod and build with Ti. The difference between the taste of Kanthal and Ti wire is enough of a reason alone…

I feel your pain. I’m still trying to find the perfect TC, single battery, decent battery life mod. I get a whole day out of a 25R with mine (50w mod), but I typically don’t run over 20w. I have a D2 intellicharger and four of these but they are supposedly being phased out for these. I charge two batteries every other day and carry one with me. Typically running a 0.5ish single coil in a Subtank or on a Magma or PV 1.5.

Yeah,… I’,m sure ur right ‘bout that… which I guess is why I’m looking at mods that have TC, & 1 of those that I mentioned (the Evic VTC) supports Ti …but I’m still on the fence & I’ll try to explain why…
I cant say that wouldnt be an advantage …Ti support I mean. I’d certainly prefer to be using Ti over Kanthal or nickel, from both a flavor AND safety point of view …but what id grab in a flash is a mod with SS wire support & I dont believe thats an option yet …is it??. That’d be dancin’!!
I’ll say the (apparent) lack of SS support is why I’m still on the fence about TC.
And why am I so hung-up about SS? Well, the first I heard of SS or Ti was in the thread I started “What is the benifit of higher wattage” when @Pro_Vapes said to @Professor_Snape… "Kanthal is the lowest ranking wire for vaping. You can get much, much better flavor with SS or Ti…"
For some reason,the prospect of using SS just struck an immediate cord with me! I cant say why it did more so than Ti - illogical… just felt it in me bones - SS for me!
I confess I’ve gotta do more diggin on this, but from the little I’ve read so far (& I’ve just discovered I forgot to friggin well book-mark it, didnt I!!? Duhh!..o/wise I’d be sharin the link…i’maneeediot!) it seems the safest long-term option. I’ll see if I can find it.
Well, holy crap! that was a deft leap from batteries to wire, wernt it??
So, back on track…

Have not tried it in TC mode yet.

But is that a possibility??? with SS i mean …& how long do you get between battery changes?

I’m using a single Sony 18650 battery in the Sig. 75. I think if I used it exclusively, I would be changing the battery daily. I would have to do a little digging, but it seems that I read a post on this forum, that somebody used a SS coil in TC mode and it worked.

I’ll start by saying this as I have in other threads. The Samsung 25R is by far the most vaped battery on the market right now. It has a super high pulse rating for mech mod users building super sub-ohm, it also has good life. Well there are some new batteries that have came out in the recent year. I’m mainly speaking of the LG HG2 battery. It is rated at 3000mAh and has a 20A continuous rating with a pulse of 50A < 3 seconds.

I have the new XTAR VC4 charger which shows you in real time how much mAh it charges from the time you put the battery on the charger. I did a little test here to see how much mAh it would actually charge if I discharged a battery to 3.0V. I did this test with a LG HG2 and a Samsung 25R (these are the only 2 batteries I use anymore). The LG battery charged up 2850mAh whereas the Samsung 25R battery only charged up to 2400.

So to conclude my argument here, IF you need a super high pulse for low sub ohm builds, then the 25R’s are the way to go. If you want battery life for a good single 18650 regulated mod, then I would buy some LG HG2’s. From my own usage I have found that the LG HG2’s last about 2 hours longer for me when vaping them in my single 18650 mod.

Now the life of the 18650 will change depending on what mod you put it in. Example: I have a Sigelei 75W and a IPV D2. The battery life with an HG2 in the IPV D2 is by far the best I have come across for a regulated single 18650 box mod. I maybe use 2 HG2 batteries of all day vaping around 500℉ and 40-50W. Now the other side of the spectrum, the Sigelei 75W has by far the WORST battery life for any regulated 18650 box mod, no matter what battery I use! I go through almost 4 batteries on the Sigelei 75W in comparison to the same vape time on my IPV D2 with 2 batteries.

The battery life with an HG2 in the IPV D2 is by far the best I have come across for a regulated single 18650 box mod. I maybe use 2 HG2 batteries of all day vaping around 500℉.

I cant say I’d be vaping all day at 500℉ - not all my vaping will be sub ohm as I enjoy (for now) my Nautilus Mini’s, so an HG2 (+ a couple of spares) in the IPV D2 is a real possibility for me.
@ryan8five0, thanks for this info & sorry I missed your previous threads. Cheers!

[quote=“Professor_Snape, post:15, topic:27960”]
I would have to do a little digging, but it seems that I read a post on this forum, that somebody used a SS coil in TC mode and it worked.
[/quote]That would be brilliant …& GREATLY appreciated. My fingers are X’ed!

I understand. As for me, I came from RDA’s and mechanical mods so I like a nice dense, full vape. That’s what makes vaping so nice for me. Everyone can vape, but not every single person will vape the same as the person next to them. It’s all based on what you prefer.

I actually my IPV D2 from wakeandvape based out of California. I’ve ordered a lot from them and they always have some super slick deals going on, like this one.

You get all this for $55 plus $6.50 priortiy shipping (based on location, this is from California to Florida).

but what id grab in a flash is a mod with SS wire support & I dont believe thats an option yet …is it??. That’d be dancin’!!

Well the latest version of the X Cube 2's firmware supports stainless steel temp control. Haven't tried it yet. I think I'm gonna let someone else try first. http://www.smoktech.com/hotnews/products/x-cube-two-firmware-upgrade-guide Sorry if this has been posted already.

Well, I can confirm this…
I used SS in TC…and I did it on accident, lol…
Problem is, I cant remember which mod I did it on…
Tell ya what, lemme finish what I’m doing and ill figure out…I should have time before the SO gets home…if not, ill do it first chance I get…

Hmmm… might be a bit more than that to Australia.

Yes, I thought I’d seen that somewhere… I thought there was a box that supported SS… but I found myself technologically daunted by this one - & its huge. Not very fussy, am I?

technologically daunted by this one

I agree… It took me days to figure out this mod. Hopefully with updates they will simplify this mod.

Here’s the perfect mod specially made for Cocohontas… 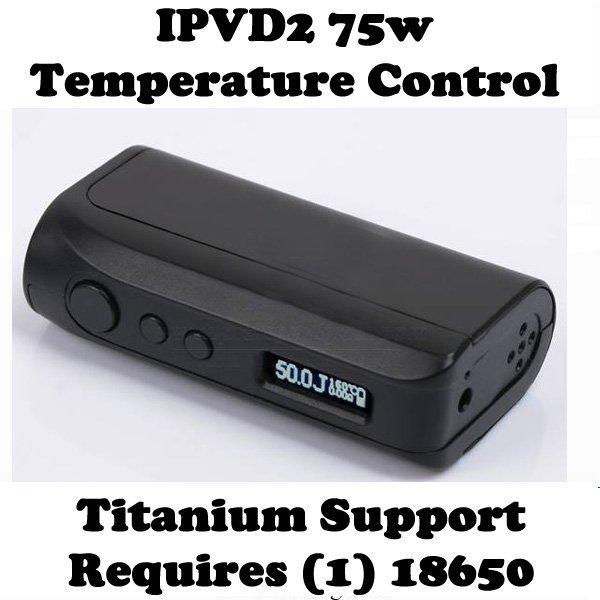 This one would do you nicely @JoJo

Yup. That’s the one I’ve had my eye on since I heard about it. I figure p4y did something right with the ipv4 so hopefully they did it with this one, too. Kinda been waiting to hear some feedback on it before I commit, though.

That IPVD2 is the one I was going to order after Christmas, but now I’m getting a Siegelli 150w from a really nice man ( @ProVapes ), so I’m going to stick with that.

I did a bunch of research on the IPVD2 and it does look like a great mod, JoJo.

With the wattage at 50 … I would go with a dual 18650 mod. With a single 18650 would look for something that would satisfy at a lower wattage. As for rda I have the magma and velocity. The main issue there is air flow. Magma has a much more restrictive air flow.