A Ray Of Sunshine for changed PMTA date

As most of you are aware, on August 8th, 2019, SFATA and a coalition of vapor businesses and state associations announced our intent to file a Motion to Intervene on the American Academy of Pediatrics et al (NGO) vs FDA lawsuit in the Maryland court case that resulted in the Pre-Market Tobacco Application (PMTA) deadline change to May 12, 2020. Just yesterday, we received the VERY good news that our Motion to Intervene was granted .

It’s not clear that the litigants hope to accomplish more than a temporal delaying of the time of instigation of the FDA’s regulatory activity already set forth ? If so, I wonder what persons/parties will have a meaningful financial interest in (due to a tangible benefit from) funding litigation for (only) the purposes of effectuating some amount of time delay (if that is in fact the case) ? (One would think, only) companies already invested in related/affected businesses that hope to (within the interim, however limited) manufacture, distribute, and profit from the sales of their relevant wares. Sounds like a rather dicey “business environment”, indeed.

I will attempt to reply but am not clear as to the questions or positions posed. I do feel that allowing intervention is a very good thing but can also see it backfiring. The court had rejected this on procedural rules (as untimely) which I think opened the door for appeals and actions of parties as “strangers to the record” which thereby can not be affected without having their “day in court.”

It is very hard to prevail in a lawsuit against the government. It is very easy to lose when a joint party undermines his business competitors. See below (Juul)

Yes, and I believe rightly so. FDA held out PMTA requirements without any guidance or finalized rulemaking of what needs to be submitted and then “moved the goalposts” making it impossible for manufacturers to obtain lab testing in the time now specified… However, the court allowed case by case extensions and waivers at the discretion of FDA. Among the ecig corporate lawyers, there are widespread positions that a regulatory program could have been put in place to “weed out the bad actors.”

If so, I wonder what persons/parties will have a meaningful financial interest in …funding litigation for… the purposes of effectuating some amount of time delay?

Now I think we are getting to the root when we include the remainder of your questions/positions? about “business environment.” These are of course corporations whose only interest is in their profits and oddly enough want all of us to “advocate” for them. Most of them, I will.

Juul/Altria was a member of VTA when the action was filed but have disassociated themselves and have announced that they will comply and eliminate all flavors except menthol and mint. I’m pretty sure most if not all here have received “Marlboro” style postal mailings recently from Juul which blatantly change their marketing strategy to adult vapers. 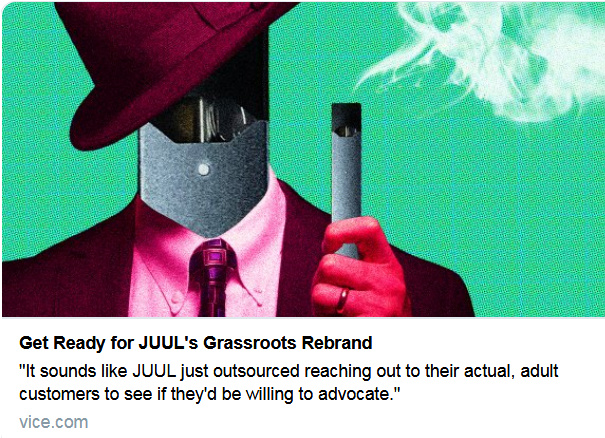 Regulation is coming folks. Parties on both sides of this crap, government and industry, (not all) are opposed to DIYing and complaining how we will be making juice in our bathrooms. So joinder is necessary as a matter of right, but they need to keep Big Tobacco out of it. And we need somehow to not become their sacrificial lambs.

The suit can be read here: https://clivebates.com/documents/VTAvFDA2019.pdf IMO it is very worthwhile to read but probably more reading than many want to do. However to the issue of why Joinder is very important here are excerpts from the reliefs requested:

FDA Engaged in Unlawful “Regulation by Litigation” By Superfluously Suggesting a Grossly Accelerated Ten-Month Deadline for the Submission of PMTAs Without Any Advance Notice or Opportunity for Comment by VTA or Industry Stakeholders.

Paragraph 125. As a federal agency, FDA is subject to the requirements of the Administrative Procedure Act, including the notice and comment requirements imposed by 5 U.S.C. § 553.