You need to add another 6mg/ml of nicotine, so this is what I would do. You’ll end up with about 32ml when you’re done. you’ll have to plug in your own info on the calculator for what kind (vg or pg) of nic you have though. 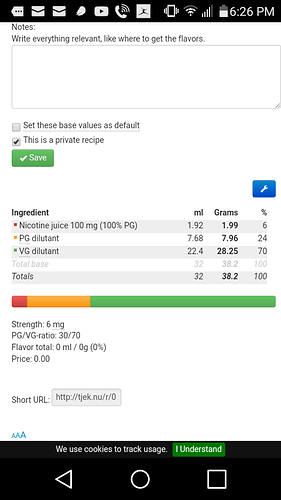 How do you get to that calculator? Is it the make a recipe? Also after I add the nic I don’t have to wait right? Just shake it up as much as I can.

Think I’m good…sorry im slow. I thought if I used that make a recipe link it would post as a recipe. I was looking all over for the calculator and idk why but took me a while to figure out the math with my e juice. I think I just add 1.8ml of nic shake n vape. Sorry if I sound stupit lol I’m just nervous this is my first time doing anything other than dripping it in. Could some one check my math for me PLEASE
I have 30ml of e juice thats 6mg nic and i want 12mg i have 100mg nic VG.

Yep just scroll up to the top of this page and hit " create a recipe". And yes, you’re good to go once you add the nic, just make sure to shake the hell out of it first.

So I shook the nic really good, added 1.8ml of 100mg nic to my 30ml 6mg juice, shook that really good too but now its burning my tounge a lil bit. Iv had 12mg nic plenty of times and never had that problem. Does anyone have an idea of what that could be about? I even added some more 6mg juice in my tank too about 3 droppers full thinking maybe it was too strong but still has a weird feel in my mouth.

Have you used that batch of nicotine before this?

No never this is my first time buying nic. That’s the only thing that makes sense to me though is maybe its the batch. I had to dump my tank and it still irratated me until about a 1/2 new tank thru and I have a 6ml tank.

I’d mix up a small 6mg batch with your mfs nic and no flavors. Again shake it up like crazy (the nic before mixing and the batch after mixing) and see if you get the same thing. If so you probably got a bad batch and should contact mfs customer service to get a replacement bottle.

Also, I totally recommend NR, I’ve never had a bad batch of nicselect from them.

OK I’ll try a little and see how it goes. Tysm for the help I appreciate it.