Guys, Gals, I became interested a couple weeks ago in the possible use of saline to take a bit of the dryness from Ejuice. I knew little about it’s use so first I searched here on ELR for the mention of Saline use. First thing I came across was a mention by @Ken_O_Where the Saline can clog coils. I thought, well, not good but possibly something I can put up with for personal use. Then after doing a little more research on Google, I ran into this… 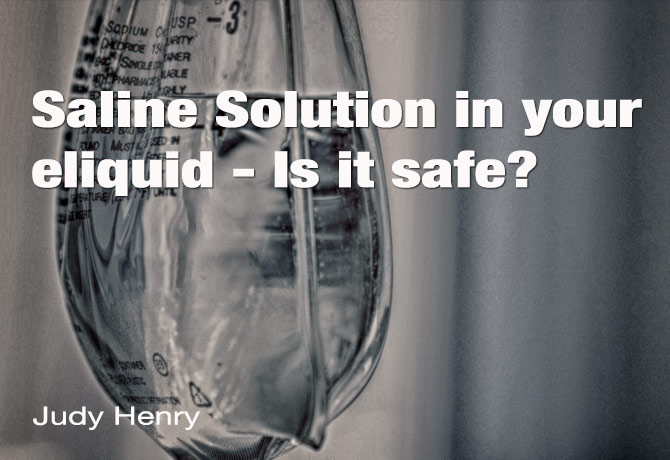 Saline in eLiquid – Is This Smart?

SALINE IN ELIQUID - SAFE? It has come to my attention that some companies are looking at adding saline solution to the e-juices to help hold in the flavors bet

Quote from this article…“Salts consist of sodium and chloride that together are simply common table salt. When sodium chloride undergoes heat vaporization, it produces pure chlorine gas. This is definitely NOT something that any of us should be inhaling”…UnQuote

Well, there’s another idea shot to hell. Don’t feel like I want to take the chance with this one. Sounds entirely too logical. Anyway, this is just one of the additives we DIY blenders are considering in our Ejuices and I feel we need a thread that deals with specifically additives. Their purpose, their use, their safety. Please join in with your opinions and experiences with Additives…

I have read that article too. I posted about it on another thread about normal saline =NS abbreviated in the nursing world.

While it seems perfect the heat just blows that idea to hell in back. Sucks to because it would of seemed so perfect d/t it’s concentration for alkalinity vs acidity it’s a perfect medium. More like a perfect storm about to happen. So I quickly decided eh not for me.

I think this is some whack chemistry going on. I’m pretty sure it’d take a LOT of heat, way more than we generate by vaping, to turn salt into sodium and chlorine. The melting temperature of salt is 1474º F and the boiling temperature is something like 2575º F. Basically, unless I’m misunderstanding, what’s going to happen is the water in the saline is going to vaporize and the actual salt is gonna be left behind. So, I think it’d be perfectly safe to put saline in your juice, I just don’t think it’ll do any more good than distilled water. People put salt in “warm air” humidifiers all the time to help with conductivity.

Did a little more poking around on Google and noticed supposed chemist disagreed with the Chlorine Gas exposure from vaporizing saline. I then looked to see if there are comments on this same page and here’s what was said…

I’m pretty sure it’d take a LOT of heat, way more than we generate by vaping, to turn salt into sodium and chlorine.

Yes, this is just what I noticed as well, looks like you beat me to posting. Being the salt is left behind it does make it sound very likely that this could gunk up coils. Wonder how badly…

Keep in mind, if using saline, that some wires are more susceptible to rusting. Even some of the SS wires will rust in the presence of salts. I havent experimented with additives much, other than menthol or koolada, i havent found the need. I have used saline and citric acid, both lead to coil gunking. I am lazy so anything that leads me to to rewick more than i do is out, hehe.

I feel personally like I’d never get to those temperatures d/t how I vape but I also think why take a risk that’s unnecessary. NS will most likely mute just like distilled water does and the coil gunking is just more of a reason I say nah.

The more I read in this topic it was a flip flop of disproved theories so I said sounds like the " they’s" don’t even know how the heck should I.

Salt is mostly sodium chloride, the ionic compound with the formula NaCl, representing equal proportions of sodium and chlorine. Sea salt and freshly mined salt (much of which is sea salt from prehistoric seas) also contain small amounts of trace elements (which in these small amounts are generally good for plant and animal health). Mined salt is often refined in the production of table salt; it is dissolved in water, purified via precipitation of other minerals out of solution, and re-evaporated. During this same refining process it is often also iodized. Salt crystals are translucent and cubic in shape; they normally appear white but impurities may give them a blue or purple tinge. The molar mass of salt is 58.443 g/mol, its melting point is 801 °C (1,474 °F) and its boiling point 1,465 °C (2,669 °F). Its density is 2.17 grams per cubic centimetre and it is readily soluble in water. When dissolved in water it separates into Na+ and Cl− ions and the solubility is 359 grams per litre. From cold solutions, salt crystallises as the dihydrate NaCl·2H2O. Solutions of sodium chloride have very different properties from those of pure water; the freezing point is −21.12 °C (−6.02 °F) for 23.31 wt% of salt, and the boiling point of saturated salt solution is around 108.7 °C (227.7 °F).

Notice this above sentence…“When dissolved in water it separates into Na+ and Cl− ions and the solubility is 359 grams per litre.” Also this sentence…“and the boiling point of saturated salt solution is around 108.7 °C (227.7 °F).” This basically says Saline Solution being a mix with Purified Water would separate the Na+ and Cl- ions. This also says the boiling point is 227.7 degrees F for a saturated salt solution. Is a saturated salt solution the same as Saline Solution? Now what are we suppose to think? Flip Flop, sure starting to sound that way with Saline. Think I may still pass on it but I would very much like to find a additive to actually makes the vape more moist…

Has anyone used Vinegar in their blends? White (clear) Vinegar is said to make light fruits pop when a couple drops are added to the mix. They say use Apple Cider Vinegar for darker fruits for that same pop. I’m sure you all have heard of adding a touch of lemon or lime for this purpose but this was the first time I heard of using Vinegar. Anyone heard of this…

I think this is some whack chemistry going on. I’m pretty sure it’d take a LOT of heat, way more than we generate by vaping, to turn salt into sodium and chlorine

I think the concern is more with electrolysis (this is how Chlorine gas is commercially produced) than heat. Even so, there’s a lot more readily available bonds to break in glycerine than in widely dispersed Chloride ions. I’d take that Spinfuel article with a grain of salt.

I was using saline for a few weeks till I changes a coil and seen a large amount of black crud. Never noticed any diff in taste and I started to get rid of dryness as well. Switched to distiller water after. On bare coils in dripped a harshness developed. Think it was from salt build up. Open source vapor used to use saline according to their web site now they just use distilled water, does not say why the change. No one I gave juice to with saline made any comments at all

Thank you @john70 for reminding me where I had read about saline.Here is all that is posted there.
http://www.opensourcevapor.com/blogs/articles/14177397-we-put-this-life-sustaining-element-in-our-flavors

I also found this at Open Source Vapor, a recipe that called for Organic White Vinegar @.96%.

The stevia I just purchased yesterday has organic apple cider vinegar, citric acid, organic stevia leaf extract and it works amazing. I added 2 drops to 10 ml of my blueberry custard and it gave it that sweetness and pop I was looking for.

The stevia I just purchased yesterday has organic apple cider vinegar, citric acid, organic stevia leaf extract and it works amazing. I added 2 drops to 10 ml of my blueberry custard and it gave it that sweetness and pop I was looking for.

Interesting, contains Apple Cider Vinegar. I looked at a couple of threads about the use of vinegar and like I said above is supposed to make fruits really pop but one other thing that was said which I did not mention was it was also said that Vinegar helped keep your coils clean. Perhaps Stevia will not effect coils in a bad way thanks to the addition of vinegar in the mix…

Sounds like the ingredient list on Pyure liquid stevia drops. Is it, or have you found another brand of stevia with built-in flavor enhancers?

I’ll weigh in here and say that i have had great sucess here with saline solution in my base vg mix.
I only use the Wound Wash .09% saline and distilled water USP solution found in the Pharmacy and mix that to 5% of my total base vg solution, so to recap 5% saline USP to 95% vg USP. That makes the pure vg easier to mix as well and helps the relieve the dryness of eliquid.

Yes that’s the ones, they seem to work pretty good