Advice needed on much desired recipe!

Hey brothers and sisters, I’ll start by saying I’m not being at all lazy, I have been trying to make something and I’m not even getting REMOTELY close, I’ve been buying (forgive me!) A liquid I discovered at the vaper expo called Butterscotch popcorn by Mohawk&Co , I mean I need this in my life, it tastes EXACTLY like butterkist popcorn, it’s a strong flavour and the mouthfeel is like nothing I’ve tried before, I can’t keep buying it it goes against every reason I started DIY, plus there’s only one supplier in the UK…so, any ideas?? I’ve tried all the butterscotch I have, all the toffees, all the popcorn…and like I said I’m not even in the same ballpark, any and all advice welcome! @Beaufort_Batches this would be right up your street …

Who’s the uk supplier dude? If it’s not extortionate I don’t mind grabbing some and seeing what flavours I get from it? I’m way too new at mixing to assist in any other way

Have you checked out the Butterscotch / Butter Rum thread?

After searching all the recipes on this site and others, I have not seen a tried and true all butterscotch Vape. I've tried mixing FA, TFA and FW butterscotch at anywhere from 3% to 15%. After tasting them daily for a full month none of them taste like a full bodied butterscotch. 28 Days Vape's "Dreamer" is amazing. It tastes like butterscotch, and nothing else. I would love to know how they do it. wink Anyone have a recipe for a butterscotch that tastes like... Butterscotch? I'm not intereste…

His name is Paskash and his number is 07450 024984, I was given the number from Mohawk&Co in Malaysia, he owns a wholesale vape business but he let me pay with PayPal and he posted 60ml out to me for £22!..which I’ll be doing again very soon lol

I’ll do that next time I order, probably be midweek, cheers lolly

You read my mind lol @BoyHowdy

@Pugs1970 That Butterscotch thread revealed that Butter Rum LA was a pinnacle flavor to achieve the buttery-ness of the butterscotch. I am curious if this juice is needing it as well such a strong and bold flavor. Also butter cream Caps has a tiny hue that reminds me of butter rum reminds but not the same at all.

ha…yeah I read up on the thread @BoyHowdy put up, thing is…I haaaate rum, can’t stand it, and if there is even a hint of it there, which I’m guessing there is, I’ll gag, straight up gag, I can’t even describe what this liquid is other than…If you have ever eaten a bag of Butterkist pop corn, and you find one that is super covered, it’s JUST like that, the mouth feel is a real warm buttery toffee, I’m actually banned from vaping it in the bedroom as my Gf can’t stand the smell haha, but man i can’t get enough of it lol Not neccsasrily like the drink Rum. I have not had butterkist pop corn you may never of had a lifesaver for all I know lol

I have had life savers but I don’t think they were butter rum, it was 13 years the last time I was in the states, you don’t get em over here tho, I mean it can’t hurt try butter rum eh, whatever it is it’s definitely not something I’ve tried yet

Boom…BB if anyone could shed some light on it I’m pretty sure it would be you man, see what you think

.I haaaate rum, can’t stand it, and if there is even a hint of it there, which I’m guessing there is, I’ll gag

I hate to recommend anything that will cause you pain!

I do think you will be pleasantly surprised though if you give it a shot.

That Butterscotch thread revealed that Butter Rum LA was a pinnacle flavor to achieve the buttery-ness of the butterscotch. I am curious if this juice is needing it as well such a strong and bold flavor. Also butter cream Caps has a tiny hue that reminds me of butter rum reminds but not the same at all.

That is the lesson that I learned from that thread as well @Amy2 , Butter Rum is what makes a great Butterscotch and I also like what Caps Butter Cream can bring into a mix.

They are soo good ! I try never ever to buy them or I eat the whole roll so good mmh

Iv’e had rum toffee before, and it doesn’t taste like that… @Lolly have you ever eaten Butterkist popcorn?

Yes kinda close your in the ballpark but the butter part is OOTW delicious !

you know oddly enough, I have just checked out all the recipes I could see for actual Butterkist popcorn and there is no butterscotch anything in any of them haha …aaaargh

Many, many times! Have you added a touch of saline…that’s what I’m getting along with the toffee-ness as I’m thinking about it? 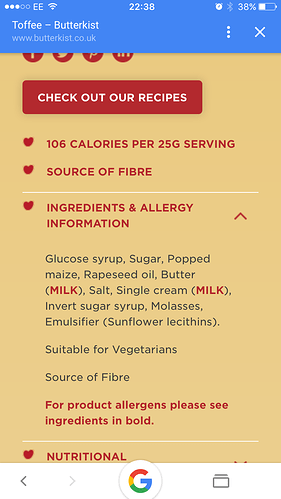