All my recepies don't taste the same

After a little help here

I’ve GT some recepies I have come to love but recently none of them are tasting right.I store me nic in the fridge.in a plastic squeeze bottle.my vg and pg are in the same bottles but left on the side where I mix with my concentrates.my concentrates are all in nail polish racks.I’m worried the concentrates are all ruined.its not just my taste buds as my Mrs has noticed the same thing .there is almost a bitterness to the juices.some help would be greatly appreciated

Do you store your concentrates in direct light or anything? How old are your flavorings? Maybe do a test with only your nicotine/vg/pg to make sure it isn’t any of those first?
I have some flavoring that are really old buy yet still taste like they did the day I bought them? If its more then just 1 flavoring and its all of them it sounds like a possible storage issue? Trial and error, one by one, may be your best friend right now…

IMO, the flavor concentrates don’t really go bad. I’ve had some for over a year now that I bought clearance (ie kinda old when I got them) that I still use on a regular basis and they’re fine. I keep mine in a plastic drawer thing on top of my dresser (not really any direct light but not totally dark either). I’d tend to say it is the nicotine. What nicotine are you using? Is it possible it’s absorbed something from your fridge? If you’re going to store it in the fridge, I’d suggest doing it in an airtight container or in a couple of zipper freezer bags.

Have you always stored your nic in freezer? I have heard some cases the flavoring going off due to freezer as well

@JoJo beat me to it there

some help would be greatly appreciated

The flavourings are not in direct sunlight but not out of the light .they all seem to smell fine still.maybe its the nic I will try a nic free tomorrow.the flavourings are bout 2-3 months old.everything seemed to start tasting weird around the same time

That’s a good possibility as well. You might check the batteries or calibrate with some nickels. A nickel should weigh 5 grams.

I have just mixed up 5ml of nic free it has helped but still something off .i wonder if these sqeezy bottles I have are not good quality.a pound coin weighs 9.5 g and on the scales its coming in at 9.59 so a little out 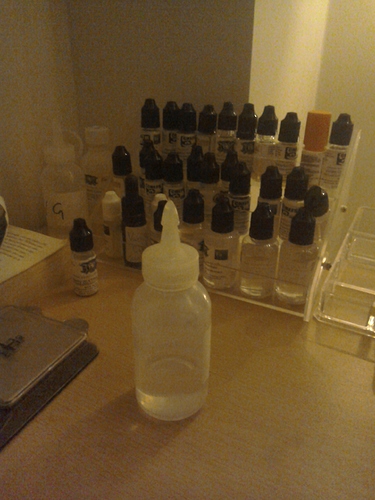 @juicyd Like ringling asked, do you shake the flavor concentrates before using them? The longer they sit the more the ingredients in the concentrates will separate. It’s very important to give them a good long shake before adding them to the recipe. Same goes for the nicotine.

Didn’t even think about the fact that you wouldn’t have a nickel cuz you aren’t in the US. Good ol’ ethnocentrism. LoL. Could be the bottles. Maybe try your flavorings in something like whipped cream or just use new bottles, Nic, and PG/VG.

A nickel should weigh 5 grams

I just tried this method since I had never heard about it (I luckily have little weights to cali) but out of the 4 nickels I just tried they were all different +/- .05 grams?

Yes I always shake the bottles before I make a recepie.thanks for all the input guys with your help I will get to the bottom of this

I have switched from using HDPE plastic bottles to glass for all of my mixes and Nicotine base.
I now use Pirate Vapes Nicotine (UK) that is supplied in brown glass bottles and store in the fridge for use and the freezer for longer term. This nicotine is also less peppery than most.
HDPE also seems to taint the flavour of mixed juices, this seems to be dependant on time.
It is probably not coincidence that the major premium juice suppliers all use glass.
The discernible effect of tainted liquid is very much dependent on the flavour.
A delicate Crème Anglaise custard will be very susceptible taints due to both quality of ingredients and storage.
An Aniseed, Blackcurrant and Menthol liquid could probably be stored in a hot water bottle in the garden.

I’m guessing that would be due to wear and tear on the nickels.

Oh for sure, I just didn’t know if you use this as a rock solid method is all…even on the new looking coins I had discrepancies

even on the new looking coins I had discrepancies

That’s because our nickels are made in china now…lol

I was wondering why they chinged and not clanged when I dropped them!

The next batch we get will be filled with lead tainted chocolate.