So this may be a bit of a gross thing for some but has anyone ever had an allergy to Flavorah Rich Cinnamon in the form of tiny ulcers on the tongue? I used to have these ulcers very rarely and since I started vaping a liquid that uses Rich Cinnamon I’ve had this problem. I did Google allergies to Cinnamon and found that it can manifest in these small ulcers. Just interested to find out if its a common thing or as I’ve never been allergic to anything in my life before. Thanks

I’ve never heard of that but would recommend that you stop using that flavor. You could be a 1 in a million that this does it to you. Doubtful, but it’s better to be safe.

On the other other hand it could be something else. Like burns from spit back. Or a non vape relegated all together. But you know your own body better than anyone else.

If you suspect an allergy, cut out the suspected culprit immediately and monitor the symptoms. If it’s an actual allergy, it should quickly disappear. When everything is better, you may want a confirmation to see if it really is the cinnamon by reintroducing it in your vape juice and see if it returns.

I’ve read about these ulcers before, vape related, but haven’t seen any definite confirmation. It’s always possible. Because there’s no long time testing reports on each and every e-liquid component, people often jump to conclusions but as Chris said, it could very well be from something else too. Only way to be sure is to test (if you’re willing to).

I have wasabi issues in rl and recently had to vape some juices with wasabi as a judge. While my reactions were mild I did have to resort to taking allergy pills while testing.

Cinnamonininum is a chemical module often found in the posterior of concentrate, I’ve found Cinnamonininum to be a mild irritant to the throat and nose modules of the internal organs, if you have sensitivities to Cinnamonininum you should discontinue usage

How much have you used in any given recipe? ~Curious

elr’s calculator is a bit wonky with flv’s flavors… I am the first to admit it… and I do try to fill in all the “blanks” correct as I can.

Not sure if you used the elr calculator for this or??
but here it is for standard “35” drops 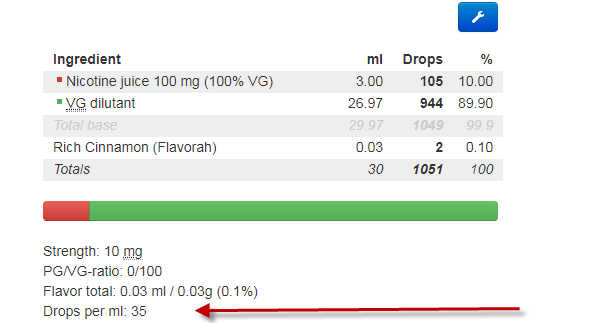 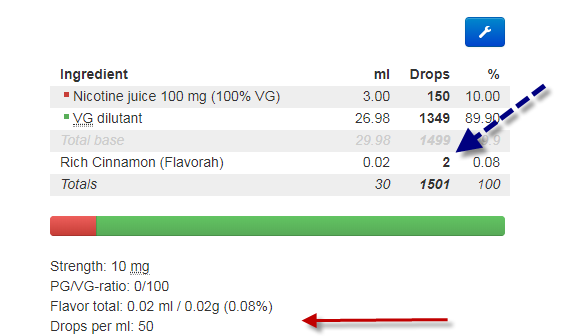 However… it could be the cinnamon… could be…

But let me ask you this… have you changed your nic levels at all? have you been licking your drip tip? prolong exposure to things like cinnamon and drip tip licking could cause your “blisters/ulcers”… then again, it could be your taste buds changing, it could be many things.

I always tell folks that think it might be a new allergy, go get tested. When in doubt, get it checked out. That way you have secure info from a professional.

I hope this helps, Lauzzy… I know you aren’t too happy right now… but best for now… lay off that juice, find something mild to help your mouth to recover and heal until you know for sure what the issue is.

wrong math… its late… but it should be .06% for 1 drop… so you might want to correct your recipe if it is public… 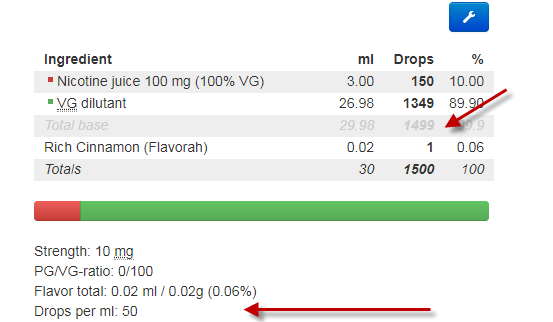 Thanks @anon84779643 for all that info, I’ve had to read it a few times to let it sink in LOL
I haven’t changed anything when it comes to the nic levels. All my liquids are 18mg (MTL vaper only) I did try a different brand of 36mg VG but I don’t think it’s that.

I have had one of my RTA’s leaking juice at the top of the mouthpiece which sometimes happens but I usually clean it with tissue paper if I start to taste the juice.

I’ve stopped vaping the juice with the cinnamon now so we’ll see what happens.
Hopefully it’s not an allergy to the high nic levels… noooo

Not with the cinnamon but peanut butter.

I do have a citrus and nut allergy, not all of them but for the most part. Never had an issue with any of the concentrates (multiple brands), besides that I might not like the taste of them lol.

Anyways, a while back I got (FLV) peanut butter and after a couple of hits from the tester, I got a allergic reaction. Not Flavorah 's fault, but the reason I am bringing this up is, some concentrates can cause some reactions, especially if you are sensitive to certain profiles or actual even have a allergy to these kind of things (real food not vaping)

I always advice that in cases like this, you either are very careful or avoid them at all (if known allergy exist) or in your case you’re noticing changes all the sudden, to avoid them as well or test in lower percentage as well as dilution and see if it helps.

Try other brands and see if it might be cinnamon in general, vaping is different than eating it lol.

@eStorm Thanks so much for the reply

I was thinking that I would try a different cinnamon or for example I have other cinnamon based flavours that I could try like the cinnamon danish just to see if it is just a general reaction to cinnamon or to the Rich Cinnamon. It’s a real pity because it was such a delicious liquid and most often trying a different concentrate in a recipe never really works out and it doesn’t taste the same.
Since I’ve stopped vaping the liquid the ulcers have gone so I think it’s safe to say that concentrate doesn’t agree with me.

Does anyone think of blonde jokes about being allergic to concentrate?

Have developed loads of little mouth ulcers when vaping a ginger flavoured juice, years ago (can’t recall the brand) and have since learned not to eat ginger too often; it will have the exact same effect when I eat it , so i’m pretty certain it was the ginger, not some other ingredient.

Have also had the same reaction to clove oil (no, not vaping it, but usng it to treat toothache)
i haven;t dared to try vaping cinnamon, because most of those powderered spices have a nasty effect on my digestive system these days, so shouldn’t be surprised if they bring out the ulcers too,

I am awash with allergies and intolerances, and often horribly sensitive to tiny traces, You could call me the forum canary

care to finish the sentence?

OK, I’ll finish it for you, ya lazy git

I’ve been making that same observation for years, and finally, since a year or two back, the NHS is willing to prescribe me a PG-free inhaler. They do exist, it’s just that the cheapo ones are not PG-free. Same as juices, really.

It is crazy, but he is not a minority here…