Hi all,
Never used Alpine Strawberry before and I was curious as to the opinion of the more experienced here that AS doesn’t mix well with creams/custards etc?

Any advice on what to avoid with AS would be much appreciated given I don’t really want to waste any given its cost (I am a Scot and we traditionally don’t like wasting money, some may call us mean…we, on the other hand, just see it as being ‘careful’ :))

for all my alpine recipes… you can have a look

@Ed133 I’ve been using AS more than usual lately, and as @anon84779643 said, it’s VERY strong. As far as universal uses, I fear that because it presents as more of a white strawberry if that makes sense, it may not carry as well in some cream/custards. My opinion obviously, but to my tastes it doesn’t present as a juicy red strawberry. It does have it’s uses, but to my tastes, it would probably not be my custard/cream go to.

And we are all different… This recipe here:

and this recipe here

The way I used alpine is to give the “hint” of the sweetest (not the juiciest!) strawberry on the planet… the alpine., as a back taste. It is a full alpine strawberry… however the main flavors other than strawberry are the stars of the juices…

@anon84779643 I think the OP meant more of a heavier custard / cream with AS pulling it to the SB, not just using AS with some creams as mixers. With THAT said, I’ve adapted your 6 degrees, and due to my “issues” with Sugar Orchid, will omit that, and mix it up !!! 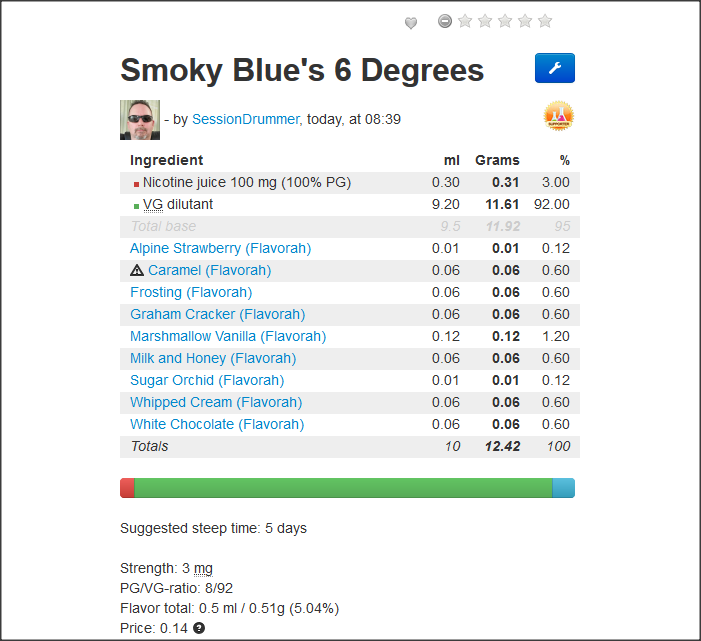 As one of my coworkers always says, “You don’t know, … what you DON’T know…”.

What issues with SO do you have??

I wish I had taken a pic of it. I was never TRULY enamored with the flavor, but still used it. It was in the (older) glass bottles with the squeeze bulb. When cleaning my racks, I noticed it became STUCK (literally) to the nail polish rack, and I almost broke it trying to get the bottle off. Once removed, I looked closer at the bottle, and it had somehow seeped out of the top ?? causing some kind of crystiline growth all down the bottle. I never used the flavor much, and the grass wasn’t cracked. I don’t know what is IN that flavor, but I never re-ordered after tossing that one. Never had a flavor do that before, especially in a glass bottle that was upright, seldom used, etc.

It was in the (older) glass bottles with the squeeze bulb. When cleaning my racks, I noticed it became STUCK (literally) to the nail polish rack, and I almost broke it trying to get the bottle off. Once removed, I looked closer at the bottle, and it had somehow seeped out of the top ?? causing some kind of crystiline growth all down the bottle. I never used the flavor much, and the grass wasn’t cracked.

What happened is that the cap to the bottle was not sealed correctly.
[not saying your fault!!!]
Causing the flavor crystals to escape, and dried to your rack. Therefore making it all sticky.
I can see that happening… However… those crystals could have been put back into the bottle and a good shake, dissolved again to turn the liquid back into flavor. It was a bad design, made with good intentions. I have had it happen to me many times and not just with the SO.

SO is a gum paste flavor!! It is used to make the frosted sugar roses on a cake. It goes hand in hand with frosting… it has a frosting taste, that when pushed too hard, can be a crumbly mix with almonds thru out it. It is an excellent sub for - meringue.

Flavors I have had that experience with:
Cream
Cool menthol [just last night, dead-end of the bottle and the cap was all crusted with flavor crystals]
Rich cinnamon [After a year and a half the flavor went bad, crystals went all over the place]

Things like that happen, especially with ultra flavors. Flv isnt the only company that has had this issue… BF had it pretty bad too…

I do not think I could live with out the SO… I use it in a lot of my juices.

I will never forget the time I had with Rich cinnamon… Once I had my shelves up, and I put all my flavors on… I must have dislodged the cap on RC… went shopping for the day and came home… and it had exploded all down my pine paneling walls. It took the stain off my paneling. I had to resort to using pecan meat to bring back the finished look to the wall… and to this day you can still see parts of the trail it left…

It happens. Not much you can do except replace the bottle. I love the flavors, so yeah… ooopsie!

If these flavors were bad for us, they wouldn’t be selling them

SO is a gum paste flavor!!

OK, let’s say, perhaps, for the moment, that gum paste might NOT be in my profile wheelhouse at the moment.

I’ve had about every style bottle that FLV ever used, including re-bottlers versions as well. Had about every problem you could ever have (and I bitched and whined about them here LOL), that crystalline growth, not only where the cap met the bottle, but down the entire length, under the bottle, and welding to my rack, DID, leave some cause for concern. Have never had a flavor do that, and I have a LOT of flavors.

I appreciate where you’re coming from @anon84779643. When remembering my past loathing for SOME of FLV bottle designs, and complaining about them, I was never more impressed to have FLV come here and discuss it.

It freaked me out, really and truly… but I learned a lot about chemicals and causes and reactions.

OK, let’s say, perhaps, for the moment, that gum paste might NOT be in my profile wheelhouse at the moment.

if you do not like sweet meringue things… then yes, SO can sit back till you are

I have to say I am so super proud of the gang at FLV… they really know how to treat us right.
I love them all… beautiful people… and I can not wait for the next batch of new flavors, gosh dog gone it!!

It freaked me out, really and truly… but I learned a lot about chemicals and causes and reactions.

OMG, because I LUV Rich Cinnamon, and it’s is hella strong. I can only imagine the aftermath.

if you do not like sweet meringue things… then yes, SO can sit back till you are

Oh I do get mah Meringue on, but I use FA Meringue, which I believe is the standard for Meringues…

but I use FA Meringue, which I believe is the standard for Meringues…

Remember, I don’t do standards… and I really did not get or understand FA’s version…
You know I am odd.
I know I am odd.
I will horde all the SO… in fact, I will go build yet another recipe around it and maybe toss in some Alpine

It’d be another 2 drop _ucking recipe

my thx for the detailed replies S. I will really have to add to my Flv stash to do your recipes justice. Strangely, before posting my question here, I was looking at your Shingle recipe and making an order to give it a try. Although I haven’t posted much here, I do ‘lurk’ quite a bit and I was very aware that you are the Flv Queen around these parts

Thx for the reply mate.

It was remarks by ID10T and mlnikon on the noted series re not using it with creams or bakeries that kind of flumoxed me. But, looking at some of SB’s recipes, it can have its place amongst creams, bakeries etc. Still on a tight learning curve wi this mixing and I am more than a couple of years in. Wish some of the players in the flav game would run a basic familiarisation course. I know that WW does one on his site but,and I hesitate to say it, I have tried quite a few of his recipes and they haven’t really been my ‘cup of tea’.

Stop lurking and come have some fun, Ed…
We get wild, can be rough… but folks here can be the most awesome friends…
With both good and bad tastes

Give the shingle a try, you will be happy you did… I don’t often upsize my juices unless I like them too much [that shingles is sitting in a 4oz atm, might go to 8oz in a few weeks, terrific base for a lot of tastes!]… as there is so much I can do with just Flavorah… some say I limit me… but… your taste buds are the only limit you have…

PS… you can pick my brain at any time… but as far as my flv notes… I have yet to formally write the book… it might show up tho… will take me a bit of time.