Let me start by saying this is not so much a review, as the perfect review was already mastered by @steampugs. This is my opinion and thoughts on the Aegis 100, provided through giveaway from the wonderful folks at 3Avape. 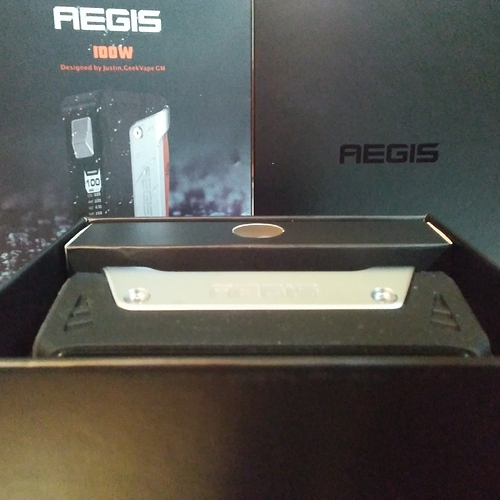 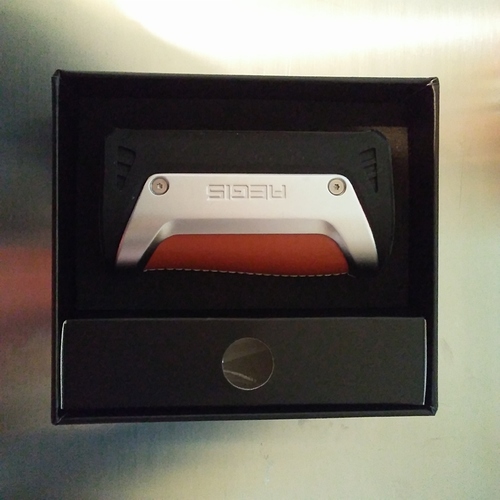 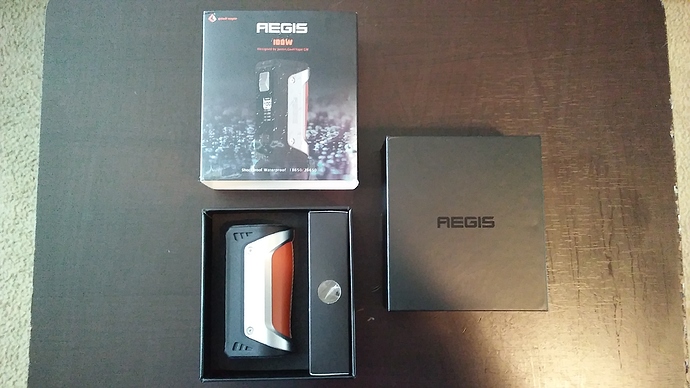 Product Dimensions:
37.8mm by 46.8mm by 88mm
*The picture below is my reason for not intentionally damaging the mod, I mean even the damn book says not to. 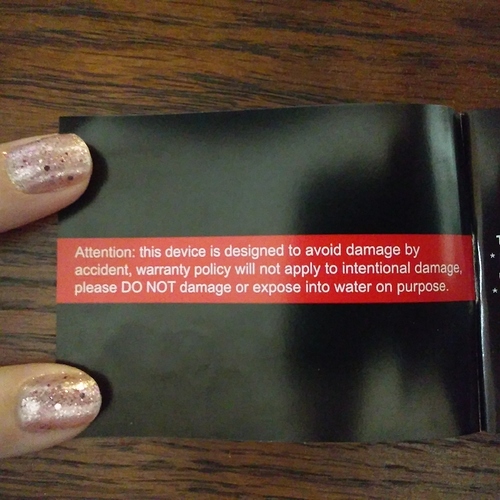 The first thing to catch your eye is the 510 connector, and the plating. It is huge and magnificent, and more importantly, should you overdrip, this makes it a breeze to wipe from, no small grooves or valleys for the liquid to fall into, only the small gap between the plating and the top of the mod. The fit is snug, it does not feel like it is overtightened, nor does the atomizer feel wobbly, it sits perfectly. For an atomizer 24mm or smaller, the plating is going to show, as the diameter of the plating is quite large. 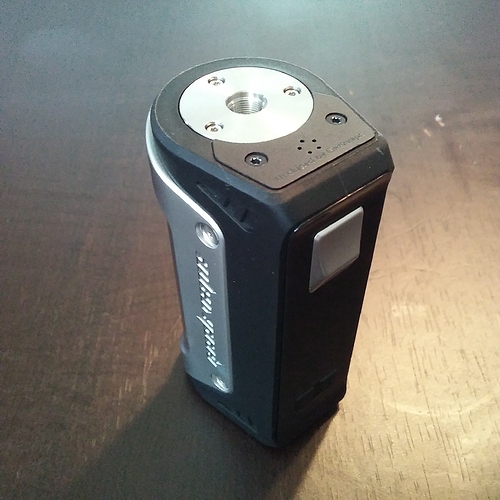 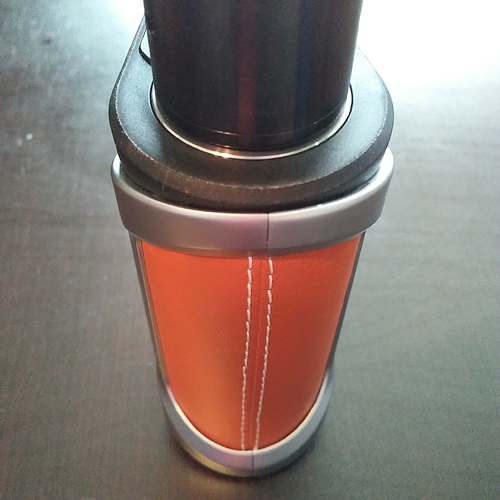 Can I just say, I am absolutely loving the firing button. It is quite large, light-switch style, and the click is the most satisfying click I have ever gotten from a mod button. The (+/-) buttons are sturdy, without any rattle. The firing button is also very comfortable on the fingers, whether you hold it facing you, or away. 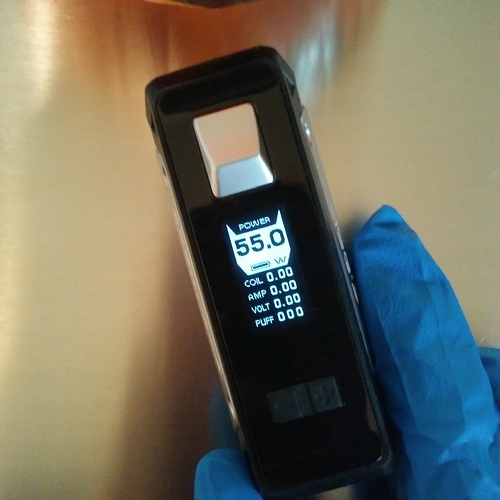 The LSR (Liquid Silicone Rubber) coating feels amazingly smooth when gripped, giving a real sense of protecting the mod from the dreaded ‘slippage’ as well as any drops. Ever rush out of the door with your hands full and your mod held under one of your arms? Mods that have a smooth paint coating are not only slick, but that paint coating eventually wears off after so much contact, especially given the fact that we all have a preferred way of holding our mods, and usually grip the same spot during use. Just like an Xbox Controller, added grip makes for a better experience. The leather and stitching is beautiful, even if it truly serves no purpose whatsoever. 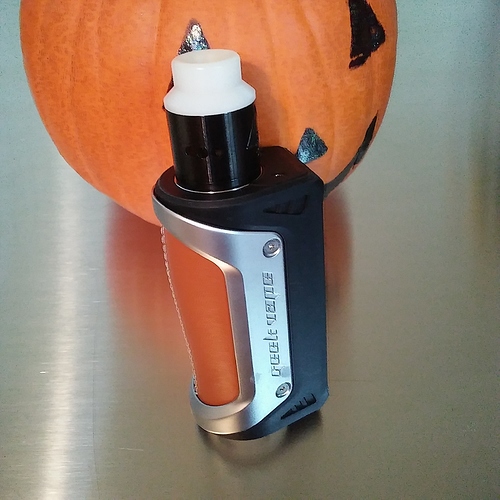 The Aegis is 5 On/Off as usual, and 3 clicks while on to cycle through different modes. The option to adjust brightness is awesome, you simply hold the fire button and the + or - button to increase or decrease brightness. I have mine turned all the way down to 0% (for battery). VPC Mode is a neat little feature, it allows you input five values, each representing a second, and it even displays a graph of the curves you create. Want a higher wattage the first second? You got it. VPC Mode will continue with the 5th input value until you release the firing button. I may play more with this feature, but I can see where it may impact the battery life a bit. With the latest firmware, you can hold (+/-) down together while the mod is off to display the firmware version.

Battery life would probably have to be the deciding factor for someone looking to buy the Aegis. If you vape high wattage and ohm out super low, this may not be the mod for you. I say this because the life you would get from a single 18650 would be minimal, a 26650 slightly better. I bought an Ijoy 4200mah 26650 to use with the Aegis, which provides about 24 hours of usage for me. I use 56-65 watts, but my coils usually ohm out at 0.41-0.42. I can get around 2 days usage from a dual 18650 device using 2 Samsung 30q’s. You would need to plan on having at least 2 26650 batteries unless you rotate out devices. 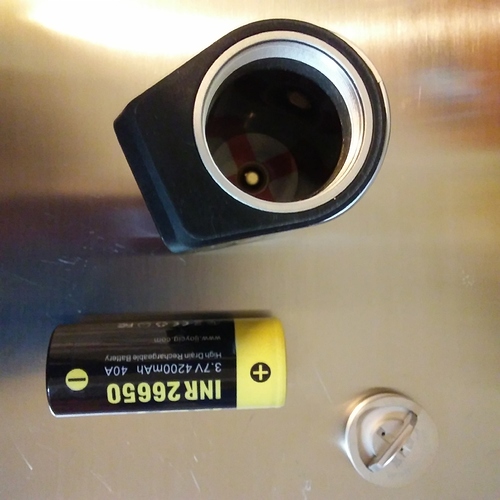 I love this feature. My vape sessions using the Aegis are somewhat shorter because I get way more satisfaction from the hits than on my other devices. I take pretty long draws, and with this mod I have cut off a second because of sheer speed at which this fires. My draws are not long due to ramp up either, my coils heat up fast and cool down just as quickly, I just like a long, lung filling draw.

After removing the 2 Torx screws on the top of the mod where the vent holes are, there is a small silicone rectangle plug that must also be removed. I had to go through several cords before finding one that fit, not because of the type, but because the micro USB port is buried down quite low into mod itself, the black casing was hitting the top of the mod before it had a chance to fully plug in. Geekvape’s website is not clear on firmware update instructions, in fact they say ‘repeatedly press’ when what they mean to say is ‘hold down’. Steps are below.

To update the firmware:

Edit: 10/17/2017
Upon testing the latest firmware, version 1.23, I noticed a significant drop in power even with a fully charged battery. My wattage would drop from 55 to 53.0 and 52.0 during a hit. This started immediately after updating the firmware. After reading of the issues regarding firmware versions 1.21 & 1.22 I decided to test these and the result was even worse. With firmware updates 1.21-1.23 the mod was almost acting as though it was in Bypass mode, or going directly off my battery even though I had more charge than the power it was giving. I decided to roll back the firmware to version 1.20 which has fixed the issue completely. I am now getting adequate power from my battery. I would suggest letting Geekvape get further with their firmware before updating, or roll back to version 1.20 if you notice any issues after updating.
*Version 1.20 is now simply Version 1.0 on the download page as of Feb. 2018.

This mod is great for outdoors, clumsy people, women, men, and me. Specifically me for my wattage range and resistance though. If you vape like my husband, not so much. The 26650 wouldn’t last him the day, not even close. But, there is a but, if you are getting this for its ability to withstand unfavorable conditions, then it is a really good buy. I know if I drop it with my hands full, it will still be functional. I can’t say that for tank users, as the glass would go ker-splat. I love this mod, and the draws from it are incredible. Would I have bought it myself? Probably not, but the only reason for saying no is that I tend to stick within a certain price range for myself, as I spend more on DIY and flavors than devices. I would buy this again if I had to though, it is a thoroughly enjoyable mod. I have one thing in mind buying for myself, and that is longevity. I can see this mod lasting me a good long time. 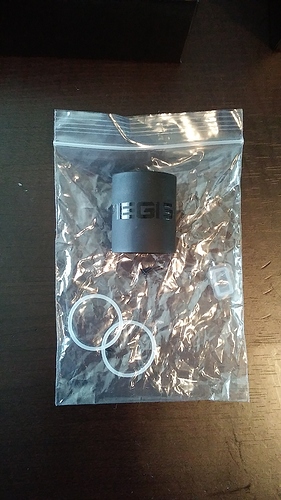 Nice write up. I’m loving my Aegis as well. The VPC mode is pretty sweet. I’m still fine tuning mine, but it has taken my vaping experience to a new level. 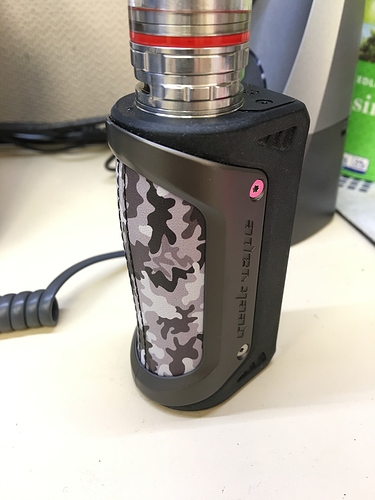 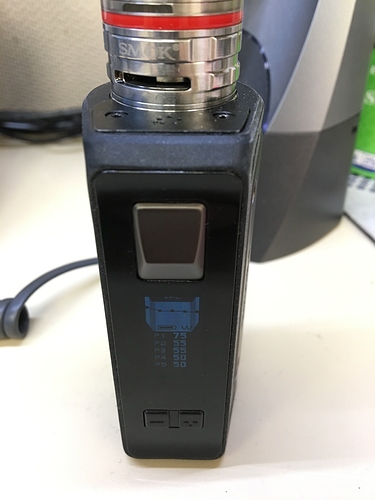 Has anyone tried it on temperature control?

Great job!! I really loved the fact that you included instructions on the firmware since the website was not clear and tried to address battery life which is hard to express being so relative. I did want one before but u virtually put it in my hands there for a bit where i got the look and feel of it. Thanks!

I know there were some issues regarding Temp Control with the firmware that was released with the final retail version, according to some reviewers, and a firmware upgrade to the latest version seems to have improved it greatly. I have only tried TC with SS on the Aegis, which worked splendidly for me. Although, maybe it’s just me, but comparing the same temp to my Cuboid, my Cuboid seemed just a smidge warmer. I tend to use Power Mode though, so I can’t attest fully to the TC mode with the Aegis.

I didn’t want to say this, obviously because it makes me look like a doofus, but I sat there for an hour trying to figure out ‘ok, are my USB ports working’ because simply plugging it in and pressing the button does nothing, in fact the PC won’t even see it unless the button is fully depressed. It was an angry hour.

It seems to depend on the tank. With my eleaf ello tank, it’s wavy enough to piss me off and I almost sold it. But after I calmed down and put my SMM on their it’s currently working good. With tcr of 105 ss316l. I only have a couple days using it so my opinion might change.
One big negative for me is they have the device weak battery to high something around 3.35ish and the last 30-40 hits are too weak. I guess their trying to be extra safe but it could really last a lot longer and hit harder till much lower.

Sorry if that last sentence sounds crazy, hopefully you get the point. I would recommend it. They could make it better with another firmware update. I do have the latest firmware.

Yeah it seems to vary, I have yet to get weak battery even below 3.4, not that I use it much beyond that anyway.

First, it is really well built no complaints there.

I’m trying to say that it could drain batteries down to…maybe 3.1ish and have a very steep power down curve to lockout.
I’d probably get an extra 2-4 hours of vape time.

Very well done review, thanks for taking the time to share!

Thanks y’all, I’m rubbish at reviews, but I owed it to 3Avape to give it a whirl. I am having a bit of a test run tonight. I have noticed some oddities concerning the firmware, specifically the latest version, 1.23. On a full (brand new 26650 battery) my wattage was decreasing heavily upon upgrading my firmware. I have read of issues with 1.21 & 1.22, but it looked as though many thing were fixed. So I set out to try the other firmware versions, and 1.21 & 1.22 are pretty bad for wattage mode, almost acting as Bypass. So tonight, I rolled back my firmware to 1.20, and to my surprise, my wattage is staying right where it should on a full charge. I’m not getting the decrease in wattage like I was with the versions 1.21-1.23. I think until these issues are fixed, I am staying with the original firmware as it seems to be performing the best for me at this point. I would say that if any of you notice a significant drop in power while your battery is mostly full to roll back your firmware, and see if this alleviates it like it has for me.

Great review, not too much babbling, direct with the info and plenty of useful info. My GF loves her Aegis, and i was afraid she would start getting annoyed by the size of it, due to her coming from the Pico, so a huge size difference, but she loves how it feels in her hand. Considering how many hits the Pico has been taking and almost falling apart, i think the Aegis is the right choice for her.

Biggest cons is the size of the mod considering it is a single mod, but trading that for doability should be worth it. Also the lack of being able to charge through USB if needed, but again that is the price to pay for it to be properly sealed.

Very good write up! Thanks for sharing.

Great review, very informative and well written. Thanks for your insight

Great review @Silhouette!! You got right to the point and did an awesome job at explaining the details.

Thanks everyone, I appreciate the heck out of it.