Anyone have a good mint or chocolate truffle recipe?

I was in love with Johnson Creeks truffle line, but they discontinued them. I found some in the UK and ordered them to the states. They’re not as good as they are old; a chemically aftertaste now. I’m looking for a way to mix chocolate well, as most chocolate mixes don’t turn out well. Thanks in advance!

This is a private recipe (made it public) I have for a mint chocolate biscuit which you are more than welcome to use - if you don’t want the biscuit just ditch the cookie and biscuit flavours (the cotton candy can also be ditched if you want). Make sure the inw milk chocolate is the old formula or you will taste minty foot band-aids.

The best and only chocolate truffle flavor I’ve found is here.

Try it out at 1-2 drops per 10ml. It’s super strong and if you use too much it will taste horrible. These flavors are rebottled bakers flavors if you wish to look into them more.

Chocolate truffle is a very good chocolate 0.5% - 0.8% it was my go to chocolate for quite some time and will likely be again now inw has changed formula - if you can get hold of inw milk choc v1 it is easily on par if not a little better with the choc truffle taste wise just a little creamier for me.

I tried inawera milk chocolate about 2 years ago but got a terrible chemical back taste from it. I also got it from multiple other inawera flavors. I just recently bought custard and creme brulee and I was surprised that the chemical back taste was somewhat gone. I can still taste it but it’s definitely not as bad as it was. I bought all if my inawera flavors from bullcity and they were original bottles (not rebottled).

chocolate is the reason I started diy.

Thank you for the reply! Do you have an outlet for the V1 INW milk chocolate? And who is the maker of the chocolate truffle you are referring to, the VZ-SC? That one is a bit pricey for 10mL of flavoring!

Thank you! Haven’t heard of this manufacture before. I’ll bookmark it.

This is a good list of new chocolates to look into, thank you!

The chocolate truffle is made by bakers flavors from Russia. Vaping zone is located in the US and they rebottle bakers flavors. It’s totally worth the price because the amount you use is so little. You will be able to make a ton of juice with 10mls of flavoring.

I know of two places that both have v1 inw milk chocolate both are in Australia if you are willing to buy from here and get it to where you are in the world.

I have bought v1 off them both in the last month. Now I will say since inw have not changed the name of it or added a v1 or v2 to its name there is no telling which version you will get. It is a bit of a crap shoot. An email to either supplier asking when they got the current batch will tell you if it is new or old (sorry i cant be more precise than that).

To identify it look here

So i got a bottle of the new formula inw Milk Chocolate and it tastes like a bandaid that was put on a foot and left there for weeks - I went on a quest to find the old formula since it is so so good I lucked out on my first try (glad because I bought 5 bottles). I noticed that the new one is a lot darker than the old, aside from the distinct colour difference there is a clear off note in the new version that just doesn't steep out (when i have to I am going to look at percentages).. Not ea…

To buy it go to either one of these sites 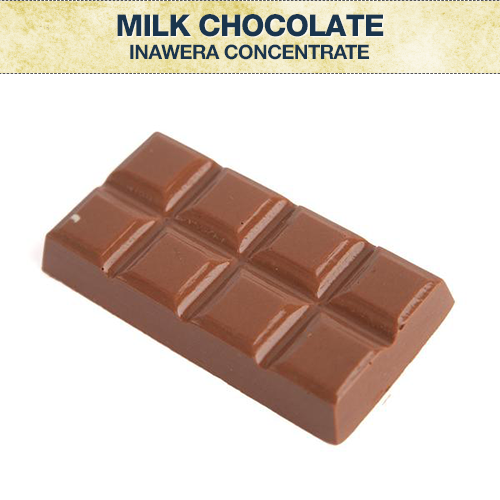 @juice_junkie_lover is 100% correct the truffle is pricey but not pricey due to the small amount you use. Given that the inw v1 is a bit of a chance I would consider using the choc truffle.

I also agree with the statement regarding real flavors chocolate, real flavors Brownie, fa chocolate, fa cocoa (at low watts), and hangsen Australian chocolate. I have not included MF since I don’t have any experience with it.

Most chocolates (aside from the inw and the choc truffle) I find have a dry almost chalky taste to them which can for the most part be removed with creams.

I use Malted Milk (TPA) at low % (0.25) to smooth the harshness that chocolates can have I also find that Vanilla Bean Gelato (TPA) (1.5%) will give the chocolate a waxy mouth feel closer to that of a real chocolate.

If you’re located in the US, I’ve heard that ECX’s Jungle Flavors Milk Chocolate is a good replacement for the reformulated-and-now-disgusting Inawera. I’m also pretty sure (like maybe 90%) that the Vaping Zone Super Concentrates are the same ones that Bull City Flavors sells as Super Concentrates and that ECX sells as Flavor Express.

I’m looking for a way to mix chocolate well, as most chocolate mixes don’t turn out well.

For me it’s Dark Chocolate MF all the way. I’ve tried several chocs and cocoa, brownies, choco donuts. Once I got the MF Dark Chocolate it was game over for me. I’ve finally found the one.

Yes it’s expensive, but the usage % is so low and the taste is so spot on, it’s really worth the price. Most times 0.3 to 0.8% is all that’s needed for a great chocolate note. Combine this DC MF with creams for a top milk chocolate base or add Mint MF for a Andes Mint flavor.

This one is really the best IMO… A real universal chocolate I can use in any type of chocolate mix I choose to create. No chemical or synthetic taste with this extract. I’ve heard some chocs get weird when vaping at high wattage. This chocolate holds stable regardless of your vape style. I have yet to make a mix where this chocolate didn’t work as I hoped it would.

Wow. This sucks to learn. Ina’s milk chocolate has been a solid flavor for a long while for me.

The recent issues (RF strawberry, and now Ina’s milk chocolate) coming to light are starting to make me leary. IMHO, there’s something wrong with making unannounced changes to an established flavor formula. I mean, I would understand completely (and expect it) from a beta flavor. I even value the idea of beta testing publicly. But once you release and market a flavor…(again, IMO) manufacturers no longer have a right to fuck with the formula. You’ve created the standard for people’s expectations. Now honor it!

If for some reason, a material component goes NLA, or some health concern comes to light, fine. We expect the manufacturer to address the situation accordingly. But please make said change readily identifiable, and easily distinguishable. ><

Since we’re “on the topic”… Has anyone experienced any changes to Ina’s Chocolate Cream? (Hoping the answer’s ‘no’ obviously)

Side note: given that RF is relatively new, I am kind of inclined to give them a minor pass (rather than going straight to ‘pissed off’) on changing flavors, though it’s still something that I consider falling into the ‘situations that could have been prevented’ category -since it seems like common sense to me. But as for established companies with established formulas doing it? That really does tend to lead me straight to pissed off.

Remember “new Coke”? LMFAO.
Pepsi Clear? And in recent years, Hershey changing the formula for kisses, or Oreo changing the cookie formula… The latter two also unannounced. I bought my last bag of kisses three years ago, and my last Oreos recently. Grrrrrr.