Looking to make a flavor I make a lot into a “mio” type water enhancer. Does anyone know where to start? just flavoring and PG?

You’d probably want a sweetener, too, if you’re wanting to mimic mio. Sucralose would probably be the easiest to work with but a 1:3 ratio of stevia:erythritol would be good too.

I don’t think you would need to add the pg. Try a few drops of flavor in a small amount of water. You could mix the recipe as is without the nic, vg, and pg. Sometimes I do this to try out new single flavors to see what they’re strength is like. Keep adding drops until you find your sweet spot. You could also try adding some Splenda or whatever sweetener you like as @VapeyMama said. Just take a small glass of water (roughly 3-4 ounces) and give it a try.

I don’t know Mio but after a quick google, it looks a lot like a one-shot-concentrate.
If you want to make those: 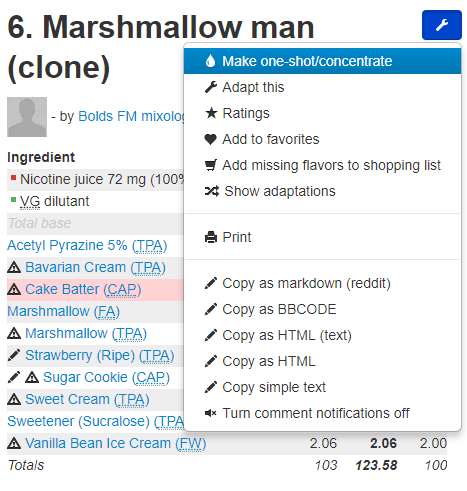 Then when you’re done with your flavor concentrates, just add the required flavor % (whatever was in the original recipe) to your PG/VG/Nic mix. 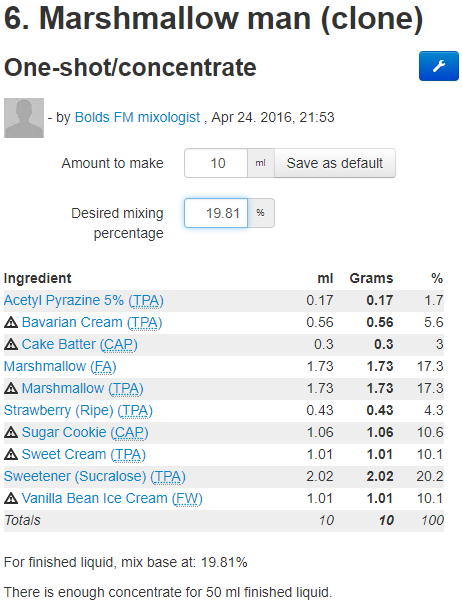 PG might help keep it all in suspension and eliminate some bacterial issues. Maybe 50/50? Use boiled distilled water for the other 50. Make sure everything is super clean and SHARE

What are the ingredients for Mio [he said as he googled] I’m sure they did a bit of testing on their liquid base.

MiO is a liquid beverage mix owned by Kraft Foods, which intends it as an additive to flavor water, carbonated water, and other beverages. MiO products are artificially colored and sweetened with concentrated syrups. Caffeinated variants of the MiO brand are marketed as MiO Energy. This version of the product contains 60 mg of caffeine per serving. All MiO products contain propylene glycol, except those sold in Canada. MiO is listed as containing less than 2% natural flavors. Other listed ingre...

Avoid flavors with PG for water flavorings. It makes the water have a funky taste. For a 1qt bottle…a large soda stream bottle, I use 2ml RF SC OR 5-10 drops MF OR 5-10 drops NF and I add zero sweetener. I will add 150mg caffeine though to the water mix

Water flavors also usually have citric and/or malic acid in them to help the flavor “pop” I guess. I’ve tried using flavors for water before and it was okay, but I think the acids may have made them better.

@Walt_RealFlavors had a soda recipe a while back that looks perfect. I hope I saved it somewhere but I would think one could omit the water and just have a “mio” concentrated drink. I do add acacia gum to my sodas because it makes the “mouth feel” otherwise the soda will taste too thin and citric acid is in this. Let me look for that recipe when I get home from work or unless Walt steps in.