Anyone try these new pods?

Seeing more of them, haven’t tried them. 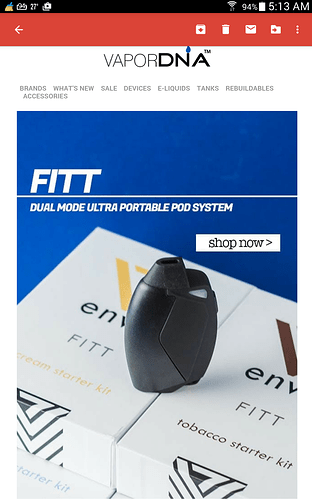 What the heck is that? lol

ecf has a mega thread about all the various pods and even created a dedicated sub forum for all the pods coming out. i have no interest in them

Looks like a similar concept of the iCare by Eleaf cep the FITT looks to have a firing button as well as draw activation. I have 2 iCares they’re a decent hit on occasion battery is meh more on the lines of you don’t want to carry a heavy battery and for a stealth hit they still put out a fair amount of vapor but then again I vape Max vg and the iCare does fine w/ it.

I don’t have any further desire to buy any more of them two is enough. The FITT is way too pricey for what it is especially when you can get an iCare for around 14 $

If I’m not mistaken one of the vendors posted something about these a while back. They tried to get a contest going to give one away.
It wasn’t well received so they cancelled the giveaway.
I can’t remember what vendor it was. It was one of the vendors based in China.

Vape fellows, if you are looking for a real simple & effective vape device to quit smoking, or wanna a cool device for vaping, or only need a portable backup device for on the go, then we have a good news for you. iPhone manufacturer, Foxconn released their first vape gear, called as Suorin Air, which is a beautiful all-in-one kit. It continues the same thin appearance of iPhone, with a dimension of 86x43x8mm, really pocket friendly. Unlike other similar products with no button design, this devi…

Yes they are, but I think the lack of support was directed (or undirected ?) more towards Suorin Air than Heavens Gifts. At least that’s the way I took it.