Thanks to the wonderful Christina at Heavens Gifts I bring you the Artery Baton Kit with Hive S Tank review. 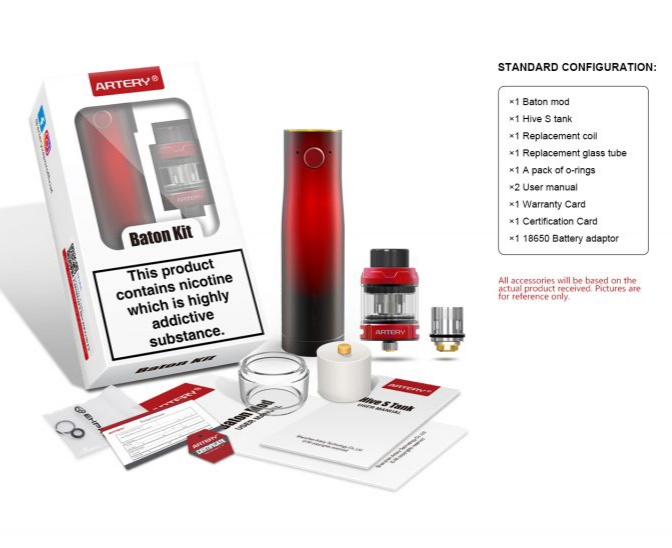 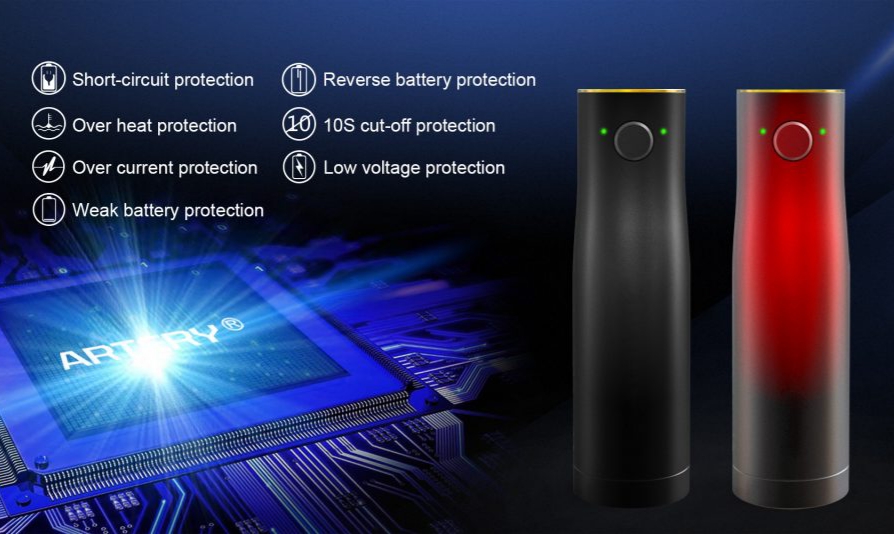 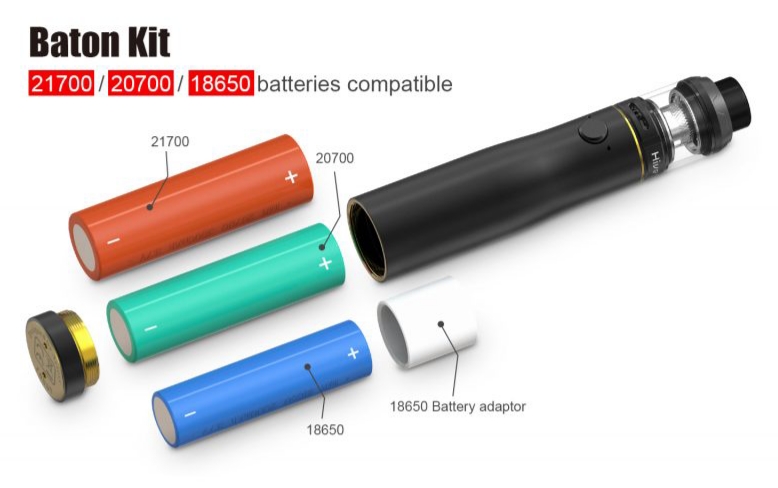 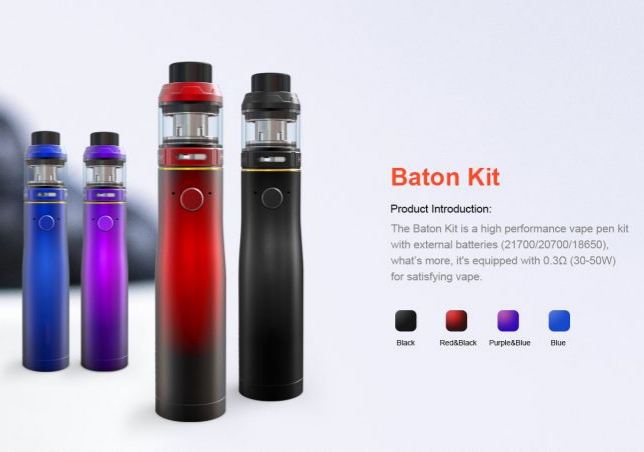 That’s right people, a semi-mechanical is what Artery likes to call it, basically, you get what the battery gives in volts like a Mech mod but with built-in protections like reverse battery, low voltage, short-circuit…yada yada yada like most regulated mods except this one you can’t control the voltage or wattage output, just press the button and vape on.

These kinds of mods have been around for a while but not too many with 21700 and 20700 battery compatibility. They also include a 18650 adapter but whatevs, gimme that good 21700 love baby. 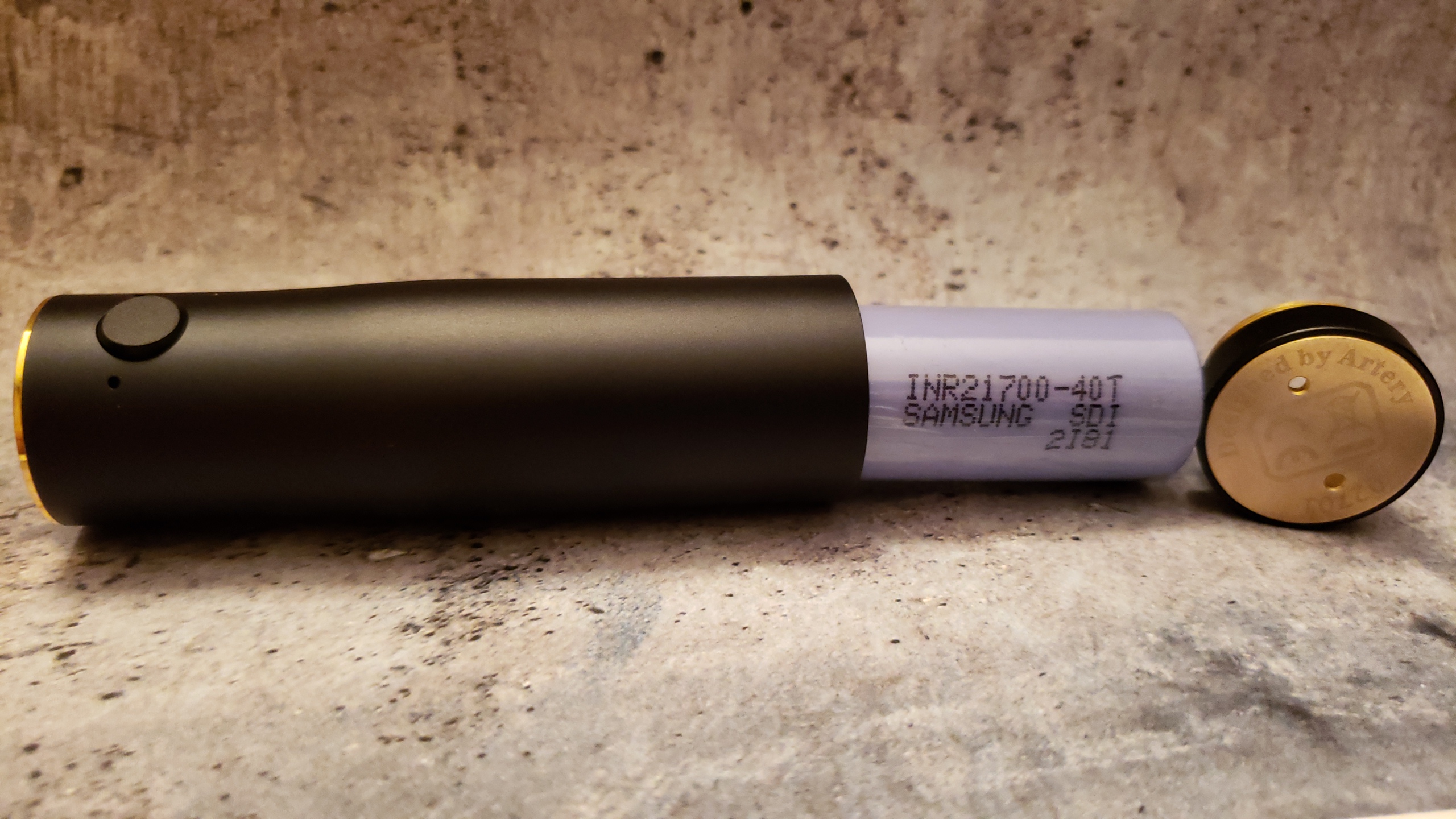 For a single 21700 mod it is pretty compact and fits good in the hand. 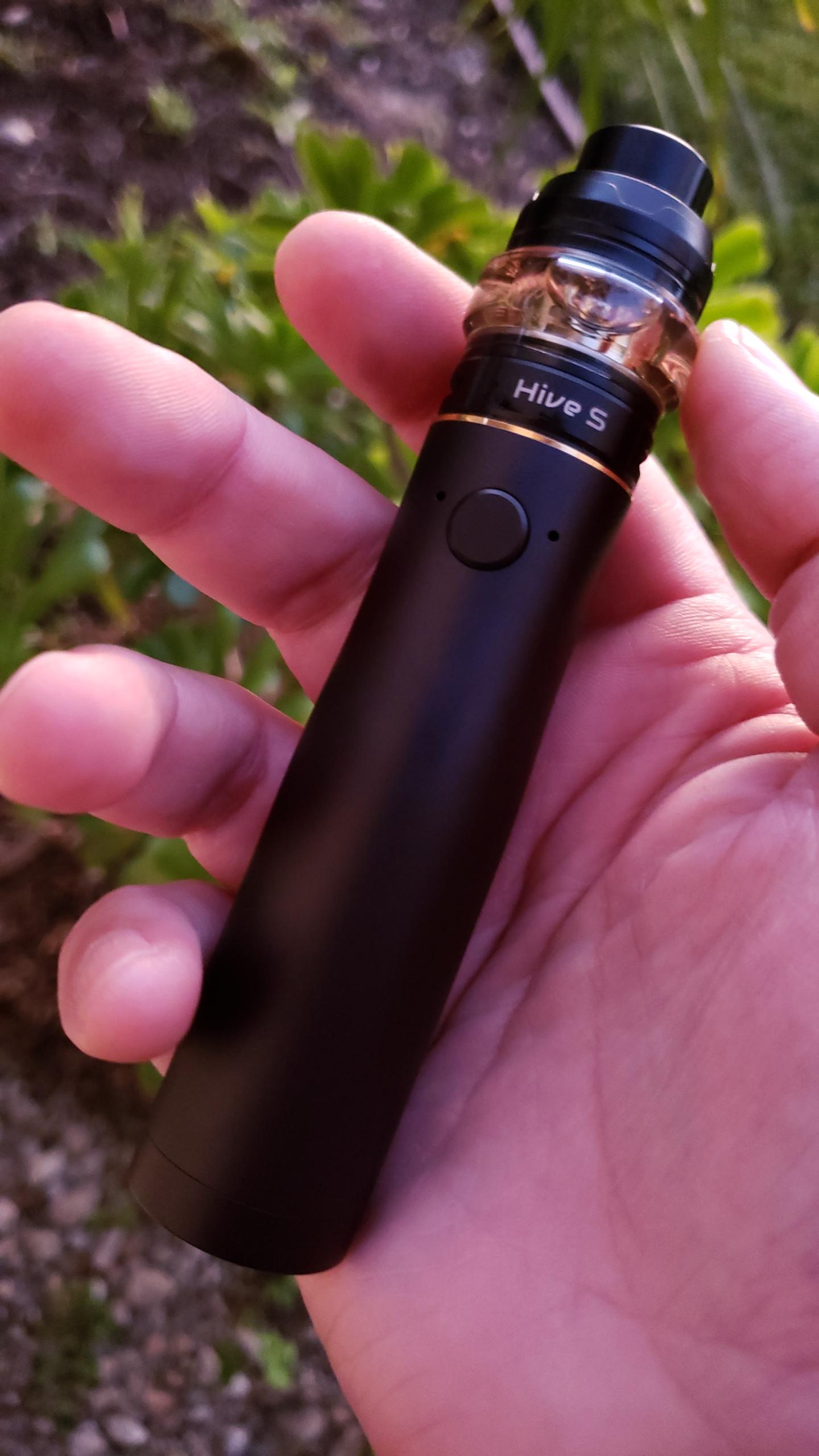 Compared to a couple of my other 21700 mods it is a dainty little fool. 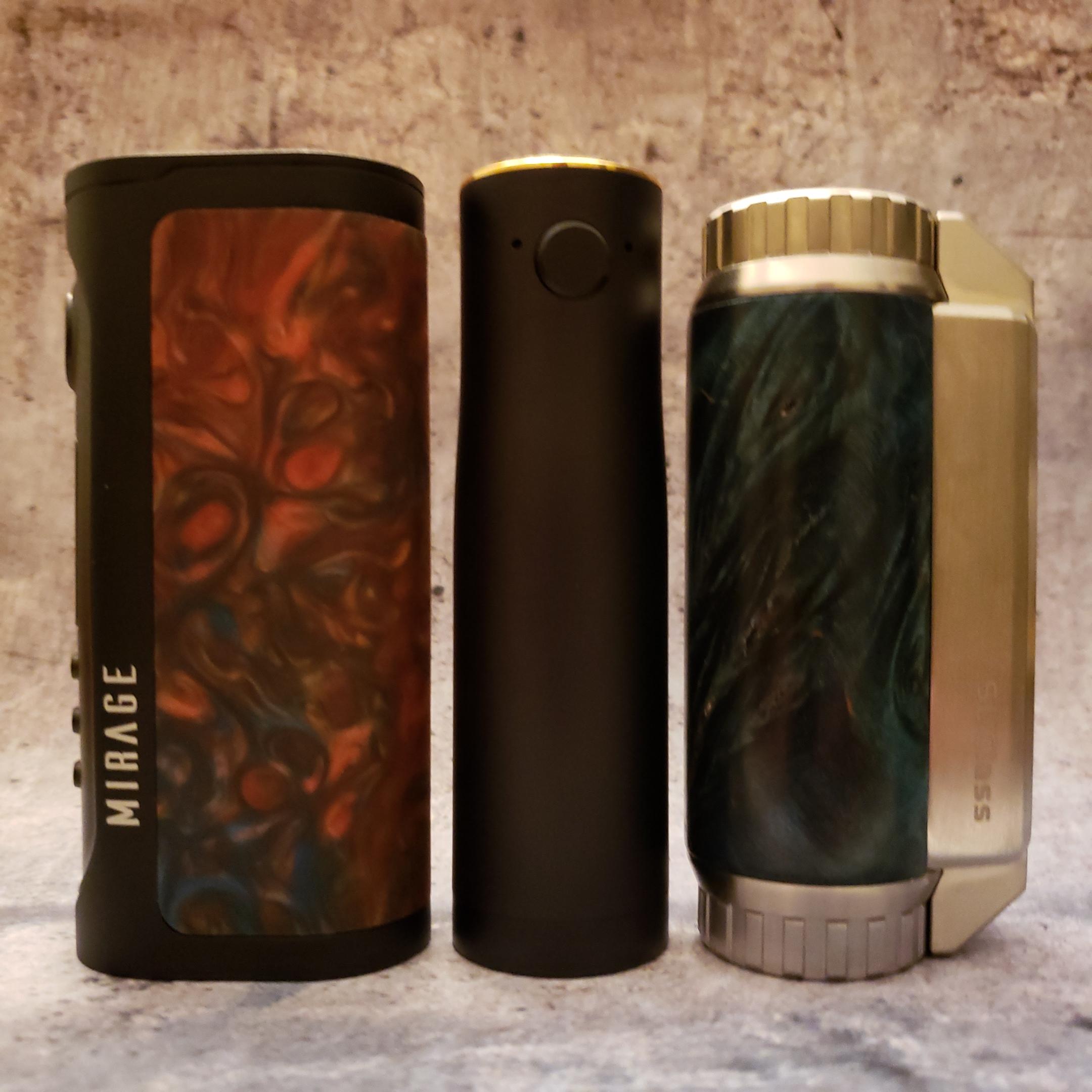 Even includes dual LED’s on either side of the fire button to show battery status, green is full, then some other color, I think orange then red when it is getting low. LED’s only come on when pressing the fire button so no worries of it draining the battery when idle. 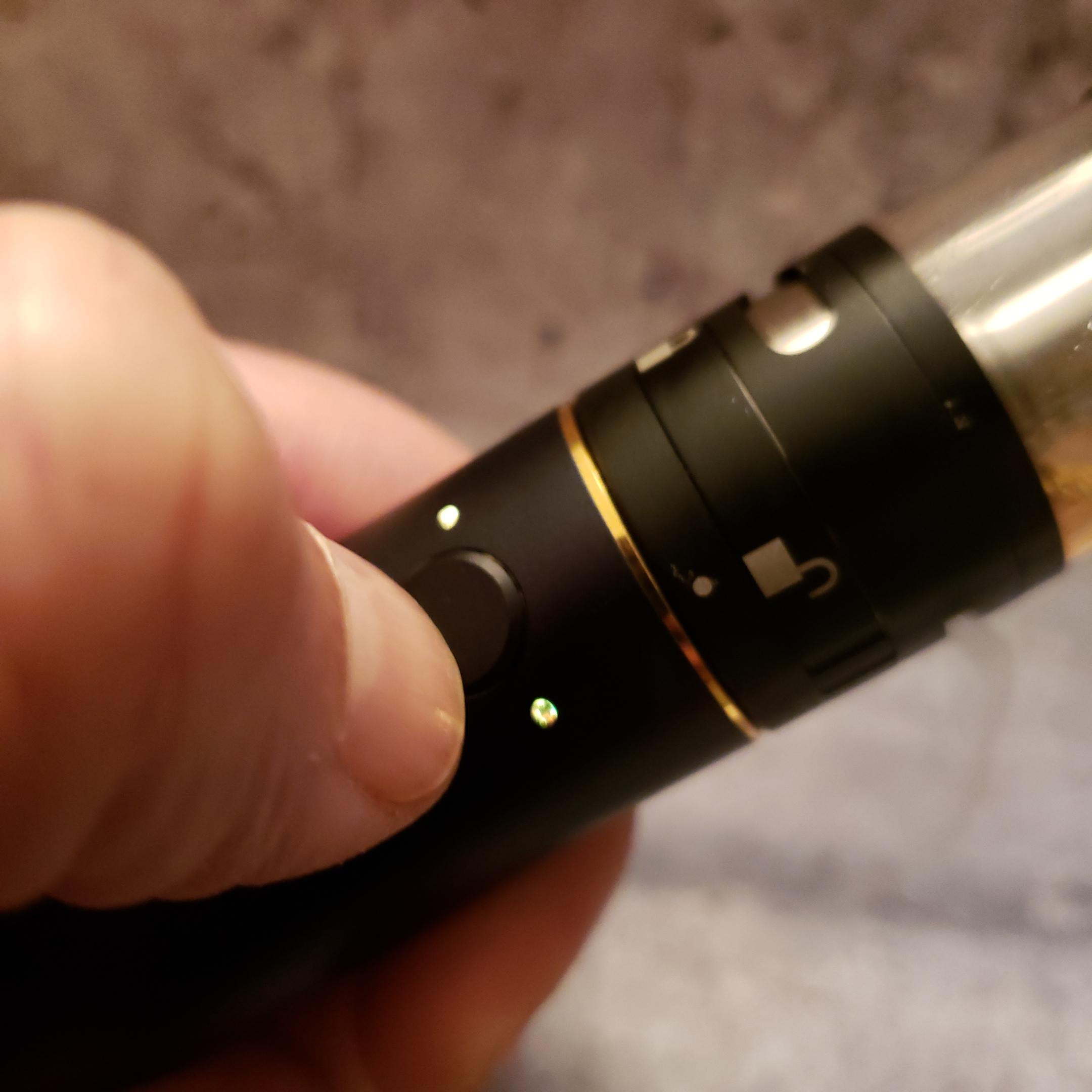 Easy peasy operation, 5 clicks to turn on or off and press the fire button to get your vape on, that’s it folks.

Clean looking design with no branding anywhere on the mod aside from the battery cap and the gold plated 510 which has a decent amount of travel. Most of the tanks I tried sat nice and flush aside from a couple with longer 510’s had a slight gap which you could see when a light was behind it. Funny thing is the Hive S tank that comes with the kit also has a slight gap. 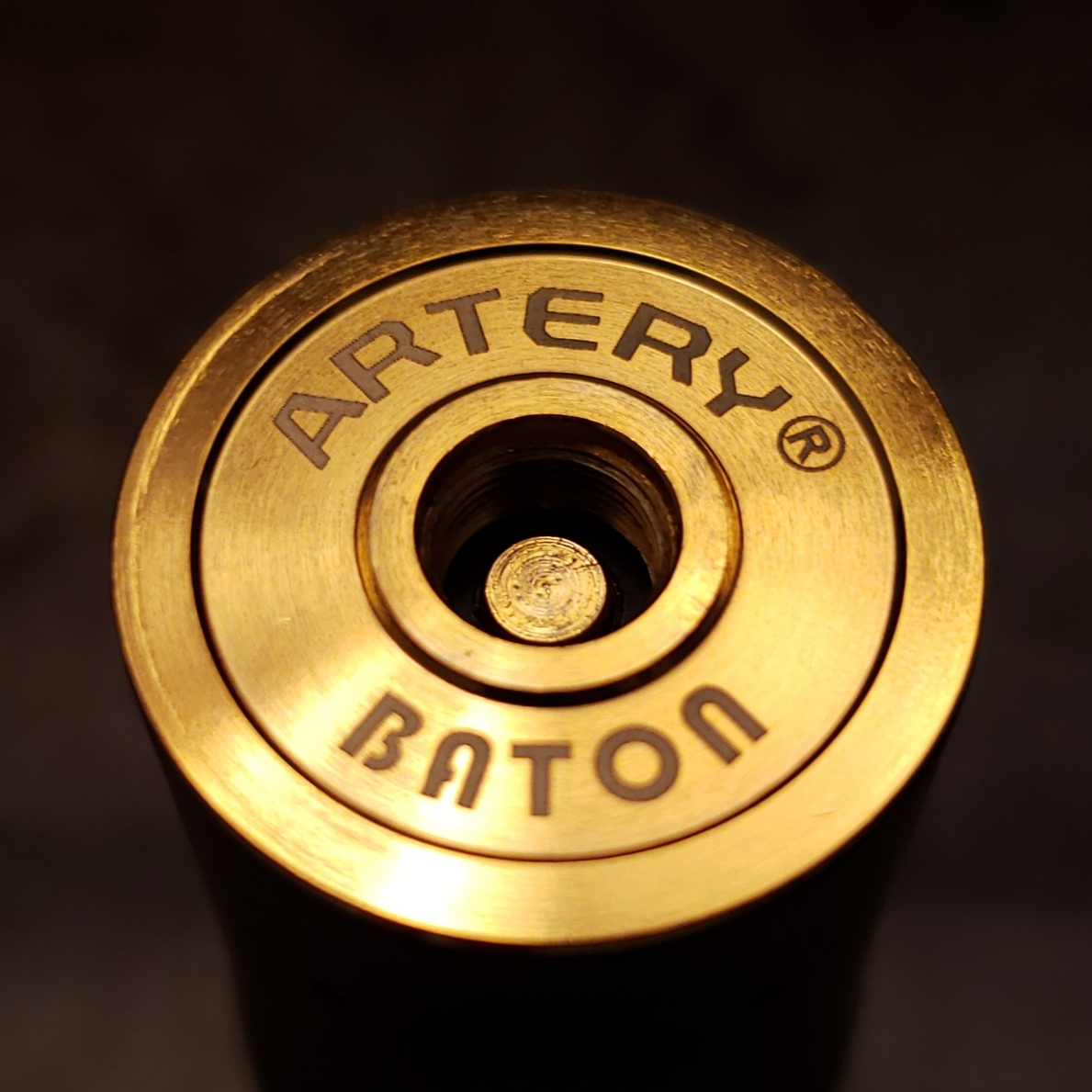 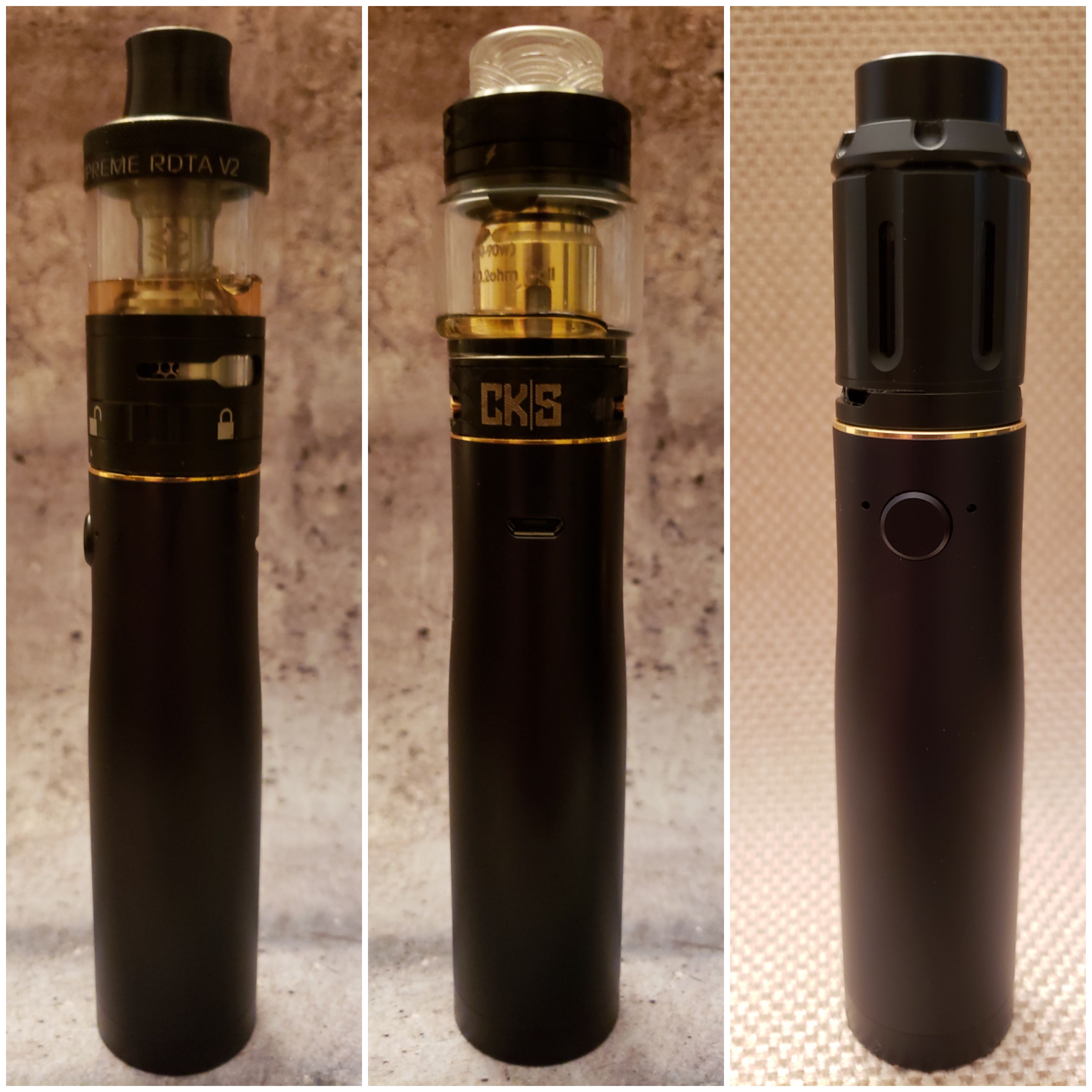 The tapered design is kinda cool, measures 27mm on the bottom and tapers down to 25mm at the 510.

The battery cap is great with buttery smooth threading, the only con I had was it is a fine thread so takes a while to screw on and off, nitpicky for sure but I am impatient so notice those kinds of things.

The finish has been excellent, not a spot on it even while being in my pocket a few times and taking a tumble in my car when taking a turn way too fast.

Since this is a “Semi-Mechanical Mod” I compared it to one of my Hybrid Mech Mods that uses a 21700. The same battery used in both, a Samsung 30T 21700. Right off the bat, I can tell you the Baton mod doesn’t hit as hard, must be some voltage sag due to the electronics. Not a huge difference but noticeable and as with all mech mods the power drops as the volts drop. Still, the Baton performed admirably during my use, no real complaints and not once did it give me any trouble during the full month I had it.

Not really much else to say performance wise, it just works like most Mechs with added safety features… let’s move on.

Battery life was great with this thing, trying to find the battery cut-off voltage seemed like it took forever. I measured 3.25 volts when I got the blinking red lights on the LED’s and the mod stopped firing. Of course, this will all be dependent on your build, for single battery mods I like to use single coil RTA’s and they worked like a charm.

One thing it has an advantage over true mech is a USB port for pass-through charging on the go. You should always charge your batteries on a charger instead of using a mod but when in a pinch it worked great for me, I can charge in my car and still use it.

The Hive S is pretty much your standard small mesh coil sub-ohm tank. By small I mean 2ml with the straight glass and 3ml with the bubble, not much capacity…ugh.

Measuring 24.5mm doesn’t make much sense, how about 25mm to match the top of the mod? Doesn’t look bad but 25mm would have looked better IMO.

Standard mesh coil, nothing fancy or dual/triple configurations. You get 2 coils in the kit, there both the same. The wicking is a wood-pulp + cotton blend. 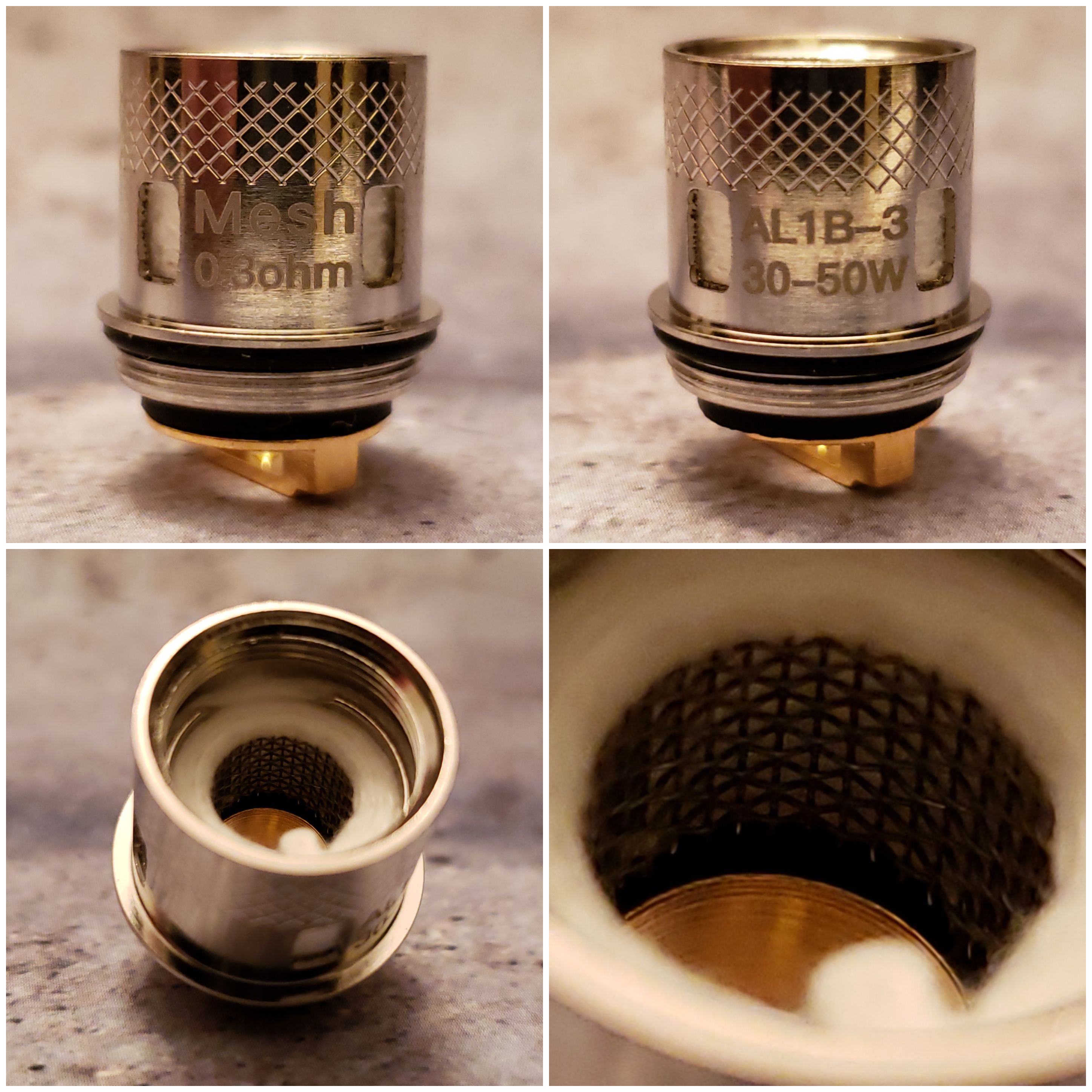 Baby beast compatible and comparing to the Smok Baby mesh the Artery coil has a bigger opening meaning bigger airflow, wide open it is really airy, I generally ran it with the airflow closed down halfway. 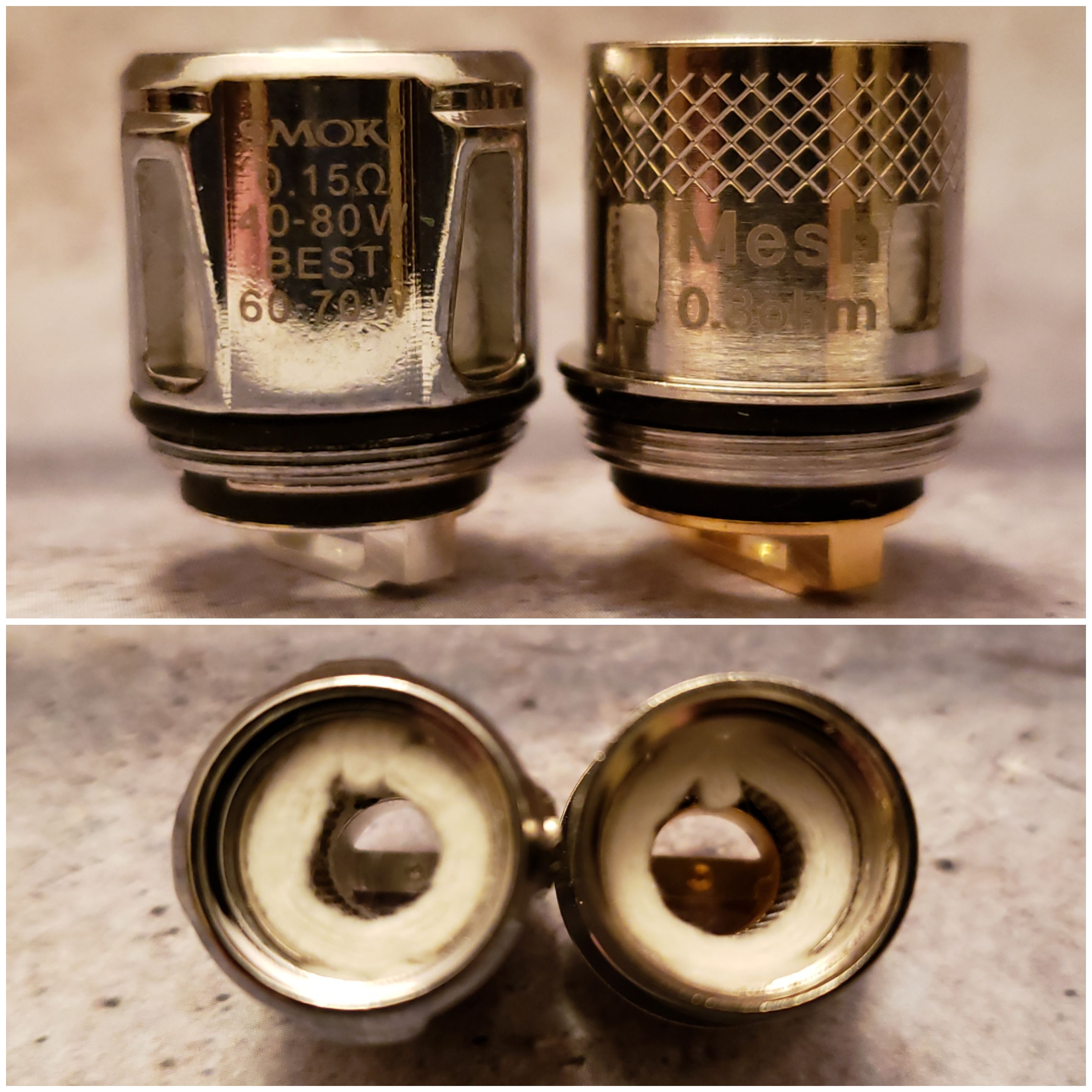 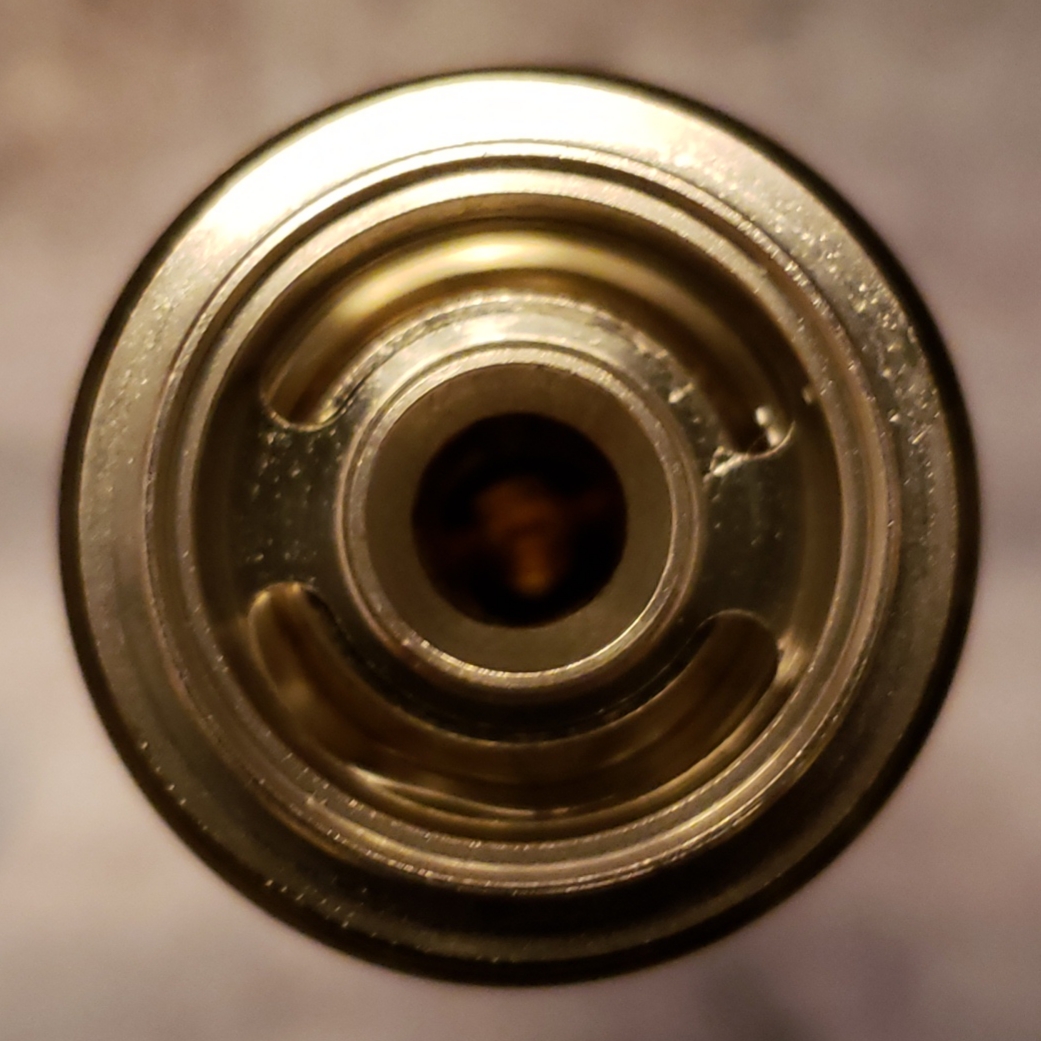 Performance on the Baton mod and on other mods

When starting off I do my usual practice, down a gallon of beer while watching football…then I dropped a bunch of drops of juice on the coil to prime it, fill up the tank and let it sit for 5 to 10 minutes to fully saturate the coil. 5 to 10 beers later…errrr, I mean minutes I began using the Hive S tank with a fresh 21700 in the Baton mod and hmmmm, 3 hits in and dryness, need another beer. Maybe it needs some break-in time? Continued to use it and damn, can only get a few hits in and then dry hit city, wasn’t diggin it. Decided to just take shorter hits and not as many until I went through a tank full, maybe then it breaks in? …Nope. The coils are rated to 50 watts max and at 0.30 ohms that is claimed 4.2 volts gives close to 59 watts, not too far off I was thinking. Then I decided to check the ohms on my ohm meter and it read 0.27 so that comes to 65 watts on a fresh battery. Definitely wasn’t working out unless I just took quick 2 or 3 second hits and chain vaped 3 or 4 draws max, if not, dry hits again…ugh.

I then put it on a regulated mod and found the sweet spot between 40 to 45 watts and from then on it is a decent tank with OK flavor, at 50 watts it tended to get into the dry hit area again.

The Hive S is not a bad tank but not a great tank either. Mistake on Artery’s part to include coils that are rated too low to work on the Baton mod at full volts. Unless you are the type of person that takes 1 draw than waits a minute to take another draw this combo might work for you. If you like to chain vape then good luck, I hope you also have a bottle of water handy and some throat lozenges to alleviate the dry hits.

As a kit I think it is a fail, the coils that come with the Hive S tank work best in the 40 to 45-watt range but at full volts, the Baton mod is putting out 65 watts which is too much for the coils to handle. I like the Baton mod, good battery life with a 21700, USB pass-through charging, durable finish, just simple and works well. The Hive S tank, on the other hand, is not something I plan on using again after my review, probably save it to gift to someone with better baby beast compatible coils. On second thought I have better sub-ohm tanks to gift so the Hive S might just get thrown out, 3ml max juice capacity sucks.

Heavens Gifts has the Artery Baton Kit with Hive S Tank for sale at $49.60 but at that price, I would not buy it. I do not see the Baton mod sold separately, that is a shame, if it was in the $30 to $35 range I would definitely consider buying it as a beater mod, love single 21700 mods for around town and the Baton works well. I am going to hold onto the Baton mod and use it for those times when I don’t want to bring my more expensive mods with me, if I lost or damaged those I would be pissed. Not that I would want to lose or damage the Baton but at least it would not be as expensive to replace.

You can find the kit here: https://www.heavengifts.com/product/Artery-Baton-Kit.html and Heavens Gifts are known to run sales often, I doubt you would be unhappy with the Baton mod. You might be happy with the Hive S as well, just on another mod at about 45 watts max.

Nice review and indeed a shame they don’t sell the mod separately. I would definitely buy it. It looks a bit like the Nunchaku but with 21700 battery, as I wished the Nunchaku had.
I use a heatsink for those annoying little gaps

Thanks for your informative review @mjag

Thanks for a good read.

Thanks Josephine! Hopefully, they release the Baton separately at a great price. There is always Artery’s sister company Ehpro that makes the Mod 101 Pro, that sells separately, I had one and really liked it until a friend decided to drop it on concrete when checking it out. Still worked but the road rash on it I said bah, just keep it. Now I am smart and when he asks “let me check out that vape gear bro” it’s nope unless it is over carpet

The Mod 101 Pro is about 25mm taller than the Baton though, heavier too if I remember right. You do get a normal VW and TC mod with the Mod 101 Pro with 21700 capability, I think I have convinced myself to buy another Mod 101 Pro…damn

Never bought a Nunchaku as single 18650 mods get retired quick for me, single 21700 mods are the only single battery mods I will use now besides a couple single 26650 mods I still have.

@SessionDrummer thanks brother! For a simple mod it just gets the job done.

Thank you @Sevencasper and my doll @Letitia

Great review once again. You try any RDAs on it?

Thank you brother and yes Sir, when comparing it to my hybrid mech I used the TM24 Pro with a dual coil build and a Drop with a single coil. Works well but you can tell the hybrid had a little more punch.

Thank you for the review. You covered all the bases and then some. I liked that you explained your ritual for preparing the mod while swigging some beers. It gave me a sense of um…normalcy lol!

Thanks for checking it out

Thanks @TorturedZen…ahhhhhh beer and football, 1 game left and it is over for another 6 months…the football that is, not the beer lol

Thanks for the review, I love it when a reviewer gives me all the information I need. I would have assumed the mesh coil for this would have been pretty much the exact same as the one for the baby beast, now that I know it has more air flow I know which one to get.

Glad I could provide some info you were looking for.

The Artery Baton Kit is a compact pen-style semi-mechanical kit. It can work with single 21700/20700/18650 battery with all round protections. And the Hive S tank comes with unique mesh coils, which can bring rich flavor to you.

That’s a deal right there, thanks so much for posting it

I thought so too, got one on order now.

And it has been shipped, that’s fast. Lets see how long it takes before it’s delivered.
Shipping is free over $20.

Thanks for another great review brother.