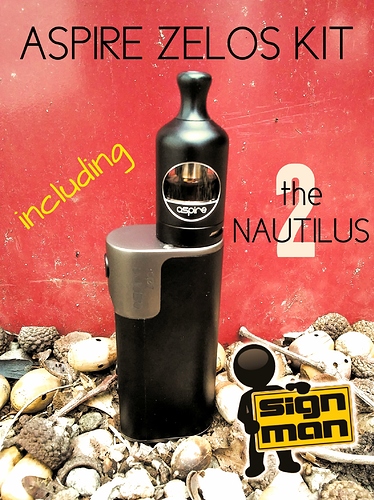 Aspire is known for making functional products that satisfy. The Nautilus line of tanks are ancient in the vape world yet are still selling like crazy. True MTL legends. The Nautilus X was in a totally different category IMO and didn’t keep the spirit of the originals. It seemed like there would be nothing better than the old Nautilus tanks…until now. I am happy to bring you the Nautilus 2 and the mod built for it, the Zelos 50watt. I won this in a contest a while back…and couldn’t have been more excited! I vigorously ran it through it’s paces and now it’s a permanent member in the daily rotation. Let’s dig in and find out why I cant leave home without this jewel. *** A big, huge thanks to Aspire for making this review possible!*** 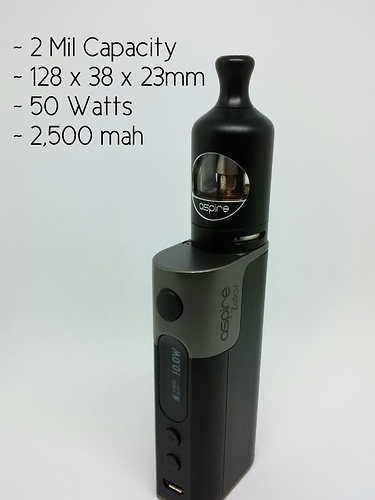 0330172243_HDR.jpg1475×1966 401 KB
I want to start with the star of the show, the Nautilus 2. It’s very sleek and silky, with a nice pebble texture on the main color. Aspire went back to basics, back to what worked on the first 2 tanks and made it better. I can’t lie…it’s the bomb. You can use the same BVC coils that we all love (1.6 & 1.8 Ω) and they’ve added in a new coil that’s 0.7 Ω (18 - 23 watts recommended). The new coil looks exactly like the other BVC’s; Appears to be the same inner diameter of coil as well, but the 0.7’s have way more airflow. You can totally tell the difference. They also color coded this coil with an orange o-ring so it’s easy to tell them apart 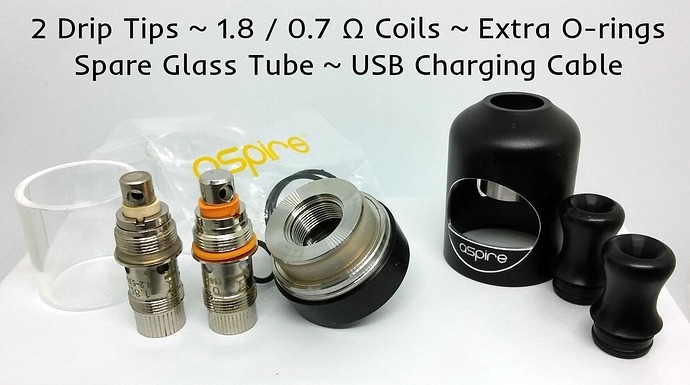 0412172007a_HDR.jpg1767×986 393 KB
The tank is 22mm, so you don’t have to worry about overhang on most mods. Juice cap is 2 mils and it’s TPD compliant. The aluminum top cap/barrel section is something new to me. It’s basically one piece that protects the glass tank (which is brilliant as hell and not used enough), you have to remove the whole thing to fill your juice, and obviously it’s a top cap that seals the tank and holds it all together. Also, there are 2, easy to see, dime sized windows for checking how much juice is left, and the engravings around them aren’t to shabby either. 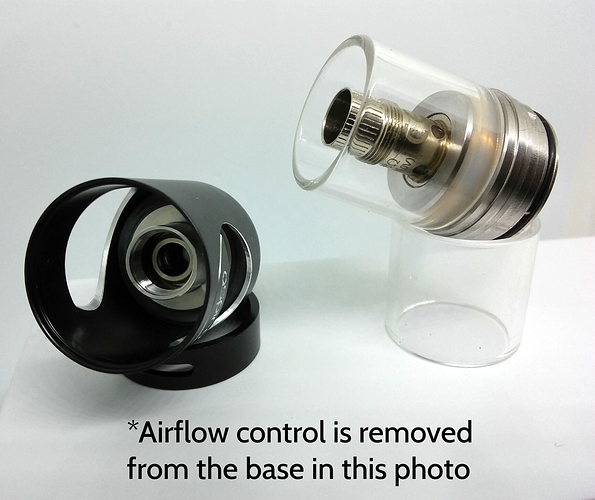 0412172014a_HDR.jpg1727×1450 473 KB
I freaking love the drip tip you get with this tank. It’s probably the best tip on any mtl device around. Lips fit right into place and it’s made of delrin so it stays nice and clean with no lip gunk build-up…and I hate lip gunk… and that it’s even a real thing. I have some cool ass metal tips that I never use anymore for that single reason. 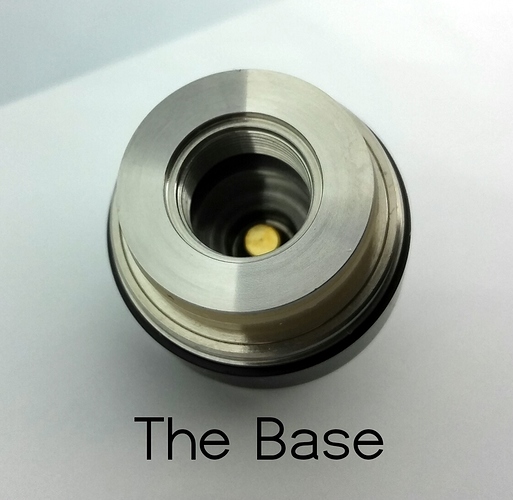 0412172008_HDR.jpg1119×1089 232 KB
Moving on down, the airflow control is made up of 5 airholes that increase in size. You dont get to pick which size you want like you do on the originals. Instead, you turn the airflow control to reveal more air holes. You can have 1 open and get a downright amazing mtl draw, all 5 open for a restricted lung hit, and everything in between for fine tuning. In my opinion, you get a great mtl with 2 holes open or less, even though the airflow is pretty tight when full open. It’s smooth as hell in all settings. The airflow control ring comes off for easy cleaning but stays in place nice and snugg thanks to an o-ring. You can adjust the airflow from closed to open while attached to a mod due to it opening clockwise. If you try and close it back down you’ll just unscrew it from the mod. Thats a little irritating but it doesn’t bother me too much because it would take away from the look. 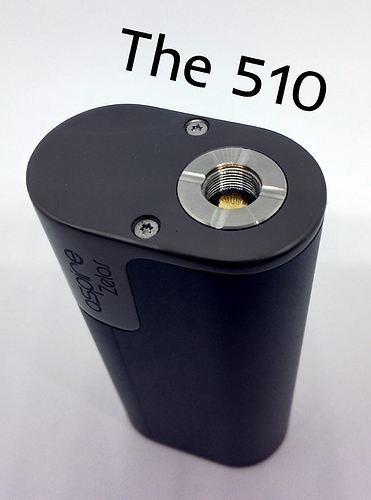 0330172244_HDR.jpg1193×1606 329 KB
The base of the tank is a large flat disk with a hole to screw your coil in dead center, which leads me to the bad stuff… and I hate that there is anything bad to say. You can not change your coil with juice in your tank. That’s why top fill tanks usually have a separate cap for filling and such. That’s the only con with this whole setup…mod n’ all. I made the mistake of not screwing the coil all the way down tight to the base. You really gotta make sure its very tight, believe me… The top cap screws down into the top of the coil. When I went to add more juice, the coil came out attached to the top cap! Juice started to flood the air chamber thats under where the coil sits and I got juice all over me lol. Since then I haven’t had a single problem. I just have to empy the tank if the coil burns out… which burns me out. One thing I like though, the wick channels in the coil sit at the same level as the deck so you can literally vape it dry. 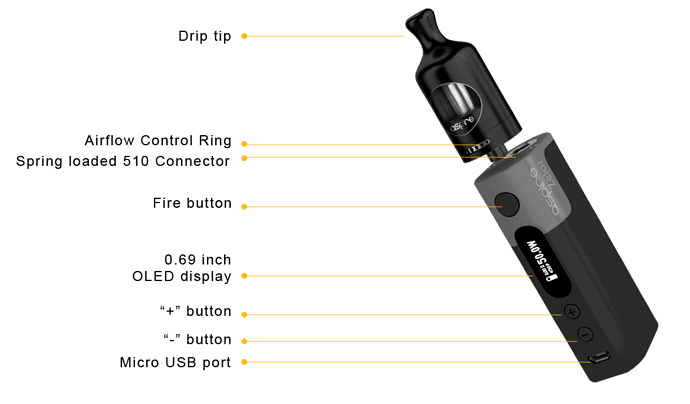 4.png1170×686 134 KB
Now on to the Zelos 50w mod. Its nothing fancy. Aspire claims it does accurate TC on nickel, titanium and stainless. You get VW of course, and surprisingly you get variable voltage and a bypass mode. I love mods with bypass modes btw. The Zelos is very ergonomic to hold and is very light weight. It fits inside the palm of my hand easily. All the buttons are super clicky and I can’t hear any rattle when I shake the shit out of it. It’s two toned with the main color being the exact same as the included tank, right down to the pebble texture I mentioned earlier. The second color appears to be painted with the engraving showing the raw material beneath. If your hands are dry this thing is damn slick! I’ve dropped it once already and about died!

The watts and volts are adjusted in
0.1 increments and when you press
and hold the button it scrolls
lightning fast. Operation of the
menu screens couldn’t be more
simple. Clicking the fire button 5
times fast locks the device…holding
the fire button when locked turns it
off completely. Hold the + and fire
buttons to lock the adjustment keys.
Hold + and - keys to enter the menu
screen. When in TC mode, press the 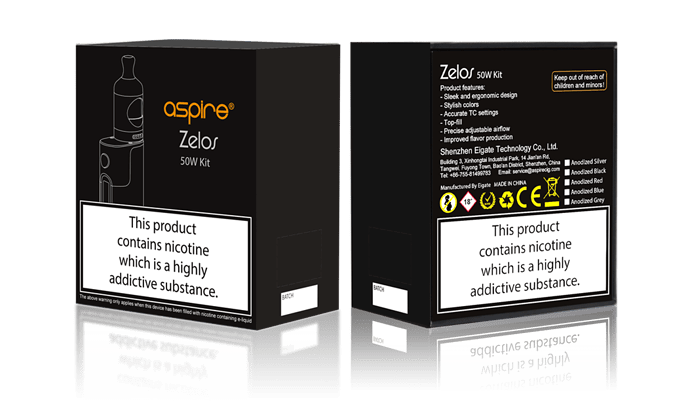 This mod wasn’t made to fire super sub-ohm builds, or vaporize juice at 180watts. The Zelos and Nautilus 2 were made for MTL lovers…and it would be difficult to outperform this kit for that purpose. I highly recommend this kit if you love a high nic, throat punch MTL vape. 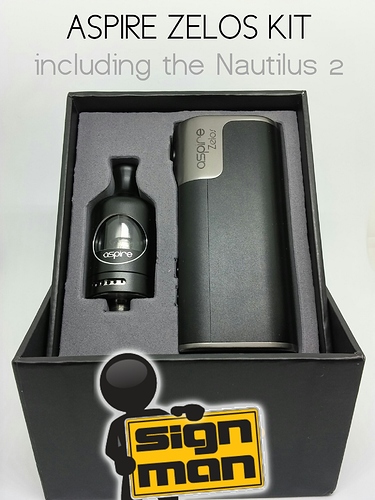 0412172022_HDR.jpg1475×1966 590 KB
You can find the Zelos kit here: http://www.aspirecig.com/aspire-kits/aspire-kits417.html
Check out Aspirecig.com for other great products! See you on the next one and thank you for reading! Now…did you think I was ever gonna shut up?

Great review and it does look really good too. Would actually consider having one as an “Extra” if there is such a thing,lol. Again, great job.

Thank you! This is definitely worth having, especially the nautilus 2. It’s really surprising at how better the flavor and airflow is over past tanks. Did it completely replace my nautilus mini? Nope! But as you said…nothing wrong with having an extra lol.

I have heard that the triton mini coils work in the nautilus tanks…not tried it myself though so I need to do more research to find out 100%. If it turns out that they work I’ll update the thread. Thanks for reading and for the reminder!

Excellent review! Thanks for taking the time to,do so.

Kind words as always from @TheTinMan1! Thanks brother I appreciate you

Cool so that gives this tank loads of options. Are the triton coils any good?

I need some help! There’s a paragraph above the packaging photo that went crazy. It has a different font and tip read it you have to scroll left to right. It’s there a way to fix this?

Looks like you have to manually break the lines into lines that are better in length.

1.8 Ω Clapton? Now that sounds amazing! I gotta get some of those. Thanks for the info man

That worked man! I knew I could count on someone here to solve that puzzle

Thank you very much! I appreciate the read