Banning of e-cigarettes in HK 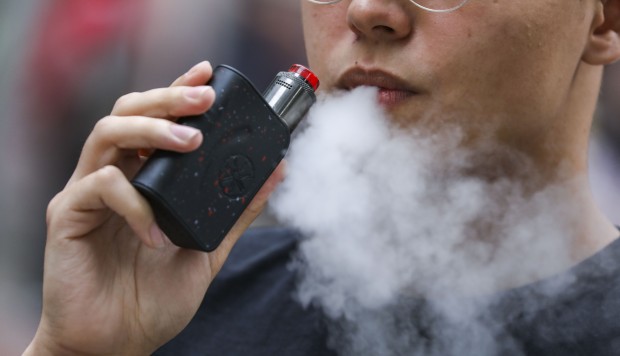 Business is brisk for wholesalers, manufacturers and retailers of vaping products, but it could all come crashing down as officials signal e-cigarettes may be outlawed

Hong Kong is parroting the old line against vaping.
“if Hong Kong leader Carrie Lam Cheng Yuet-ngor goes ahead with her proposal to ban the import, manufacture, sale, distribution and advertisement of e-cigarettes as well as other new smoking alternatives.”
Something is not right in Hong Kong.
Some of the good about vaping:
https://www.cancer.org/healthy/stay-away-from-tobacco/e-cigarette-position-statement.html http://www.bbc.com/news/uk-scotland-41333537 https://vaping.com/blog/news/vaping-is-the-reason-for-massive-decline-in-uk-smoking/ http://www.stuff.co.nz/national/politics/90962129/government-legalises-ecigarettes-in-effort-to-make-new-zealand-smokefree-by-2025 http://blog.mtbakervapor.com/new-cdc-study/?utm_source=newsletter&utm_medium=email

Big tobacco is buying out politicians. I don’t see any other reason why they would target vaping and do nothing about tobacco.

Maybe in Hong Kong one person can control the laws. Big tobacco is certainly involved.

Big tobacco is buying out politicians. I don’t see any other reason why they would target vaping and do nothing about tobacco.

Maybe in Hong Kong one person can control the laws. Big tobacco is certainly involved.

China or anywhere for that matter…

My Opinion is Hollywood from the early 50’s has put cigarettes in a socially acceptable light, even Glamorizing it very early on - on the big screen. I believe the more Hollywood puts vaping into their productions the more peoples views and acceptance will grow.

I think people need to look at why they think it’s a big tobacco or government conspiracy. I know some anti-government people and activist will jump on ANY CAUSE to promote their views and lash out. People with authority issues I feel might have some deeper Mother/Father issues at the heart of their anger.

But even more so… people do like drama and conspiracies theories to keep their mind entertained or blame someone else for their not so fairy-tale life that they hoped for.

Facts and Beliefs are not even close to being the same thing.

I’m not stating it as fact, just my opinion…
If it’s for health reasons, I keep wondering why tobacco is still freely available and why they don’t urgently do something about their air quality. Just banning effective cessation products doesn’t leave much else to the imagination.

I can only guess cigarettes have been in place for such a long time, socially acceptable but vaping is a newer big Fad that they probably have no idea what do really do, or how to do it in a efficient and effective way yet. So they just drop a ban on it.

I whole heartily agree and hope they don’t just end up lumping it in with cigarettes in the long run but find a proper place for it as a effective cessation product, readily available along with the products to DIY.

Just trying to keep it positive for everyone even lawmakers who need to understand it better for our sake!

Sorry If it came across as being critical of you guys. didn’t mean to be. Only wanted to open some eyes to possible pitfalls. If ppl start pointing fingers and sending heated spirited letters, because of stuff they read on the internet and their bent of character, accusing the people who can help. It might may turn it the wrong way.

Im 100% guilty of this also below. But once I let it go, a whole new understanding came into view.

Nothing to forgive man, this is a place where people can express their opinion and you can be critical of opinions if you like. Not everyone has to have the same idea and differences can open your eyes to possibilities you may not have thought about, I can appreciate a different point of view