I use a couple from this company http://charger.nitecore.com/
the iSeries and dSeries are nice. Safe. You can read up on the features.

yeah mine shows the charge level of each cell which is very nice… it apparently stops charging them when they are full but I dont trust it so i unplug it anyway. yeah 6 bay would be even better I just wonder if it would charge slower since im one of those people that puts off charging until im on my last charged battery lol

I dont trust it so i unplug it anyway

are you unplugging the actual charger? you can just take the batteries out when done

Are there chargers that turn off when the batteries are charged

Just in case, never leave batteries in the charger overnight. Even the charger “stops” the current when full…you never know.

Speaking as a technician, there’s only two brands that I will consider as safe viable, reliable devices.
Xtar and Opus.

Both are very well built and highly regulated, and have been tested (with supporting videos, and proper test equipment) on YouTube.

The biggest difference (obvious to the laymen anyways) is that the better of the Opus options incorporates temperature monitoring as well as a fan that only kicks in once certain components get above their set range for temp.

The Xtar VC4 is probably the best all around value, but for maximum options (and in my opinion, added value safety features) the Cadillac would be the Opus BT-3400.

I’m in the same boat as you here… I just haven’t decided my price point is all. lol

display and abilities are much more in depth and technical on the Opus however, so you can easily guess my automatic tendency.

I’m looking at the Efest LUC Blu6 and LUC V6 chargers right now, both are 6 bay and have phone apps… Lol not sure I need a battery charger app, but it’s a cool idea.

Great review and technical assessment of the “cheaper model” - the 3400 just has a few bells and whistles mainly. Still the same rock solid foundation though.
There’s a better one for the Xtar, but I know I’ve watched this one too.

Just checked that out, looks pretty sweet. There’s a 3100, too, and I can’t tell the difference, maybe the 3400 just the newest model? I’ll have to look into that, it’s a bit cheaper.

The video above should be for the 3100, but I prefer the 3400 for some added protections (primarily the thermally activated fan) but also a bit nicer lcd IIRC. As most know, heat is the the quickest killer of most electronics.

I chose the XTAR VC4 above because it displays MaH. Here’s a great price thanks to @Whiterose0818 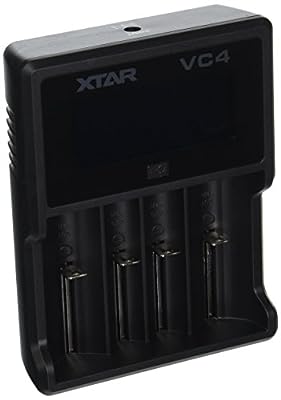 The XTAR VC4 charger is a combination of our XP4C and VC2 charger! This intelligent charger can recognize, charge, and display charging current, battery voltage, and charge capacity of both Ni-MH and ...

I’m pretty sure both of the Opus units mentioned above do as well… But the price on the VC4 is what’s got me really going "do I need all the extra? Lol

But I’m torn because usually the old adage of" you get what pay for" rings true IME as a tech (not just as a consumer). There’s always exceptions though, and it’s usually the skeptic in me that I end up fighting with.

you get what pay for

That’s my motto. I paid a little more from Illumn.com and got a brand new item in a sealed box. Works great and is very entertaining to watch your batteries charge (nerd alert!)

We had a couple 2-bays chargers years ago. Bought a 4-bay as primary and shuttled the 2-bays to work and home office. Bought another 4-bay for the home office and the 2-bay went into the car. Bought another 4-bay for flashlight batteries. All the 4-bays where the Nitecores, the i4 and similar. Started running dual-18650 mods, and bought a 6-bay, the eFest Blu which can be controlled/displayed via smartphone app. I think we have 18 or 20 slots at home now…

Similarly, we’re now running two 7-port USB chargers and a 10-port for the phones, tablets, and the numerous mods with built-in batteries.

More than anything you dont want a charger that trickle charges your batteries if you leave them on there after they are done charging. Also its nice to be able to charge other chemistry / size cells, like Nicad.

You would be safe with a Nitecore i2 , i4 , D2 , or D4 and I would not suggest anything LESS than these.
They are inexpensive on Amazon [if you shop them]

Never have I had the batteries or the chargers even get warm.

I don’t have a device that requires more than 3 batteries to run it, and I always marry batteries, so I don’t need to have a charger with more than 3 bays, so the 4 bay is fine. I also have enough spare batteries that are waiting in the wings to use. If I need to charge any others during the several hours it takes to charge what is charging, I have an additional charger to begin on them.

Of course there are more sophisticated chargers, for more $$$, but personally I don’t see the need for 18650’s and similar. The couple of chargers that are top of the line really are no safer, some may charge a bit faster, but sometimes faster also means more heat.
I think a Nitecore D2 or D4 is safely efficient for what our use is, and my recommendation.

I have the Blu6 and like it a lot. Be aware that the maximum it can charge is 4 amps. so if you have 6 batteries thats two at 1 amp and 4 at .5 amp. The app for iPhone is horrible not worth including as a consideration. I’ve been happy with the purchase, but if I were doing it again, I’d probably buy either 2 of the XTAR VC4s or 2 of the LUC4 chargers. Both I believe can charge all batteries at full 1 amp current.

Thank you for this reminder!!

That’s one of the other MAJOR reasons that I wanted the BT-3400 for…all 4 slots will do a 1a charge (If needed/wanted).

Unfortunately, this is not the case for the VC4…

Intelligently identify a battery’s input power and automatically adjust suitable charging method and charging current from 0.1A to 1.0A and up to 0.5A4 / 1.0A2 max.

Wish it did though!