Sounds like more risk than it’s worth. Battery wrappers are cheap and relatively easy to put on. That’s the safer option and when it comes to batteries, safety is paramount. On top of that, electrical tape is kinda thick and might prevent battery enclosures from closing the way they should. Just my 0.02 of course.

I’ve done it in an emergency but wraps are dirt cheap so you should always have some on hand. 10 for a dollar and only a dollar shipping. Better safe than sorry… http://battwrap.com/

I’m with @JoJo on this one. It only takes it to touch once and

Why risk it?
Safety is paramount here, the last thing we need is bad publicity because someone had an accident.
Battery wraps cost pennies, are easy to apply so why take a chance?

I understand why you were asking and i gave my opinion. It’s up to you to decide if it’s safe for you or not. But please be safe.

In a pinch you can use a piece of electrical tape to temporarily cover a small pin hole but like @Pattie said why risk it. Get some wraps ordered

If it’s between a hole in your wrap or electrical tape I’d go with the tape. If you don’t have another battery and can’t get ahold of one or a wrap, I think tape would work as a temporary fix while you wait for batteries or wraps to arrive.

Warning* this is not advice from a professional and following above advice is done at your own risk with the poster (ie ME) claiming NO liability in the event of adverse reactions.

Could you possibly post a pic of the damage?

[quote=“JoJo, post:9, topic:78725”]
Warning* this is not advice from a professional and following above advice is done at your own risk with the poster (ie ME) claiming NO liability in the event of adverse reactions.

@cremeanddessertvaper Be sure and pick up some Battery Terminal Protectors when you grab some wraps. They’re available from the same site as the wraps and are also dirt cheap. It literally takes 5 minutes or less to rewrap a battery. Like the old saying goes 'better safe than sorry". 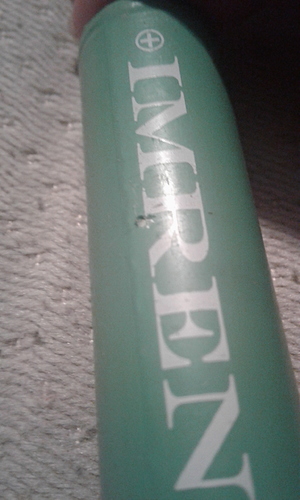 Yes that would be fine to patch. You said in your question about rewraps, thats why I answered as i did. Now that i see the damage, then yes it looks ok to use a patch. But i would still suggest getting yourself some wraps and that way your covered.

Thats true and you have the satisfaction that you did it yourself.

These are only $0.15 and are good and thick
http://www.kidneypuncher.com/18650-battery-wraps-assorted-colors/