Battery Safety! Its been a while, so

Many have come on-board since our last discussion about battery safety so I thought it was about time for a reminder …or a refresher …or an introduction. This guy covers it all very well …in his own “unique” style …lol!

I suppose speed doesnt kill quite like it used to?

uh oh…is this the guy from the other post? Speedy Gonzalez…I can’t watch…

There is a lot of solid info in this behind all that character. I laughed a lot more than I expected I would.

There is a lot of solid info in this behind all that character.

I’m glad you got beyond the character …I hope others do to. It’s important information!
Yeah, it’s bit ‘rough around the edges’ …but hey…its memorable! Hopefully, the info will be un-forgetable.

I learned a couple of things, but that’s only cuz IDGAF about sub-ohming with mechs (TC-4-LYF

) so the stuff at the tail end was stuff I’ve never felt the need to look into. But every other thing he said was 100% correct and would make the average vaping (or high-power-flashlighting) noob a lot less likely to do something stupid (I wonder why we never hear about the flashlight guys blowing stuff up?).

ok…I am going in…

edit I stand completely corrected, and apologize for my ignorance on other forums threads. This dickhead is one smart fucker. The fact that he is taking his time to share safety information, tells me he is a good dude. I actually learned quite a bit from what he was saying, and the random “is this safe” thoughts have been dispelled for the most part. As I have gotten into RDA’s or mechanical mods yet, I know I am gtg so long as I don’t do anything stupid.

Thanks for the video, ya fucker.

Well I had to bring this back up because I work at a major computer chip manufacturing company
and last week of all people a ELECTRICIAN put some 18650 batteries in his back pocket without a case forgot they were there than put a screwdriver in his back pocket and shorted out the battery and caused a Fire. Burned himself bad and now they want to BAN ALL electronic cigarettes from ALL their sites Worldwide

Wake Up People !!!
Your Batteries should ONLY be in your MOD
or one of these or one of these I just vented two batteries recently. I never thought I would. Here is what happened:

I have a Dimitri mech clone. It has a floating 510. It’s not a hybrid. If you screw in an RDA that has a center pin that protrudes a lot, it will literally push the insulated bottom of the floating 510 down on top one of of the batteries. I would have to post a pic to show why this happens. It’s slightly a design feature. I knew about this, yet I still did something stupid.

Anyway - I got a new RDA and put batteries in the clone - and noticed that the RDA was sitting “too high.” So - with the battery in place, I started screwing the RDA down, and down.

All of a sudden, everything got real hot. I immediately unscrewed the RDA, but things were still getting hotter. I pulled the batteries out of the mod and threw them down on the floor.

Both had partially melted their wraps and one was bulging.

The switch portion of the mod was somewhat melted.

So - I guess the lesson is “don’t screw batteries in too tight, even indirectly.”

That sucks do you think it is because it’s a clone ?

clone or not, i wouldnt blame that on what happened which is actually user error. He knows he did wrong. A lot of mechs use a floating pin that can be unscewed or pushed completely out this may be safer then a hybrid where your atty’s 510 is too short but not safer if u crank it so tight that u crush a batts pos. cap. If u want a flush fitting atty on that consider using plastic washers between the atty and the box. They will take up that lil gap, make it safer from twisting/breaking and wont allow u to overtighten. I use these 'mod protectors" a lot on all my mechs. Always happy to share any knowledge i have on the subject and since the word mech puts a pic of a bomb in peps heads, u can PM me.
Edit: sry @Rob62 initial response to u was 'no" but i got to rambling a bit.

It was pure user error. If I hadn’t screwed the RDA down on top of an already tight battery it wouldn’t have happened. This all happened in seconds. For people reading this, please realize how much power these batteries can have. I am very lucky that I was able to pull the batteries out quickly.

Mech mods are just mech mods. I have several, and they are only as dangerous as the user makes them.

This time I was lucky. And I am hoping that other people will be very careful about over tightening batteries. 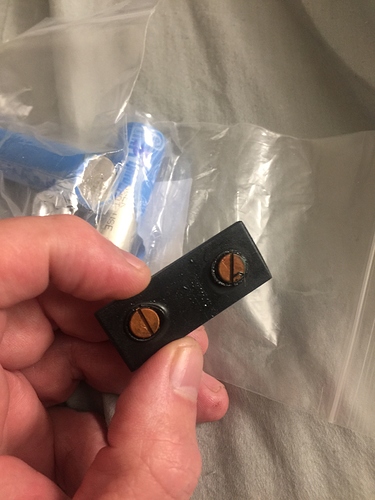