Best Batteries in your opinion

Just wondering on what your guys’ opinion is on these batteries I just found? I didn’t know they made them. I am looking at buying some imren gold 45A 3000mah batteries. I have a tfv8 tank (not the baby) with tfv10 coils on either my Alien or Predator and usually have it set around 150w. Might be a little bit over kill but isn’t that better than pushing the batteries to their max all the time?

Look at the tested rating from mooch 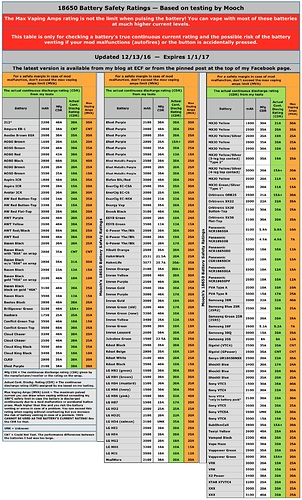 Where in the world are you?

If your UK, Torchy the battery boy on eBay does awesome battery’s

thanks, I was looking for that and couldn’t find it.

Any battery marked up as 45A battery is just a crappy rewrapped shit battery.
If you go for batteries go for the known brands such as Sony, Samsung, LG and so on.
That way you at least get decent batteries.
And those brands are good brands.

45A is way over inflated. I would agree with @Norseman Stick with the known brands.

With the Alien and Predator some Samsung 25R will do you just fine.

I thought Imren was a good name, you see them everywhere…but come to think of it I have 2 different sets of those (not the 45a) and they are crap. I have a set of lg he4’s and those are about the best batteries I have. I was just wanting something better. I have been using those for a while and they are getting weak.

I only vape on mech mods and with an Imren like that in my mod i would probably have blown my face off a long time ago.

Your beard would have protected you. oops - it was all @TheTinMan1

Thats what she said…

You guys high jacked @FogMan77 thread’s with a beard. (A force to be reckoned with, agreed) You should be ashamed of yourselves.

But seriously, the best batteries are the ones that work and don’t explode. I use the efest 2600. Cheap and I have good luck with them.

There are no, none, don’t exist, 45A 3000 mah 18650, did I say they don’t exist? Imren is going to injure people with their over rating of batteries. The higher the Amps the lower the MAH. Buy LG, Sony, or Samsung and be safe, also in a lot of cases they are less expensive.

I thought the beard and long hair was funny…I chuckled. I have long hair and a beard also. Gotta have some humor in the thread to keep you on your feet. lmao

Ok, I am not going to get the imren. I like my lg but they are getting weak so I think im going to get a few more of them.

to add to @woftam info, you can always find Mooch’s data here:

Mooch. 54.679 vind-ik-leuks · 702 personen praten hierover. Working to expose exaggerated battery ratings and give you the real scoop on the batteries we use.

I fit that description as well,lol. Now I have alibi’s if needed since “He had long hair and a Beard” when he grabbed my a******,lmao

just my two cents , i recently bought the Q30 and i think ill go back the the 25r im no expert when it comes to reading charts and stuff but the Q30 seems to die quicker than the 25r