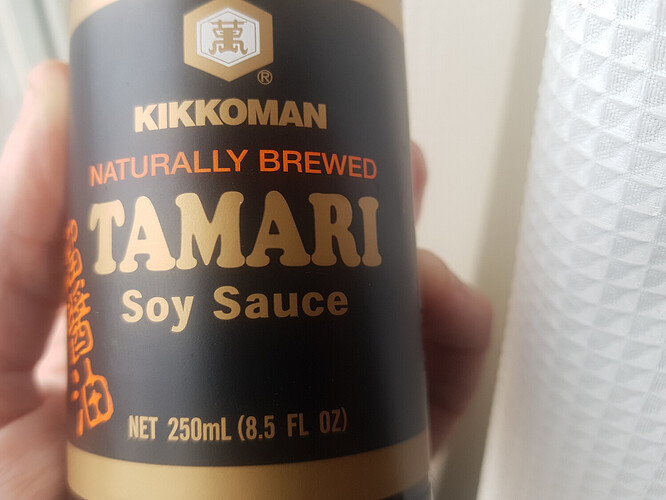 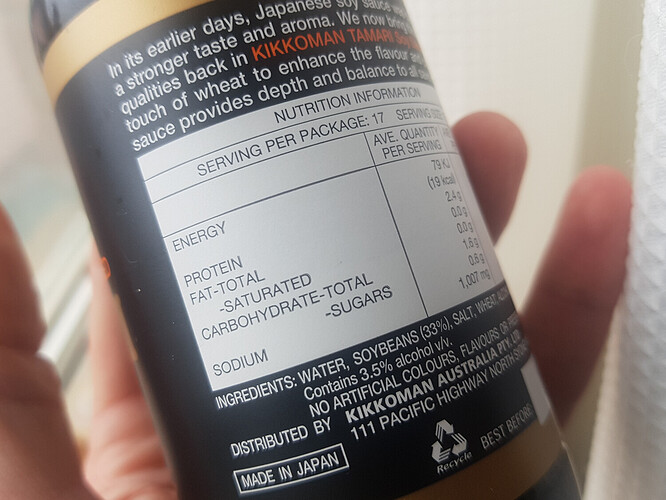 I’ve been into noodles lately because they’re so quick and easy, plus they’re the kind of food you can just shovel down your throat and not feel nauseous afterwards since they’re not full of fat or cream or rich sauces etcetera, yet there’s always plenty of flavour and the sesame oil soy sauce together hit every range your tastebuds need to feel like they’re getting heaps of calories.

And yeah I have never given much thought to soy sauce and I’m no connoisseur, but this stuff is the best supermarket soy I’ve found so far.

At Woolies for fellow Australians, but made in Japan so it’s probably available in the states supermarkets too.

I actually think it would be excellent in a few bether dishes too - like spaghetti bolognese, which sounds like a nope but if you added just as much of the soy as you’d normally add in salt, it would be not strong enough to discern as soy but the saltiness of the soy with the wheat would add just a little more richness to a bolognese sauce.

I love tamari. It tastes so much better than plan soy sauce. Its a bit more salty… However, i use it in all of my stir-fry dishes.

Yeah, salty and … thick/rich… it’s not even like it’s $20/bottle either - only a dollar or two more than the more common brand soy sauces that I see when I’m eyeballing the shelves.

And truly: with that and sesame seed oil the two create a flavour base you can just add whatever you like to.

Im not sure. I havent used that brand…
I use this one.
https://thrivemarket.com/p/thrive-market-organic-gluten-free-tamari-sauce?utm_source=google&utm_medium=pla_smart&utm_campaign=Shopping_Engagement_Smart_Members&utm_content=671635706638&utm_term=na&gclid=CjwKCAiAyc2BBhAaEiwA44-wWxKzaEnokfGH1CIwP2feJO-9vL3iQBuBM4BCM2ZQRapaur_Lcc_W9BoCH84QAvD_BwE

I thought Tamari was just that specific brand

Yes its the gluten free version.

Kikkoman is the brand, it is fairly common better side of the quality spectrum soy sauce that can be found pretty much anywhere that has Japanese stuff on sale. It is the standard one with sushi everywhere I have been ( the standard red cap one, not the tamari one which is somewhat harder to find) 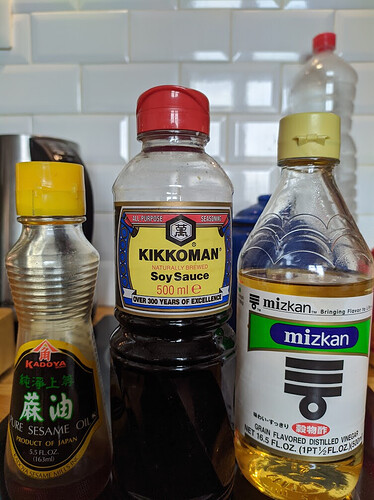 Ahh, see I almost had it figured out already pairing the sesame seed oil and soy sauce without even knowing!

Just by how well those two go together mm.

That type of kikkoman is the type I’ve always seen in supermarkets but in a smaller more circular glass bottle and I knew the brand was better than the cheaper junk surrounding it, but then I saw this brewed version is just that much smoother for some reason.

…i’ve got apple cider vinegar in the cupboard, but I’m betting ACV is much harsher aand more acidic than that japanese one in the photo.

I’ll look for it tomorrow when I’m shopping

I didn’t know that. How about a recipe? If it’s not to much trouble that is. Really I just need the ratio of the sauces.

Though it’s easy to OVER soy and end up with way too much salt so little sprinkles, stir-in, taste, add a little more… just until you get the general idea how much you want.

Once you know how much is the right amount, you just shake it on in one go.

I’ve only discovered how well they pair by accident cooking noodles.

The vinegar I haven’t tried, though I’ll get a bottle tomorrow and start using that too.

I’m assuming the vinegar meshes well with tje soy just by balancing the saltiness, and that only a TINY amount would be needed

Boil noodles, strain, dump them im the pan and start frying the fuckers up

I reckon overall, 3:2:1 parts oil:soy:vinegar would be a good ratio - I’ve currently settled on around 3 parts oil to the 2 of soy… turning ordinary shitty instant noodles into these… 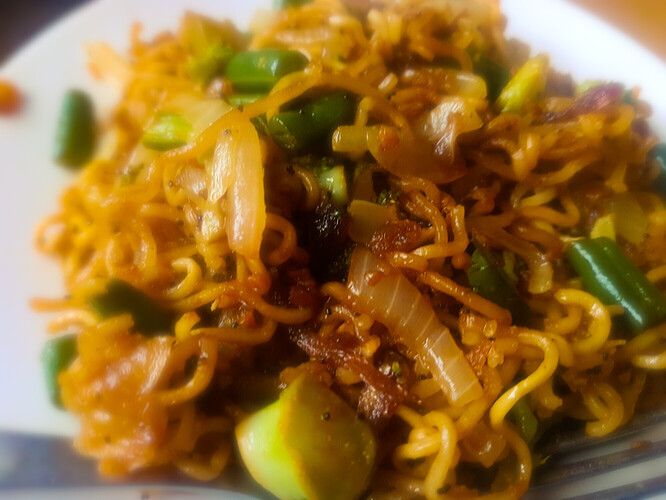 You can add whatever you like to them though: it’s very casual cooking

Yeah I’ve gotta up my game to different types of noodles and more variety in the veges but that wouldn’t change the way they get cooked: just stir-fried in oil with soy instead of salt

Oh and a healthy pinch of Chinese 5 spice, maybe a bit of that stir fry paste or sauce you get for a feint overall flavour, chopped garlic and onion - all that

I’d go for a 2 teaspoon soy, 1 vinegar, 3 drops of sesame oil for 100g of dried rice ( cooked). You can go much higher depending on taste, but you should taste it and it should avoid the soy covering everything. I don’t tend to mesure as it is very forgiving within reason.
In practice, I like to add soy and vinegar to dissolve caramelised remains if frying, so adding this before adding any water heavy ingredients ( say after onions and meat, for example, but before cabbage or mushrooms).
Just try, better starting low. And really low with the sesame, a couple drops go a long way.
If you want Japanese sushi rice, it is salt sugar and the vinegar above. Can’t remember the exact proportions on top of my head.
The Japanese vinegar is a bit too soft for Chinese stir fry, I would go for a neutral vinegar, maybe malt or cider in smaller quantities.

It is pretty good all round, so if like me you only keep one, it is a good choice. It does not have the very strong near mushrooms taste of some of the darker ones or weird off after taste like the Maggi one.
I can get it from 100ml to 10l bottles in my neighborhood. There might be oil style barrels of the stuff somewhere if I asked :).

What’s making me curious is why these companies are not selling Non-GMO sign on their products.

I checked this first since it’s about soya (large majority of world’s soya production is GMO) and this IS a non-GMO product, but it’s not advertised like one. I have zero doubts that would be beneficial to add, it’s good from marketing perspective, it justifies higher price, it’s beneficial for the company’s image and their care about you, it makes their product superior to the competition. The only logical explanation i could find is that company is producing many other products that are not gmo free and doesn’t want you to pay attention on this. Or am i missing something? Why non-gmo is not advertised?

GMO is a non issue in Europe. Nobody wants to buy them ( direct human consumption, as animal feed people care less ) and few farmers want to plant them.
I am not even sure that there is a single authorised crop left in EU except for experimental crops.
Pretty much third world and US at the moment.

As we are into ingredients you should have, smoked paprika is a good one. Carvi seeds if you like aniseed in savoury food, and harissa for a nice chilli paste.

Kikkoman”s makes the best soy sauce. I grew up with a friend from Soul Korea and her mom used this always. It can in a container that I can only describe as a gasoline can. Lol. It was a large quantity.

(and glutamate if this is your thing)

that has been known to cause Chinese Restaurant Syndrome, something I am surely inflicted with

Am I right to assume the vinegar is essentially there to counter the salt and oil?

MSG isn’t really either my thing OR adv objectionable thing to me, though I haven’t found these improvised noodle dishes lacking in flavour enough to need any.

Though I also don’t look at it as an evil additive and genetically modified foods don’t bother me either.

It’s easy to rally against anything that’s not 100% organic hippie heirloom grown when you’re some rich arsehole living in the first world getting chubby off a soft and cushy existence, but if such people lived in places where starvation was a daily reality they’d probably be less prissy about it.

These are also priceless for stir-frying a noodle dinner, I’ve found @Dan_the_Man and @whoever else - dried and packed with fat no doubt, but excellent… 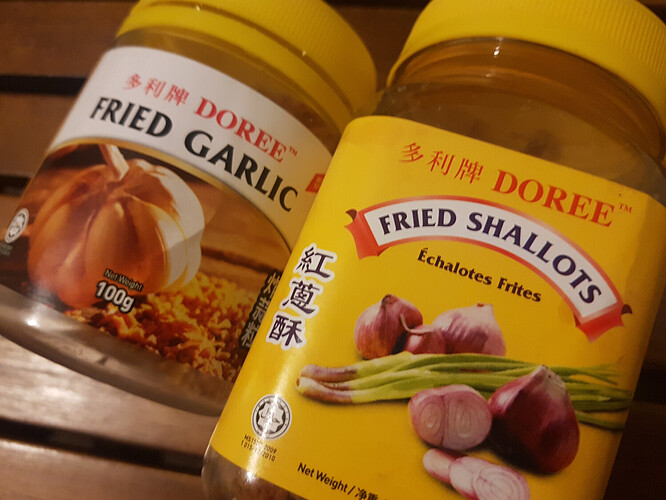 They add a smooth version of fresh garlic and onion and another texture to the pan.

They’re also cheap as shit and last forever in the cupboard, so even before I add any veges or meat or fresh garlic or spices I shake a good half cup of each in which also helps absorb any water deepl on the noodles after straining.