Best wire for a warmer vape

Now a have a single battery mod and want to run at around 50 watts. I’ve picked up some nichrome clapton wire and it ohms out at .30 with 5 wraps. It works OK at 50 watts and produces vapor, but it’s not very warm or thick vapor. Wanted to get some of you inputs on a good warm vapor producing build at 60 watts and lower.

I currently have a mindset that lower ohms = warmer and more vapor, but also needs more power.

I’m trying to adapt into higher ohm ratings and get similar results. Not sure if it’s even possible, but I’m sure someone knows more than me about all of that.

Resistance plays less of a role than mass. Two coils with the same resistance but different size will require different wattage to perform best. Clapton coils have a lot of mass and require more power. What is the core size and wrap size of your clapton? Most single core claptons are 24-26g core + 32-34g wrap. If you want to use claptons at low wattage I would suggest using high gauge wire. 28g core + 38g wrap works very well at lower wattage. Look at the pics below to see the difference in mass and heat flux. 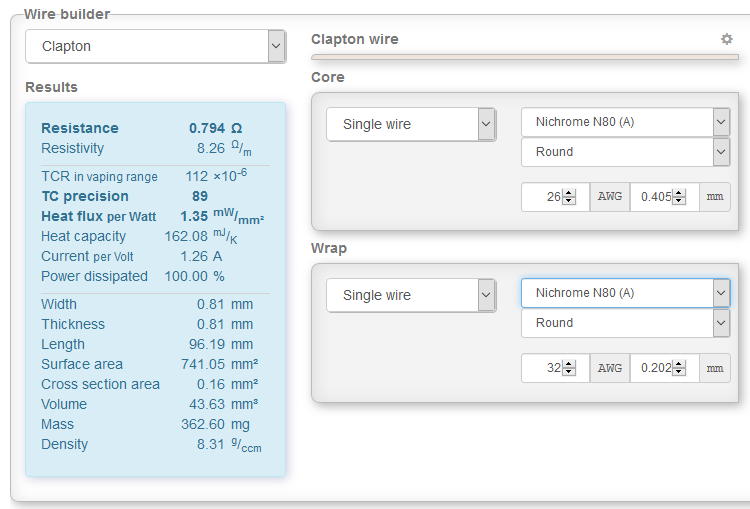 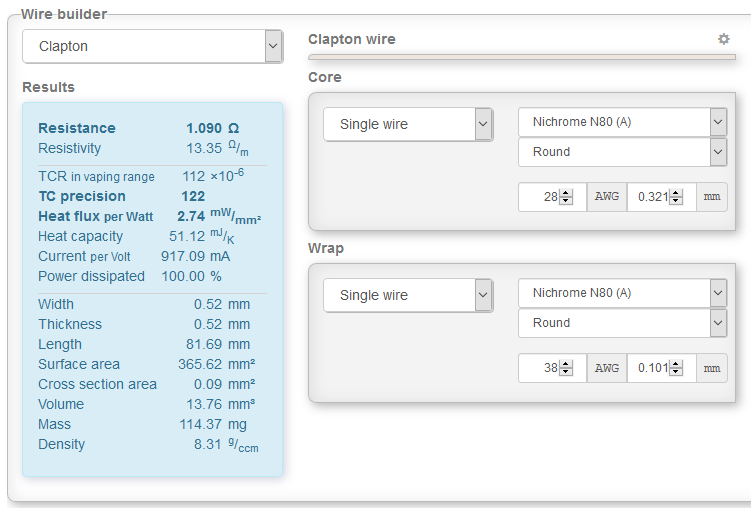 I typically run dual Fused Claptons that end up ohming at .3-.55, but I put higher voltage behind it to get the warm, some would say hot, vape that I like. I prefer this over lower builds due to less stress on my batteries due to the higher ohms and higher voltage. There’s nothing like putting a dual 14 wrap .5 ohm Fused Clapton in a 30mm RDA, @ 11 volts on top of a @Whiterose0818 mod.

very wise, my friend. This is the kind of knowledge that people need.

This clapton wire I have is Nichrome80 Fused Clapton 2-28/36 2.6ohm/ft And it’s a lot smaller than a lot of the clapton builds that I see. Here is a pic. It just doesn’t seem to get warm at all, and if I bump up the wattage it just burns my coil. I definitely see what you’re saying as far as Mass plays more of a roll. 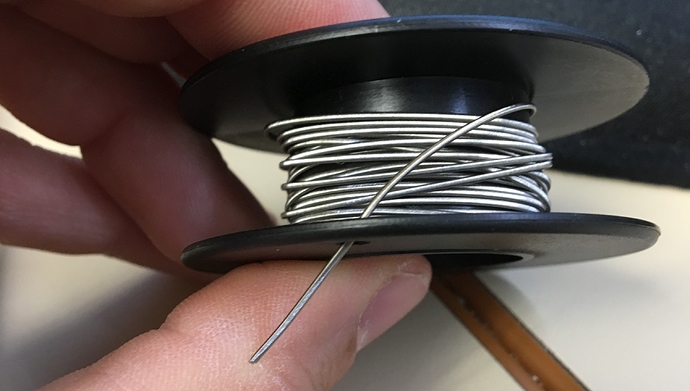 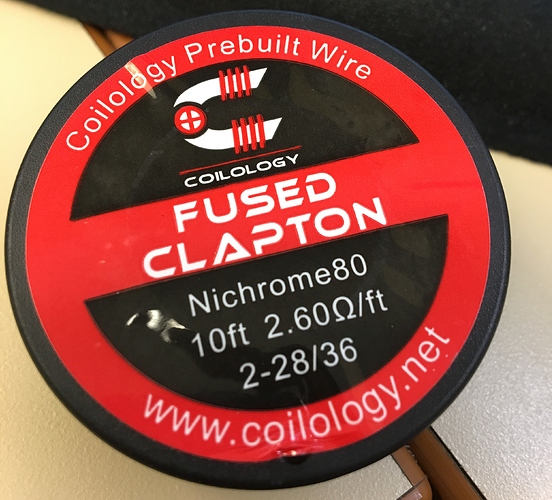 I think you’re better off doing some round wire builds if you want to get a warmer vape at 60 watts or lower. Those Clapton need some power.

Single coil build with Clapton wire at 50-. 60 watts would probably give you some warmth.

If you reduce the size of the coil, i.e. 4 wraps instead of 5 or use a smaller id, then the coil and thereby the vape will get hotter.
Reduce the airflow and your vape should become more dense.
Switch to simple round wire and you loose less power to ramp up and cool down.

However, if you are used to and like the vape produced at 80-90 watts, then there is no way you are going to get the same result at 50-60 watts. The more watts the more vapour you get, and there is no magic wire or simple tricks that can change that.

Edit: Doesn’t mean you can’t get a satisfying vape at 50-60w of course, just that you have to compromise on something.

I took @louiesquared info and instead of making a spaced coil @ 5 wraps I made a contact coil @ 7 wraps. Much more satisfying at 60-65 watts. Thanks sir. It makes perfect sense that more surface area would mean more heat at the wattage I’m running.

Very nice warm and dense vapor production with the before mentioned wire.

@NChris and @Whiterose0818 can you explain the difference in the 11v Lion battery vs the standard 18650/26650 batteries? Obvoiusly a highter voltage rating, but what is the concept behind it, or the benefit?

I plugged those number into a calculator and saw that would be the equivalent of running at 242 watts. Seems like it would just burn up the coil and wick instantly…

I have a mod made by @Whiterose0818. Quite a few people on here have them. You should check out one of the White Rose mod threads.
Anyway, one of the options you have is to have the mod powered by 18650s or Lipos. I have a 3s lipo pack which means, 3 stacked lipos, each puts out 4.2v, which gives you a total of 12.6v on the high end. While having the extra power is great, the biggest pro to me is the fact that I can charge my battery pack in 20 minutes at the most compared to hours for 18650s.

If you build bigger coils, you have more wick, and it doesn’t burn your wick and coils instantly. Not at all.
It’s a different way of vaping. One I really enjoy.

I think I understand what you’re saying

what type of wire and deck are you using that you can fit 14 wraps per coil?

I use 2 different ones. I use a 30mm X1 by Vaperz Cloud that I put dual 14 wrap Fused Claptons in. I also have a 30mm Mason by Vapergate I have quad 16 wrap 24 gauge N80 round wire in. Both rdas have plenty of airflow to be able handle lots bigger builds with out them getting too hot.

Hi @Jooshwa! i recently tried flame wire by deamon killer. Ni80, 2x28ga with 38ga wrap. High resistance, nice warm vape in a kylin rta with dual coil setup, 5 wraps (3mm inner diameter) and play around 40w-60w. I also tried it to a merlin mini rta and an armor mods rda single/dual coil setup. the flavour is top. Give it a try.