So I was curious, if this would be worth using? 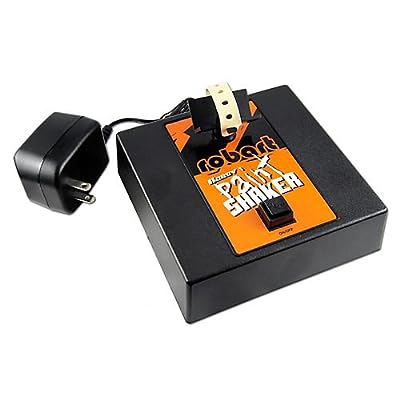 Overview Operating at 5,000 shakes per minute, the 120 volt A/C powered Robart Hobby Paint Shaker perfectly blends paints for smooth application with brush or spray equipment. For use with 1/4 oz. to  ...

I’ve considered the same basic type thing, Where I work we use to deal with with tons of paper, and we had 2 paper joggers. We just started not using them and not bringing in a lot of paper to the job so my employer was selling off some equipment. I asked if they would be interested in getting rid of one of the paper joggers, thinking about using one for what you want to do, I also thought the price they would sell it to me would not make it cost effective. They let me have one for 10 dollars (it’s worth probably 600-700 bucks) Everyone that seen me carrying it out the door asked if I was going to be using it when I went on trips (I still work with reams of paper at job sites… lol If I had been smart I would have been able to of purchased both of them, but as of yet I haven’t been able to try it out.epending on how well that item shakes it might work just fine,

I gave that one serious thought. I would be interested to see if someone has used this and if so how much? And for how long (used for a week a month a year)

My only concern is strapping on 15ml and. 30 ml bottle over and over again will burn it out. Like it’ll work great at the start but a month later not so much.

just saw this on that listing:

Don’t have my ruler with me lol not sure

The shaker is not worth the trouble.(even if it works on the bottles you want)
The stirrer is ok, but remember, it’s a stirrer, not a frother. I have only used it in small beakers
for initial stirring and it’s fine. Remember, you get what you pay for.

I still use a magnetic stirrer. All of my 50ml batches get a 3 minute stir before being put in the cabinet. Larger batches get another minute or two depending. As long as they have a decent vortex while stirring. All done at room temperature unless it isn’t stirring well.
I have used a magnetic stirrer for decades. Colloid metals, herbal tinctures, oil blends, etc. and now e-juice.
I have many sizes of stir bars, and a magnetic retriever to remove the bar from the liquid. Some of my tinctures REQUIRE alcohol for blending properly, so the beaker/bottle must be covered to avoid alcohol evaporation during mixing/blending. The magnetic stirrer is perfect for it, and I use the same method for my e-juice that contains alcohol.
It blends better, and the alcohol gets removed later by ‘breathing’ it. It can always be frothed later.

My badger stirrer sure seems to froth just fine.

Its a rare occasion that mine wont fit into a bottle, I just dump into a flask and mix/blend it in there.

The reviews that I’ve seen on the paint shaker haven’t been all that great. I wouldn’t pay what they’re asking for it.

The Badger 121, right?
It’s good, I am on my second one, but after 3yrs.
Used it on oil blends before e-juice.
Good battery life also, unless you use it 24/7

If you have a sawz-all (reciprocating saw) you can rivet a bar clamp to a shortened blade. Will shake a 30 or 60 bottle to a near froth in under a minute.

Is it possible for you to take a pic of this blade. You have my interest I just can’t picture what you mean. Now that is just fancy. I just use plumbing straps. They hold the bottles very well.

I mounted a small bar clamp in a $5 jigsaw. I wrap a strap around the clamp for extra stability.