Been using prebuilt coils for like a year, cause coils last forever if you treat them right, and I had one of those demon killer 8-in-1 discs with 48 in it … . ohh, I should get a grab-bag of flat stuff, wait, stay focused >.>

Right! So, I went to some shops today, looking for flat wire so I didn’t have to wait until after my vacation to play with it (cause Crazy Wire is awesome, but in the UK) and - apart from discovering that there are about 100 (literally) vape shops vaguely in my area, and several places with like 5 on a single street (colleges man), I found out vape shops don’t sell DIY stuff anymore o.o Like, none of them. I didn’t get wire until the eighth place I visited, and that place just straight up gave me some ribbon wire they weren’t even trying to sell. I pointed out they had a coil master and wicks and stuff for sale and he was like “I completely forgot about those!” It was. . .weird. I liked the two guys at that place, but I kinda hate what vape shops have become. Tho, given my chat with those guys, the FDA has at least as much to do with it as the hobby moving into the commodity sphere (people not wanting or being able to DIY) and what the major companies have done to aggravate that trend – specifically, apparently, shops aren’t allowed to help you troubleshoot a setup anymore because it’s dangerous? The hell? I knew about the ban on samples but this is just, weird. . .right, topic man, topic.

But, I get home and start playing with the ribbon wire and. . .dude, I thought .3 316 L SS was a bitch to make a simple coil with o.o After a few fails I grabbed my mixed twisted wire (because I don’t do wraps by hand, I made a few a long time ago, hated it, to each their own) just to see if I was out of practice: 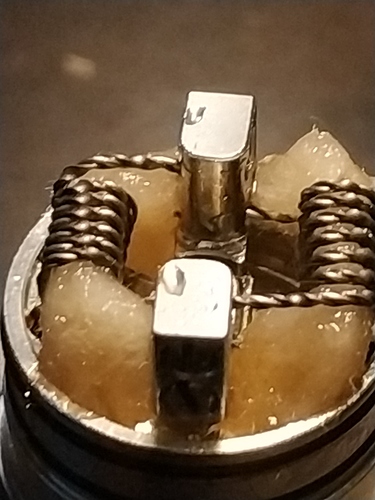 So, all right, half the problem is clearly that it’s flat wire, so let’s try a thick flat wire. Enter the Juggernaut wire (316l SS). 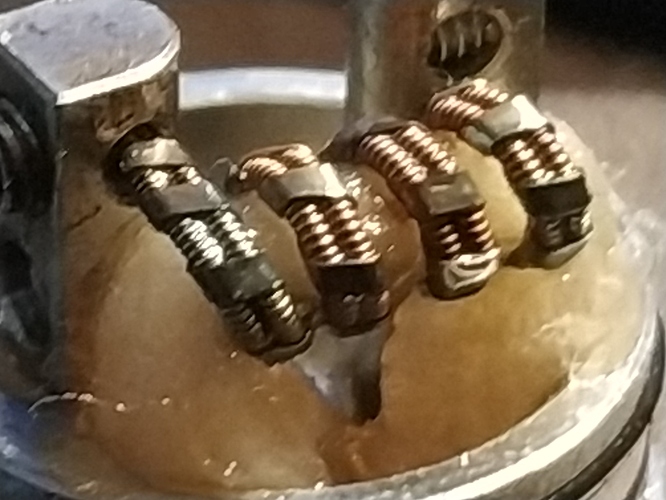 IMG_20190325_233507.jpg4000×3000 583 KB
Twisted by hand, and it shows, but still sexy. It’s running an absurd .16ohm, thus the single coil. That deck says V80041, so it’s probably a Velocity V2 clone. My tendency to buy clones might have something to do with why my horde of RDAs has shrunk – yet none of my RTAs were clones, and they all got binned, also my Goon was authentic, and the post broke. I really, really dislike anything with a floating post on one side - everything I had like that is broken :P. Stay on topic man >.>

Right, so, a couple more failed attempts later, I give you my (janky) Ribbon Wraps! 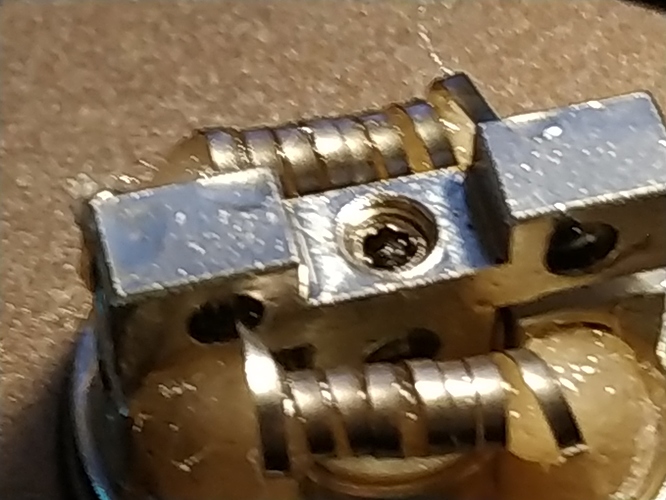 I didn’t really get this broken in before my battery died tho, so I’m not sure about the flat coils other than “Hey, they work!” and “Hey. . .I really hate new wicks.”

enjoy using simple flat/ribbon rather .8x.2 tho, dual 7.5wrap gets me .24. You are not alone w/ the wicking tho. I would think since its flat that it would be easier but guess if each wrap isnt perfectly lined up it fights w/ ya.

It’s a combination of being flimsy/flexi and the edge catching on the cotton, instead of being rounded.

Also this wire is .8x.1mm kanthal

Why did I focus on the worse ribbon coil? The other one is like twice as good cause I didn’t even try to use my normal amount of cotton for stuff wrapped on the 25 jig.

Edit: Oh, nope, looked at it in real life, it’s just as bad on the other side XD.

Coil gunk is an e-cigarette hassle that many e-people who smoke know all too well. How oftentimes have you ever skilled this situation? You’ve been the usage of your favorite sweet and creamy e-liquid non-forestall for some days, and you start to be aware a trade in the flavor. You forget about it before everything, however earlier than lengthy, it tastes like you’re getting dry hits despite the fact that your tank is complete or your wick is yet. You look at your atomizer coil, and this is what you spot:quite gross, right? There are quite some elements that make a contribution to atomizer coil gunk. No atomizer coil lasts all the time, however there are some conditions that contribute to fast coil gunk buildup. the coolest news is that those conditions are, for the maximum element, completely avoidable — a good element if you’re using a tank with pre-made coils and can’t have enough money to drop a new coil for your tank every day. prepared to analyze more about coil gunk and determine on a plan of action? examine on! 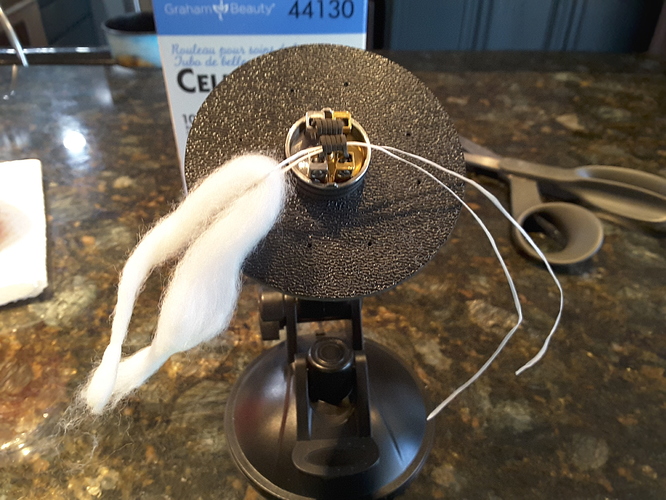 I’ve been putting this in about everything and really liking it. Stiffer than ribbon wire.

And we know how much you appreciate a stiffy😀

That single coil juggernaut in the Velocity RDA, screwed down to the pinholes (it opens to slots if you want just by unscrewing the cap a bit) is my favourite of the three I built yesterday.

I’m not happy with the flat coils at all, gonna need to play with it more and, I kinda hate working with the wire

wrapping a few more juggernauts today for later (beefier ones because most my RDAs don’t play so nice with single coil builds, even if they do have both single and dual airflow) just reminded me how nice it is to work with sturdy wire, even if it is flat. Which is kinda funny, because I hadn’t used much at all of that spool because, when I got it, I only had one deck it fit in (I started with RTAs) and also wrapping by hand is a little annoying, except when contrasted with wire that’s properly hard to work with.

The twisted coils are also just really solid, and super easy to work with because they work with the coil jig, instead of wrapping around the post by hand. But, I was using my last pair of these just a month or so back, so I remembered what they’re like n.n.

Oh, yeah, that Velocity-style is a V2; checked fasttech - , I love the pinholes on the V2 and V3, the V3 has those airflow tubes in the deck, if you want that for the open slots, plus you can get the pinholes AND the slots open because. . .reasons

, I really prefer the Tsunami RDAs for bottom air-flow tho, I’ve got four of them. The V4 velocity enlarged the pinholes by about 2x into oblongs and. . .meh, not a fan of the change, and it kept the bottom flow.

The 6 pinhole system, evenly spaced, is the only airflow I know of that (seems) equally good for both single and dual coil setups. So, slight topic change (as if this thread didn’t have lots of that), but I still heartily recommend the Velocty V2 RDA today. I think it just kicks ass. Nice and clicky putting the shroud back on the deck, great airflow, deep well, 22m, sturdy post, and I like the flathead screws on (one of) mine, the other has grubs and a different model number stamped on the bottom so it’s probably a different clone. Plus, it’s cheap.

Your topic, say what ya want

Only tried flat/ribbon on one velocity type and bit of a pita so only use it on clamp type. Those chunky post like lower ohms imo. My question is why no pics of a quad verticals in the inde duo?

Cause I did that once back when I got it and the damn thing got SO hot, like, it melted that plastic mouthpiece and I had to buy some metal drip tips and that was fun but, really, I decided I preferred it with the chamber shroud (tho the metal shroud is a nice change-up sometimes) and the plastic mouthpiece with, you know the wismec theorem? I took the tip from that RTA and put it in the mouthpiece of the inde to get it further from my face, cool the vape a bit, and stream it narrowly right onto my tongue, it kinda rocks, even better than the metal and glass wide-bores I bought for it.

I don’t have the theorem anymore, I forget why.

I’ll dig thru my posts and see if I didn’t post a pic of the quad-coil build. . … I’ll think about doing it again, it’s been a long time, and maybe it’d do solid with some kanthal alien coils? Hmm. . .Ack, my alien wire is SS, that’s be a pain to do quads for. . .I have hive kanthal! Huh, I just realized almost all my wire is SS 316l of some sort. Funny, cause I never use temp control. This juggernaut is SS. . .hold up vapes at 250c/50w on a .16ohm cooil

Oh hey, you can really drive down the ramp up by upping the wattage, and it keeps the temp from going too hot on a longer draw. Brilliant! Yeah, I think the temp control on my smok whatever I had maybe just flatly didn’t work (I seem to recall giving up because the reviews said as much), or else I just couldn’t figure out a fairly simple thing back when I first went to box mods and DIY . . .which is possible, heh heh. I really should try things again more often, chances are things that didn’t work, I was just doing wrong.

I guess I really should try quad coils again sometime soon, maybe I just did it badly when I first got it. 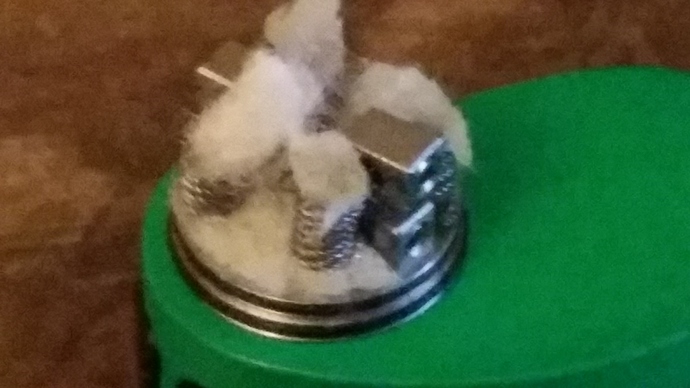 That hot thing sure, most did melt theirs so ive heard. Fun to try things another go and perhaps slightly different or actually right this time

looked forward to try quad verts in both but can always grab either for 5 bucks if i get itchy enuff.

I love my ide duos, got two, one still has the plastic cap with the theorem tip, and the other uses . . . I wonder if I ever posted a link for them actually, searches Whatever - they’re metal caps that fit the wismec inde and have glass tips , I forgot what I was even tlaking about now. . . 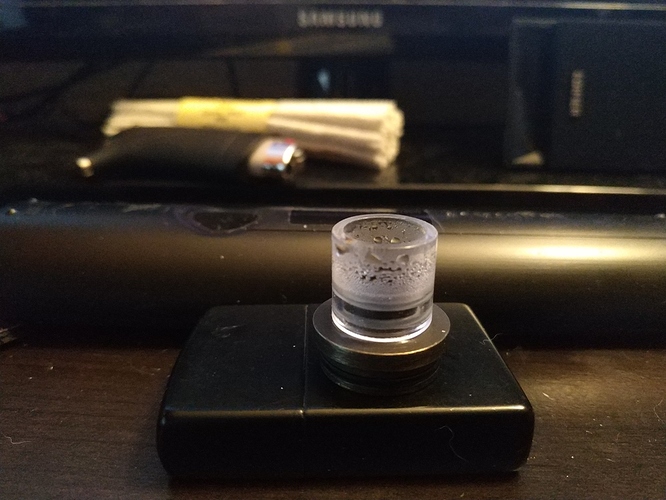 Insert pun about being ‘chuffed’ to have the presque vu solved.

i shit u not