Calculating 100 Mls and results are only 60 mls?

Newbie to DIY E- liquid. Using the calculator and I am noticing that when I am finished making a 100 ml recipe, that the actual outcome is only about 70mls perhaps? This is three times, the first batch I made was 30 mils according to the calculator everything was calculated correctly, I think! I do not use any nicotine and I making 30/70 VG – The only thing that I can say, is what I am making seems to taste really really good, but there is nowhere near what I should actually have. Can someone please help me? Thank you

@Weez Open your recipe. Press the Windows key. type-> snip
at the top of the results double-click the Snipping Tool program. Move the little box that pops up out of the way so you can see your recipe. Draw a box with your cursor over the recipe so we can see it. That will snip a little screenshot so we can fix where you went wrong. Save your screen capture as a .JPG to your Windows Desktop (name it recipe.jpg). Come back here and reply, hit enter a couple times for spacing and click the icon above that looks like a bar with an up-arrow (upload!) Browse to your Desktop and select recipe.jpg (click Upload) to post your screen shot

Thank you so much please help 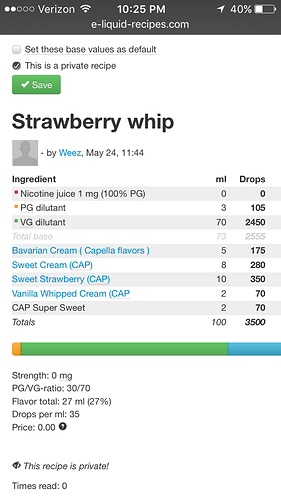 This recipe SHOULD give you 100 mls. Why do you feel you are getting so much less? Are you actually remeasuring with syringes? If you are truly adding the exact amounts that this recipe calls for then you WILL get 100 mls. It’s gonna be quite hard to add 70 mls of VG plus the rest of the ingredients and still have 70mls end product.

May I make a suggestion, get yourself a scale and start mixing by weight. You’ll find it much easier than using syringes…

You are right @ringling. I use the eJuice Me Up Calculator and if I type 70 it auto fills the 30 (percentages)

They do not need to change the pg… Flavoring counts toward PG, which is already 27% total (seems a bit high if i do say so but hey to each their own) plus 3% pg would make 30…
Try switching to mg instead of drops… I an assuming you have been mixing by volume(ml) not by weight?
Simply put, if you are measuring by ml and you actually measured correctly in each ingredient, you physically couldnt have less than 100ml…
@ringling beat me to it lol
But yea…
Not sure where your mistake is here, @Weez double check you syringe measurements, dont bother with drops, especially with such a large batch it wont be nearly as accurate as weight or actual ml

That was my guess, like a 1 or 5 and just miscounting

Ok @Weez the smallest syringe is marked up to 10 but it’s 1.0ml. That would mean you’re adding 2.7 mls of flavoring instead of 27 ml. 10 ml of Sweet Strawberry should be a reasonably good drop in the volume of your flavoring bottle where 1 ml would be barely noticeable. 27 ml of flavoring should fill your 100 ml bottle 1/4 full

I worry that once measured correctly, the issue will be “woah holy crap strawberry” i mean 10% of anything in a mix is a bit high… Though i think the 8% sweet cream would mute the crap out if it also… Id try like half of each flavor and see how it tastes… Hope it all gets figured out

true again. @Weez! if you never made this recipe before make a ten (15? 30?) ml and test before you suffer “Mixer’s Remorse” (Successful) Recipes over 20% flavoring are rare …although Strawberry is one of the weakest flavorings, sweet/bavarian cream and super sweet are not weak. We all had to learn but its better to learn with smaller batches. If reading “notes” under individual flavors notice there’s a “standalone” average% (single flavor by itself) and a mixing average% (usually half of the Standalone%!)

Perhaps show a pic of the means you use to measure @Weez?
The size difference is quite apparent between the small 1ml and a 10ml…
Here is my 10ml next to a 3ml even… 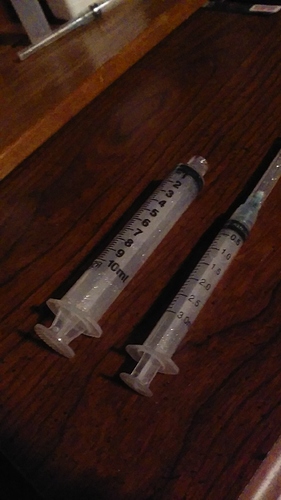 20160601_233711.jpg1440×2560 598 KB
As @ringling mentioned, though… Using a scale and measuring by weight is just such an easier time, especially when it comes time to clean up… When i started before i had my scale i was washing 6+ syringes out almost nightly and it became quite a hassle and chore as some flavorings are just potent and its tough to get it gone totally, generally the rubbery plunger part holds the smell longer and so its tough to get it gone completely… Takes quite a while…
Scale with disposable pipettes is much easier. I only use syringe for nicotine, now.
I filled a bigger squirt bottle with vg and a 15ml unicorn for my pg (which i use a syringe to refill also every few mixes or so) but i also only mix 30ml at a time…
1 Like
Weez June 2, 2016, 7:22am #15

Yes, think I’m going to try using grams next time. I have no idea what I am doing wrong, but it may be 70/75% of 100 Mls is alll I’m getting. But, it taste amazing it really and truly does That’s why I wanted to make a 100 ml bottle because it tastes so good…

I’m already out of the 30 ml that I made yesterday, well basically it was only about 20 mls; but whatever.

Also, somebody wanted to know what I was using for measuring. The recipe, as far as the strawberry goes, that’s what I found on the recipe on here and it is really damn good. I just don’t get 100 Mls or whenever I put: I don’t get 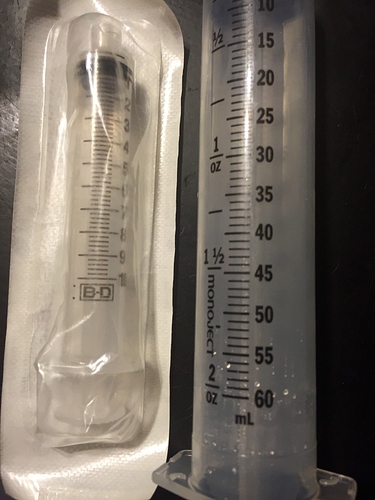 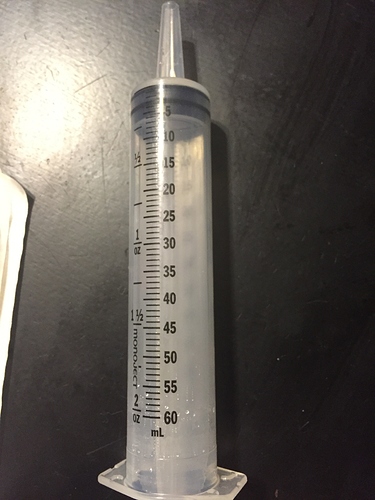 Thank you! I totally understand what you’re saying, but I don’t know how to calculate it when I’m drawing it up then

Well we’re guessing at your problem and I’m wrong you are not using a small 1ml syringe. If you like it then it’s good! That’s the only rule of DIY. Hah last guess…where are you getting 100ml empty bottles? I get 30ml and 120ml bottles. Maybe you are looking at 100mls in a 120ml bottle? Easy test. Have another empty bottle? Fill it with water using your large syringe. It’s “full” when the level hits the shoulder of the bottle not the neck (room for the dropper!)

Well, the first 30 mi that I started with was from quit that grit. That’s ironic that you mentioned about a different sized bottle because that’s what my son explained to me

I would sincerely like to thank all of you that have been trying to help, you guys all chimed in right away and I really am thankful