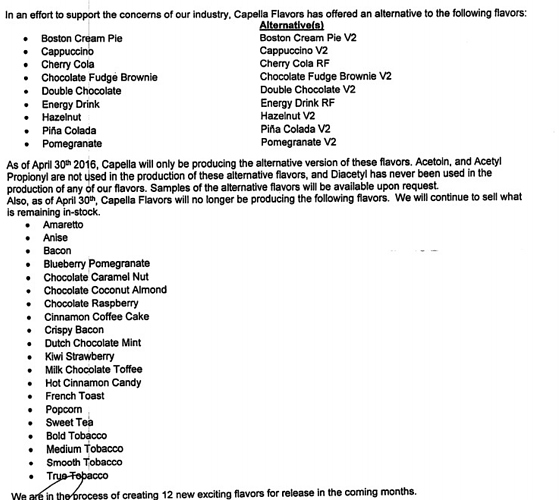 NOOOOO!
Can’t believe they are getting rid of bacon!

Obviously I’m not serious but who was ever successful with the bacon flavour?
Yea ugh!

Right? My heart almost fell out of my butt when i read the tittle.

I have those in my stash LOL wondering if I should ditch them?

I have Double Chocolate in mine as it is in one of my recipes, Chocolate Doughnut. Ill be buying quite a bit of it, i havent ever found their V2’s to be of my liking.

Sad about Boston Cream Pie, thats a good one right there.

I don’t see any of the warning coming up with Boston cream pie so why change it?

It is been a long time since i have used it but perhaps it has alcohol in it? If so they cant ship it overseas, they have reformulated several of their products because of this.

EDIT: Looks like it contained one of the so called undesirable components, Bull City Vapor has it as a caution product. This product contains Acetyl Propionyl and/or Acetoin

I think I’ll buy a gallon just in case.

Thanks for the heads up @authormichellehughes. Sorry to hear that CA Chocolate Coconut Almond is to be eliminated.
I found this flavor to be pretty good when compared to most Chocolates in it’s price class. ECX’s has given it 5 stars avg. rating out of 19 reviews.
Went to the CAP site and they will be supplying in place of old CCA.:
Double Chocolate v2 Flavor Concentrate
ACETOIN, ACETYL PROPIONYL - FREE
Hope the taste is up to or better than the non V2 CCA.

What “v2” flavors are the people here liking? I have had decent results from Lemon Meringue v2 and especially Vanilla Cupcake v2. I have some Vanilla Custard v2 but haven’t used it yet.

I think I’ll buy a gallon just in case.

I spoke with a Capella rep a few weeks ago. The lady told me they have no plans at all to discontinue their VC as it is so popular. I suppose the whole making things safer thing only pertains to those flavors they feel wouldn’t cause a terrible rift in overall sales. Pretty cheesy if you ask me. If they will not capitulate with all their flavorings then it makes no sense to alter any of them.

True to a point, but they don’t want to cut their own throats in the process. They know they’d have their customers panties in a twist if they changed VC V1. I know my boxers sure would be bunched up if they did.

And if whoever they’re trying to appease were to take a look at their sales records, my bet is that with all their flavors they have either discontinued or altered combined they wouldn’t put a dent in the volume of VC they send out with those chemicals in it…comparatively speaking. I could draw a dozen parallels here, but no point really. Maybe they are simply putting on appearances and will say they are dc’ing V1 whenever some entity starts pointing too many fingers at them. I don’t know why they just don’t give their customers a choice with all those flavors rather than slap window dressing on the whole damn thing.

I think to a great degree, that is exactly what they have done with V2. Changed, it, and give choice instead of “now use this”. Ultimatum is awful in any business model.

Interesting, not one flavor in that entire list that i use of theirs. Did not know that capella was diacetyl free. Also was unaware that our community was all that concerned about it. If they stop making vc i would boycott!!!

Also was unaware that our community was all that concerned about it.

I don’t think there are very many here too worried over the ingredients as much as the way the “alternative” flavors taste like shit. Well many of them anyway.