Not sure exactly where to post this, but here goes:

On 2/9 I placed an order through GremlinDIY for +/- 15 flavorings… Received it a few days later, Used a couple of them the day after I received it and they’ve been sitting in the box they came in for almost two weeks, until today I went to use a couple more to add to a bottle of blah store juice I bought yesterday and ended up taking a Mandarin flavor bath.

The whole top of the bottle appears to have been eaten through by the flavor, and when I grabbed it by the cap to move it the two pieces separated and ended up getting FA Mandarin on my couch, pants, hands, carpet and my other bottles of flavorings.

Not real impressed considering I hadn’t used it yet, and my scale is being delivered Monday… Naturally, orange was going to be my first crash test… Story of my life.

If you have this flavor I’d say transfer to glass to be safe… Anyone own a Delorean I can borrow? A while back I had the same problem from another shop and different flavors - four of the bottles had broken necks. I e-mailed the shop enclosing pictures and they admitted to having a bad badge of bottles and sent me new ones.

I did send them an email… I’m more concerned about the other bottles of flavors I ordered now… I ordered all at the same time so if its a bad batch of bottles, then the rest of them could come apart at any time… Also since the Mandarin covered almost all of them, I’m worried about it it eating them from the outside in. I wiped off the best I could and wiped again with alcohol, but I’m also paranoid.

Try wiggling them to see if they are loose. Some of the neck fastened in the lid, so it was obvious which ones were to come off. If the problem is the bottles then you probably don’t have to worry about the spilt mandarin.

I have the same flavoring in the same bottle for 9 months and no melting issues.

Like I said it could be a cheaper, or just a bad batch of bottles. You’ve had yours for 9 months I’ve had mine for not much longer than 9 days. A lot can happen in that time frame.

I love GremlinDIY! Be sure to give them an opportunity to resolve your complaint. Take some some closeups if possible of deformed plastic. That looks like a factory bottle and not a repackage. You may not be the only one and this could very well be a known issue with that batch or flavoring and they’ll be reimbursed by FlavourArt

It is a rebottle, FlavourArt factory bottles have an distinctive orange (or blue) flip top lid, not a screw-cap.

You can see FA Tanger (Mandarin) in this picture

I did send them an e-mail through the website, waiting to hear back now…

Some of my other bottles from the same order are starting to feel soft but so far none separated like that one did.

Gremlin responded; offered to replace the bottle with the same flavor or another equal flavor. They sent me a copy of the MSDS I requested and said it shouldn’t have been the flavoring to cause the bottle to eat itself. They also told me some of the bottles they had used did have imperfections causing bottle failure.

Asked if I could have the free bottle they offered thrown in on a future order instead of having it sent out immediately like they offered, and they said no problem just add a note in the comments about it.

I’m plenty happy with that.

Same thing happened to me from the same company using shisha orange. They really should not use that soft plastic for concentrated flavorings especially citrus. Maybe tell them what happened so they can correct the problem? If they used a PET container, this issue would never have happened

They really should not use that soft plastic for concentrated flavorings especially citrus. Maybe tell them what happened so they can correct the problem? If they used a PET container, this issue would never have happened

Hi all. As mentioned, it has nothing to do with what is inside the bottles. We have never had this issue before this last shipment. I highly suspect that there was an issue during the injection molding process. It only takes one machine a few minutes with not getting enough plastic or any number of reasons to make a lot of bottles with thin spots. Out of 40,000 bottles, only 15 or so have broken like this. Remember, the 5ml and the 30ml bottles also come from the same place and none of these have had issues. Honestly, it is not the flavoring “dissolving” bottles. It is simply a weak spot due to manufacturing problems.
I am in talks with my sales rep, a new shipment is incoming, but there is simply no way to tell which ones are going to break until they do.
There are a few flavors that we are going to be shipping in glass bottles (upon arrival of the new shipment) so don’t be surprised when you start seeing glass as well as plastic. We know there are some flavors that have issues (FW Blood Orange, Etc.) and we are addressing this.
So, to sum up… every order that we know of that had a bottle break, we have done our best to rectify, and we are working to make sure this stops.
ALWAYS reach out to your vendor when you have an issue with an order. We and they will always do our best to make sure you are a happy customer.
Thank you! ~ Rich

The hard pet plastic bottles suck for eliquid but are good because they don’t harbor flavor and rinse out in one wash.

The response I got via email and now this post are why I asked if it was possible to have it thrown in on my next order, instead of sent out immediately… Because you certainly will be getting more orders from me.

I can verify what @Gremlin_Juice posted. Received some FW Blood Orange and it is indeed in a glass bottle 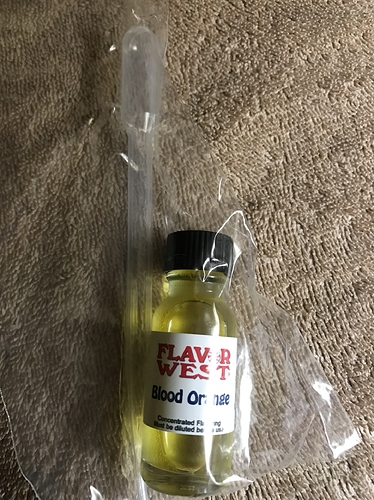