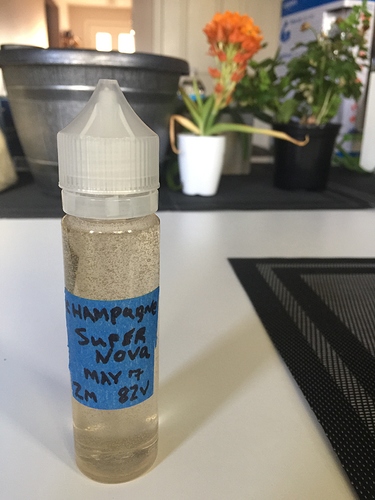 I’ve had champagne on the to buy list for months and still don’t have it. The recipe looks great.

I haven’t tried the TFA Rum. How does it compare to FA?

I’m not sure, this is my first time using it.

FA Jamaican Ruhm is a little bit sweeter than TPA Jamaican Rum, but both are good. They’re obviously 2 different rums, but that doesn’t mean that 1 is better than the other.
If you like rum flavors in your vapes (goes well with quite a lot of fruits actually), I’d definitely say get both rums in your stash. Each have their use.

As with most flavors, FA is a little bit more concentrated than TPA flavors, so test your desired strength and adjust to your taste.

Thanks for the info Jake, TPA sounds worth a try.

I’m looking for a boozy amber-type rum for my Pirate Castle recipe. It’s just a modified version of a Castle Long clone, with rum taking the place of the Kentucky Bourbon. Pretty good so far but think it could be better.
.

I’ve never made, or vaped a champagne mix but now I just might…

@MaxUT do you have your recipe online? If I have the flavours I’ll give it a try?

I don’t have it up yet, but here goes:

The odd percentages resulted from reducing a previous version’s flavoring by 10%.

This was originally based on the Castle Long clone.by @EWS, which is really good (and strong).