Check your credit card statements brothers and sisters. Just caught this one. Fraudulent charge from a Lowes Store 00907 in North Carolina. I don’t live in NC. I was told (supposedly) that any online purchases show up as this store number, which may be true. Regardless, I do not shop at Lowe’s online. A quick search revealed …

Salem Police said they were contacted by Lowe’s at 3:14 p.m. Monday regarding some suspicious transactions. The store’s loss prevention department reported that several men had come into the store and purchased a significant amount of store gift cards using credit cards. The men all appeared to be coming out of the same minivan in the parking lot

I called a few friends who I KNOW are slackers when it comes to checking their purchases and statements, and just pay the bill. ONE of them, had a fraud charge from the same store (again, assuming an on line order placed at Lowes). 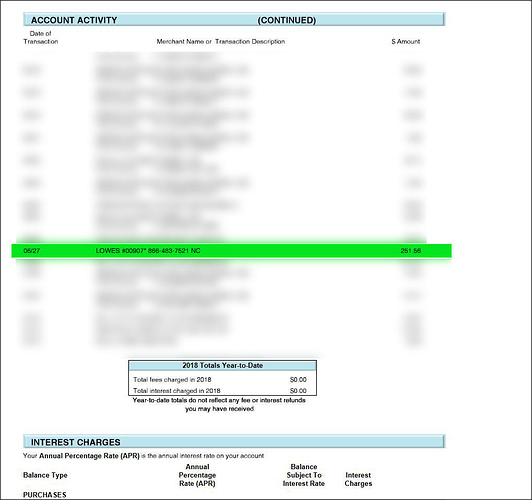 It’s a real thing, and even if you have a chip card, won’t matter, as that’s NOT used (at least where I shop) online.

Wonder how they get your number to begin with?

Wonder how they get your number to begin with?

Exactly what my CC company is working on. When I saw how many other people had been affected, and one of my friends was as well, has me unsure. @worm1 most of my orders are Amazon, Bull City, Nicotine River, DIYVS, and Medicine Flower lately, not sure.

And a friend as well, u two must have some place in common where u both used cards?

not the nudey bar??

not the nudey bar??

LOL I only wish it were that simple. My wife forbade me from continuing my solicitation of such establishments when I started DIY’ing. She said it was either mixing OR the nudey bar, and you see where I ended up.

Can’t u just mix a little?

Couple years ago my bank auto. cancelled my card since enough of my info to make charges was found in a DB but they couldn’t pin point the source since it dates back 6 months or sumin

She said it was either mixing OR the nudey bar, and you see where I ended up.

You’ve shown your commitment to mixing, for sure. Can’t you tell her you’re looking for inspiration for naming some complex mixes?

It is terrible that we can not be safe for the 100 percent. Now there are too many scammers. After I faced a fraud with my credit card, I read about what methods are used by scammers. Very often they use carding and cash app carding method. After this I thought about how I can secure my money and my credit cards. I realised that I should shop online only on websites that I trust. Also I made sure that my computer is protected from hackers, I use only reputable anti-virus software. And the most important is that I always make sure the credit card entry page is secure.