So, did anyone do any exchanging of gifts yet? I saw that autographed picture from that secret Santa in the other thread, which was pretty cool. Anyone else have anything to talk about yet?

OK, I’ll go. Wife and I have always exchanged on Christmas Eve Eve, ever since the the rush of Christmas visits and the ‘Santa’ thing when the kids were tots, it’s kind of become a tradition. So we exchanged last night.

She got me a Philips Hue hub thingy with 5 bulbs. I’ve been looking at that with interest for a long time, but didn’t know she knew I was. Nice surprise. It was the starter kit deal that came with 4 white bulbs, and she got an extra color one, too. Man, that thing is actually really cool! I’m not a slave to the latest tech stuff, but smart home things have always been appealing. Last year she got me that thermostat you can control from anywhere and with Echo, which is cool.

But this Hue deal, how neat! Those that have it know what I mean, I guess. Pretty neat to control the output and even color of every single bulb in the house (eventually). And it has these programs called recipes that make the lights do desired things, like change colors and flicker randomly like twinkling Christmas lights. Never knew I’d think it was this cool.

I got her stupid things like boots, clothes, etc, that she wanted and she’s happy. She also got me a new Mr. Beer kit for hard root beer.

I’ll go next. My wife got me…a staggering amount of credit card debt!

My work Secret Santa bought me a Harry Potter mug and a Harry Potter nightshirt that says “don’t let the muggles get you down”. They are both awesome

We get the kids pajamas every year and let them open them on Christmas Eve. They just opened them now, so I have four kids who are already in their pj’s and its not even 2:00 yet!

I can’t talk about it too much…because…I’ll prob start weeing…this is me at xmas…i’m basically 9 so …yep.
The only thing I know I’m getting is a bean to cup coffee machine from my mother…the rest I have no clue…but I bought myself a bag of Hawaiian Kona coffee beans so im very excited for my xmas morning coffee

Went to Bed, Bath, and Beyond yesterday and picked up a diffuser (as per another thread)… I also got a set of new strainers and a new dish drain board… also the other day I was given one of my presents early… two new frying pans, since my wife didn’t know how to wrap them so I wouldn’t know what they were.

And here I thought ya were house broken and all…

My ex and I would buy a lot of nonsense stocking stuffer type presents but we both sucked at keeping them under wraps until Christmas day so we would hand them out on any given day. I’ve continued that with my son and he gets to stick his hand in a grab bag and pull out three items. He picked:
An electronic cockroach (very real looking)
A guitar capo
Pickup for his acoustic guitar
(Good thing his bass wouldn’t fit in the bag. I so wanted to give this to him early)

He has given me a 45RPM of Wing’s Uncle Albert (“The butter wouldn’t melt so I put it in the pie”. Don’t know why that cracks me up…) and a tabletop mini pool table.

The capo reminds me of how well my daughter plays Free Fallin’.

The cockroach is classic, awesome.

Admiral Halsey is one of my favorite tunes.

He almost lost it after he put it under a plate of his friends food and had it knocked across the room from the panic swat.

I don’t know where he gets it from…

We are terrible at secrets at my house. Wait Ill rephrase, “I” am terrible". My kids are in town to spend the holidays with us, and daily i torment them daily, telling them to open the presents under the tree. Well last night they caved and opened them all lol.

My husband joined in and gave me beautiful diamond earrings. For me, I just love, love, love, buying gifts for people. I have so much fun finding the perfect unexpected items. I’d be perfectly happy getting nothing because I have fun for months shopping lol

We are terrible at secrets at my house. Wait Ill rephrase, “I” am terrible".

This is my husband. He can’t keep a secret to save his life!

) and I know what he’s giving me for Christmas except for exact details. Lmao

Lotto tickets, a bottle of wine and beef jerky.
I’m easy to please.

Two 9lb prime ribs. Unfortunately I had to share. 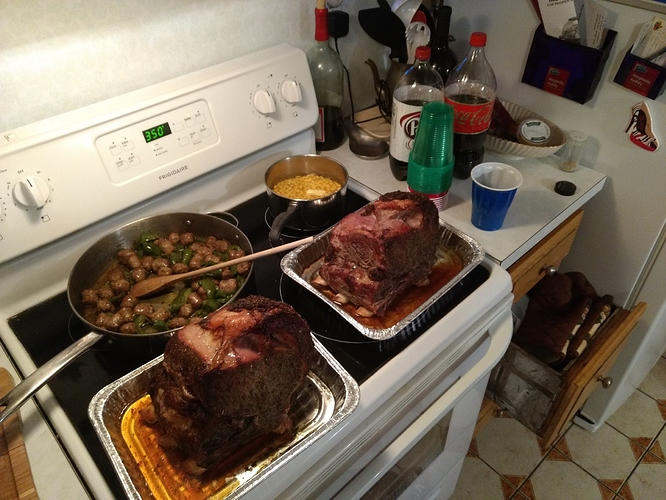 Sauerbraten or Rouladen? Spaetzle fried in bacongrease is killer, well besides the cardiac area. Usually need a nap after the meal. I think the calories are meant for mountain lumberjacks.

I got my daughter a pellet rifle, prismacolor pens and pencils, and other art supplies. Even though we said we wouldn’t exchange gifts, my husband bought me a boot knife with a chest strap! The one time I didn’t break the no gift promise!

It is pretty cool feels great and I love it. He is so pleased with himself… I will have to surprise him with something nice. I was actually going to get him a knife, but he needs some other things that need to be ordered.

Oh, and he is making ribs now. I am spoiled rotten, I tell ya. I have the best husband ever!

You nailed it. Sauerbraten with Gingersnap gravy. And yes, I napped!

Two 9lb prime ribs. Unfortunately I had to share.