Clash of Clans - Who Here Plays?

Just wondering if anyone else here play COC. I have a clan with a dozen or so long time members and thought it would great to join up with some friends from here. If you haven’t tried it check it out!

I played for a year and quite about six months ago . just got bored of it

Yeah, been playing a year and a half or so. About 30 bricks shy of max TH8

TH9 here. Bout 1/8 the way to TH10 lol. Takes forever at this level. I just gave my leadership position to one of my long time buddies in the game. This last update really pisses me off. Are you getting raided constantly now?

I don’t know. Just updated yesterday. It seems every time there’s an update where there are new items or game dynamics the raids increase then die back off some. But I get raided less and less since I’m spending gold as fast as I can loot it. No body wants my 6mil elixir. 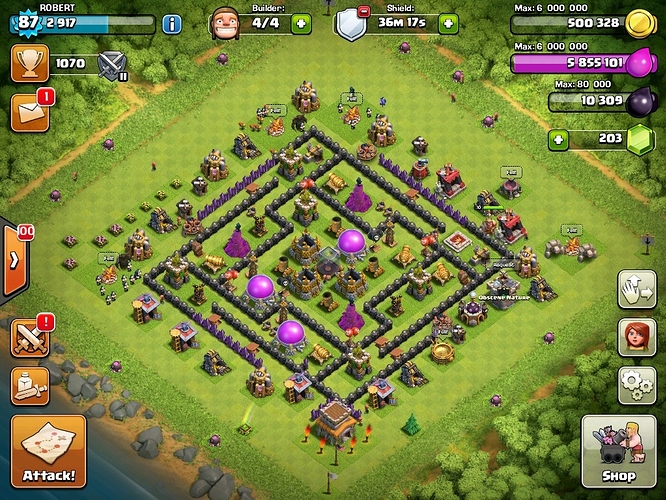 You now need to m9ve you th inside. Or you will get taken for loads of loot. Because the th stores a bunch now.

Actually destroying th no longer gives a shield. Just got hit 3 times in 2 hrs. Boy they sure faked up my game plan.

I have an account I don’t really play so much now but I still go on it every few days or so.

Yup. Lots of people are pissed about the fact that farmers now have to move their TH’s inside. Otherwise you will eventually lose all your loot.

I suppose if there is a balance to that its the fact you can retaliate and not lose your shield. That is if the attacker isn’t still online, or they don’t have a shield, or they’re not running xmod or whatever. My revenge success is good, but my success finding them open to attack is terrible. I think that’s the nature of the farming base. We’ll see if it changes. If not it’s no problem though. I’ll just quit playing…easy peasy

Started up a few days ago

Interesting you posted this when you did. That was about the time my town hall finished upgrading to level 9. Lots to build…again

Age of Empires was my game. Loved it. Rise of Nations was badass too. I used to own with that one. I would play against my buddy and I would be launching nukes at him before he even got one started. We should find a strategy game we can all play together online

Oh, if anyone needs a clan check out Wasted Warfare. We have been together a long ass time. Level 7 clan and movin up.

I play. Fill time war clan named Overdosed. We are a clan level 8, closing in on 160 wins soon. I’m DDS on there.

I’m DDS on there.

Now stop making faces at me…you know full well anyone who plays CoC can’t be all there!

You need to get your trophy level up if you don’t see them.