Can anyone tell me the difference between Aroma and concentrate?

I can only judge from the german language.

Aroma is something everything with a taste has, like, the taste of something, the aroma of an apple
Konzentrat is something concentrated, doesn’t have to be flavour-related (you get dish soap concentrates that are more powerful, for example)

So, in germany our flavours would be konzentrierte Aromen (concentrated aromas) ^^ 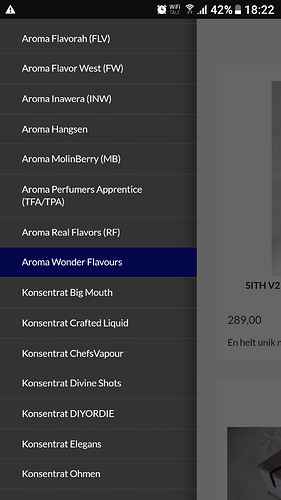 If you are on PGVG: the concentrates there are one shots and the aromas are what we call flavors in here. The one shots should be mixed at like 10-15 % in a base.

As has been said. There really is no difference.
It’s more relevant as to your geographical location as to what is more commonly used.

In the example you provide in this screenshot, the difference appears to be marketing (as is often the case).

All the common flavoring is being referred to as aroma (which is technically wrong, because if they carry the majority of the Inawera line, that includes many koncentrat instances).

The separation appears to come in vendors who blend their own flavorings together (diyordie, crafted liquid, divine shots, etc.) and sell the “pre-made concoctions” for the person who doesn’t want to get full on into DIY.

That’s my take on “translating” that picture. I’ll happily defer to some of our other UK/EU folks though because there’s a couple names I’ve never heard of in there (big mouth, elegans, ohmen).