Where is it best to store your concentrates, currently they are just on a shelf in my office but it does sometimes get quite warm in there and lights are on most of day and night.
I store my VG and PG and Nicotine in a spare fridge I have, would it be advisable to put my concentrates in there as well ?
Thanks

Mine are just stored in a cool dark cupboard atm

as @Lolly quite correctly stated I have a dedicated fridge, flavours in the fridge and nic in the freezer

I just use a drawer to store mine in and never have really tested the fridge theory but some say it works for them can’t see why not. I mean some things crystalize but you can shake them up and most clear w/o an issue Koolada is one that comes to mind.

Here’s some more info on the topic of Steeping

I have read a lot about steeping your juice and fully understand the theory behind it, however there are a lot of questions I still have. Being that many of you have a lot of experience in the DIY realm, perhaps you can give me some input as to your experiences. I have seen that there are several steeping methods: Air, Time, Water bath, Microwave, etc... Which have you readers had the best success with. I am curious as to what degree the various methods and amounts of heat affect the nicotine …

hey ive been mixing for a while now and have some recipes that I love but I want to get the most out of my juice so id like to know recommended steeping times for a fruit based or a cream based juice. just trying to taste the difference

Hidden science behind normal and accelerated e-Liquid steeping. We are all aware that steeping an e-Liquid can improve its flavour and change its colour. Here I am attempting to describe the cause and effect systems involved in steeping and accelerated steeping from a moderately scientific viewpoint. There are two major processes involved in steeping e-Liquid 1. Removal of volatile components by evaporation and degasification This process would include the removal of alcohol but is not …

Where is it best to store your concentrates, currently they are just on a shelf in my office but it does sometimes get quite warm in there and lights are on most of day and night.
I store my VG and PG and Nicotine in a spare fridge I have, would it be advisable to put my concentrates in there as well ?
Thanks

It is unnecessary to refrigerate Flavors, PG, VG unless we are talking long term storage. A cool place without sunlight should do in most cases. Nicotine is a entirely different story though. Keep smaller amounts that you will use somewhat quickly refrigerated. Larger amounts you should put in the freezer in glass amber bottles…

yes you are right also acytel pyrazine and tpa malted milk those are the only 3. that have ever crytalized and yes @Lolly i do use a refer and the reason why is because i lost a bunch of my flavors in spring when it started warming up and i live in washington state but my place gets warm quick so i started using refer after speaking to @PascalP37 from lesdiypournuls.com and havent had any problems at all i set my coolness dial at 1and 5 being the coolest

Yes, some flavors crystallize in the refrigerator.
So do not put Koolada, Acetyl pyrazine, sweetener TPA and Malted Milk TPA 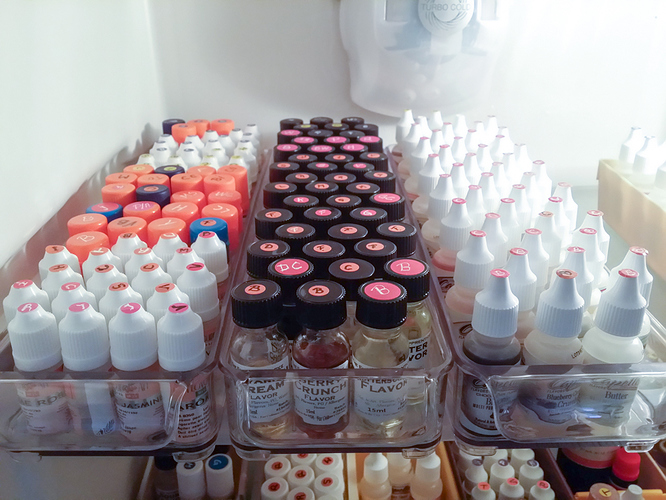 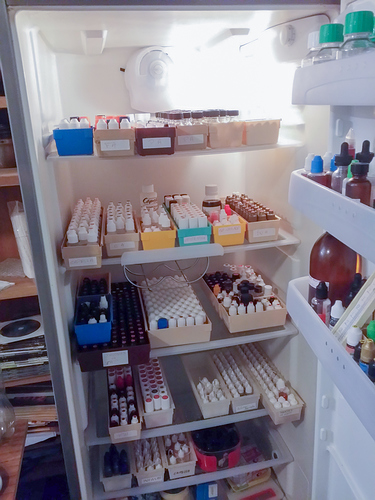 The OCD sorter in me salutes your fridge

SHELF LIFE FLAVOR INFORMATION TFA’s reply:
Concentrated flavors do not spoil, or go rancid, like fruit juices can. But under certain conditions they can change. In other words, you will notice that a “fresh” bottle might seem different from an older bottle. Basically, what my flavor manufacturer tells me is that the flavors have a shelflife of at least three to six months , when they are not continuously opened and are stored in glass. It is not necessary to store them in the refrigerator, but I don’t think that this would hurt them. But sometimes refrigeration can cause re-crystallization of flavors that have a lot of the crystals like ethyl maltol in them. Here’s some background. Every concentrated flavor is a mixture of raw materials, and every flavor blend can act differently. For example flavors that have a vanilla characteristic are going to have slightly different storage capabilities than fruit flavors. Here’s the reason. Vanilla and caramel flavors are mostly made of large molecules like vanillin, ethyl vanillin , etc. These molecules are not very volatile, and tend not to escape the bottle when you open it. They will be fairly stable. Fruit flavors, on the other hand, are made of much smaller molecules in general. Whenever you open a bottle, it’s the lightest and smallest molecules that escape and reach your nose quickly. Over time when you open a bottle over and over again more and more proportion of these lighter molecules leave the bottle and eventually the character of the flavor will be changed. This doesn’t mean the flavors spoiled, it’s just different. So this is one piece of advice, if you are going to store a flavor for a long period of time, transfer the flavor to smaller bottles that will you will not have to open over and over again. also, when a flavor is warm, like if it’s a hot day, when you open the bottle even more of the volatile molecules will escape, much more will escape than if the flavor was cool. This is true for all liquids, when liquids are heated the molecules are much more easily converted to their gaseous state. So in general it is a good idea to keep the flavor cool though I don’t think refrigeration is necessary. Also, in general, it is best not to store these flavors long-term in plastic. The plastic that we ship our larger sizes in ( 4 ounces and above), is HDPE plastic, which is very resistant to interaction with the flavors. but even with HDPE plastic, I really wouldn’t recommend storing them for longer than a month or so… It’s much better to store things long-term in glass. also, it is not a good idea at all to store the flavors with the plastic eyedropper caps on the bottles. The rubber that’s used with the eyedropper’s is extremely soft and interacts with a great many materials. If you try to store your flavors with these rubber dropper caps attached you will most likely ruin both the caps and the flavors. i hope this helps, Lnda

I love that it’s so tiddy. I try to keep all of them in line w/ the born date but then some stuff steeps before the others and it can get messy but I tend to go back and re arrange it all…a tad OCD myself.

vape flavours, or non lumpy milk. That is the question

Don’t give up! I started DIY February '16 and now have 400+ different flavors. Some are 18 months old, still crystal clear and the potency is as good as when new.

Hang in there. Failing is learning.

id argue the 3 to 6month shelf life statement . Ive had flaves for much longer without issues , as long as they are stored properly you have a lot more time than that