I am confused about what to enter on the juice calculators for the flavor bases. I just ordered a few different flavors and brands, but they do not have any info on the base. Water/pg/vg… How important is this? Should

Unless they specifically say they are VG or alcohol based, you should leave it at PG. 90% of the flavors out there are PG based.

I think @jojo was saying that 90% of the manufacturers of juice concentrate suspend the flavoring in pg. the other 10% are in vg or alcohol.

As for how much pg is in the concentrate I’m not sure. My newbie answer is some.

Since I primary mix with FA it’s a mute point and the calculator does my work for me.

Basically, what your saying is the pg would be set to 100% on most flavors, but maybe these are such mynute measurements that in small batches it probably wouldn’t matter much?

Almost all flavors are PG-based - so you’re probably safe to leave it default, which is 100% PG. It’s either that, or you specifically bought VG-based flavoring like the NWF-brand, or neither PG/VG like MF.

In short: Leave it default and do not worry

Which % are you talking about? Unless I’m mistaken, there isn’t anywhere on ELR that you can input the % of PG in your flavor.

The Water/Vodka/PGA percent (blue circle) should be left at 0 unless you’re planning on adding one of those. Under the Flavor name (red circle) is the option for PG, VG, or Other. Unless you know that your flavor is based in something else, leave it at PG. The percentage on the right of the flavor name (green circle) is how much of that flavor you want to put in your recipe. Most of the time this will be between 1-10%. 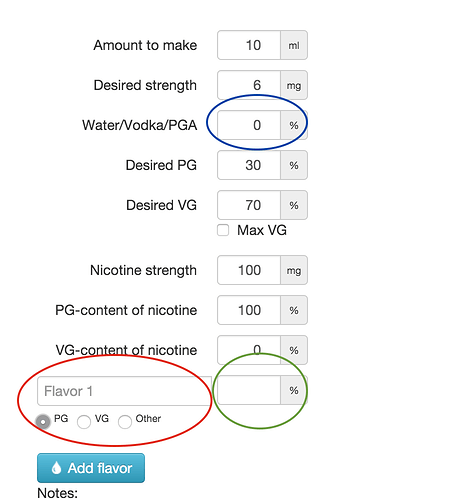