Corn flakes in my lungs!

certain flavors I can’t direct lung only MTL even then I ill eventually get a weird cough and taste corn flakes in my lungs its really strange. I think INW biscuit is one of the offenders but not alone some custards have similar effect. anyone else taste corn flakes in their lungs? is it acetyl pyrazine?

Hmm not here! I use acetyl pyrazine a lot and biscuit! Maybe cut down on the corn flakes for breakfast lol! Jk what percentage do you use those flavors at?

biscuit at 1% usually cappella custard 2 - 5% inw custard 2 - 3% i only use 1 custard ever though never mixed together.

I haven’t experienced this. But, if I find a punk band comprised of 11-12 year olds, I’m telling them they should write this song…

Is it when you cough? Like if you cough some mucus up, from your throat? Maybe some flavor form the vape has stuck to that, and comes “up” when coughing?

That does sound strange

I would try to isolate the flavours that causes your corn flake lung - then look at the sds sheet and see if you can find a common ingredient - you may be sensitive to one component.

The sds courtesy of Nicotine River

ya I will try to isolate which flavour and if possible which compound is doing it. If I MTL I can get around this problem but after lung hitting for a day or more its really nasty cough I sound like a seized up lawnmower and the taste is definitly corn flakes. also feels like something is stuck in my lungs and can’t cough it out. I will post if I find out whats doing it, im surprised and kind of freaked out that im the only one who has this problem, I don’t even use these flavours in high %
I will only mtl them from now on and quit them if its still an issue.

only ever use cotton bacon, never had issues with it. its definitly flavoring related, something in inawera biscuit and possibly their custard and some other companies flavorings, I also get a mild burning sensation in the lungs almost feels like heartburn sometimes, especially with a new coil and cotton but only with these few flavorings. I can switch to something else and it goes away pretty quickly. sucks cuz biscuit is one of my favourites.

Sorry I just couldn’t help myself… 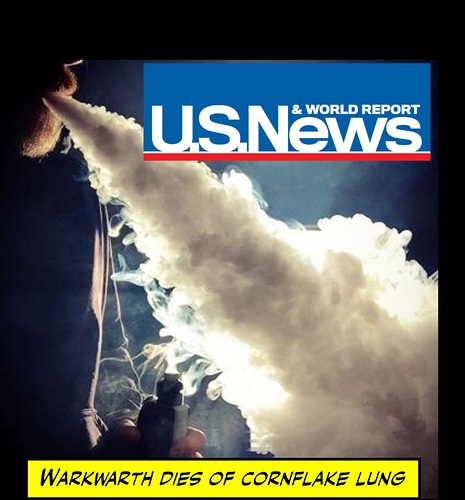 But seriously I hope you figure out what’s causing the cornflake symptoms.

I wouldn’t rule out the vanillin as the culprit. Asthma caused by vanillin is rare , apparently, but not unknown
http://www.inter-2t.phadia.com/en/Products/Allergy-testing-products/ImmunoCAP-Allergens/Online-Books/Occupational-Asthma/Documents/Asthma-caused-by-vanillin/

I’ve had to look into vanillin , in the past, because it gives me some pretty nasty symptoms when ingested, According to some sources, that might have been due to traces of gluten or corn in it (I’m extremely senstive to both) rather than the compound itself, I dunno about inhalation in my case. I’ve not quite been brave enough to test that out as yet!

Some concentrate manufacturers use natural vanilla rather than vanillin; so , if it is the vanllin you coulld probably get around that with some research and creativity . You should be able to work around any acetyl pyrazine issue, by switching brand. I know , i know, you wouldn’t get the exact same flavour that way, but asthma is not something you should be messing with.

don’t think its vanillin but thats good to know, I have fa vanilla bourbon and can never taste in my juice so I only use inw vanilla shisha which is still blowing my mind its good. but the recipe thats giving me this effect even before I had that vanilla is just INW biscuit 1.5% and INW custard 2% tons of flavour for 3.5% max vg

I dont have any pyrazine was thinking of buying some just to test out my guess that it was. But its alot harder to avoid it if its one of my flavorings and INW dosen’t hand out that info willy nilly

If you can isolate the pyrazine, and test that, then do go for it! That’s the only way to know for sure, As somebody with multiple food sensitivities, I know full well how disappointing the results of such trials can be. But it’s a damned sighr better than not knowing what the hell is going on, and getting out-of-the blue reactions all over the place,

Trouble is, those reactions can get worse and worse, If it gets to the point where the reactions become unbearably bad, or downright dangerous, then you’ll be wishing you’d done those trials a lot sooner.

I will at some point, I seem to be getting around it now by not lung hitting these flavours, I might do this with all my desserts from now on. Not like my lungs can taste anything and i haven’t tasted corn flakes yet, so its actually getting better. its tricky MTL on an engine nano with juggernaut coils though need new wire and tank