Next sort recipes, line the concentrates up against them, calibrate scales, start mixing.

None of them are my own, I used Bronuts, Strawberry Cheesecake Remix, Night Shift, Muffin Man Clone & Strawberry Milk. 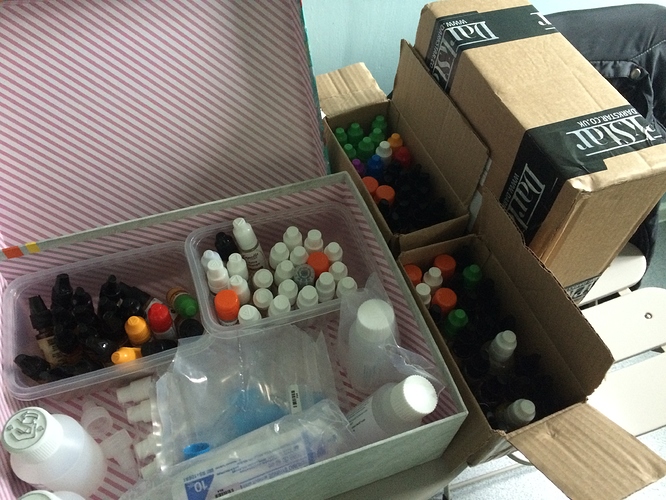 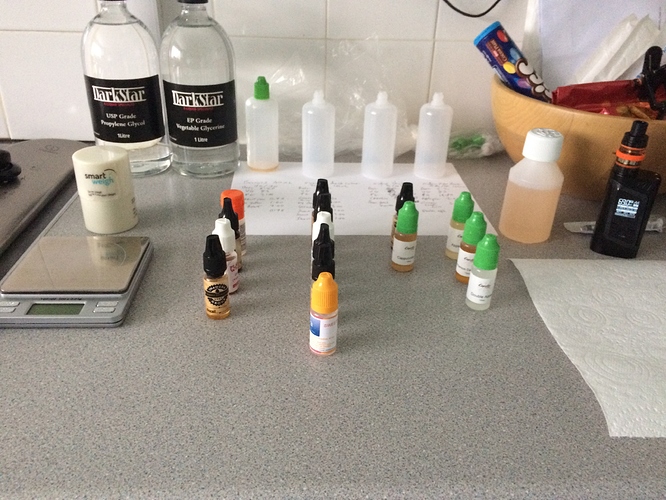 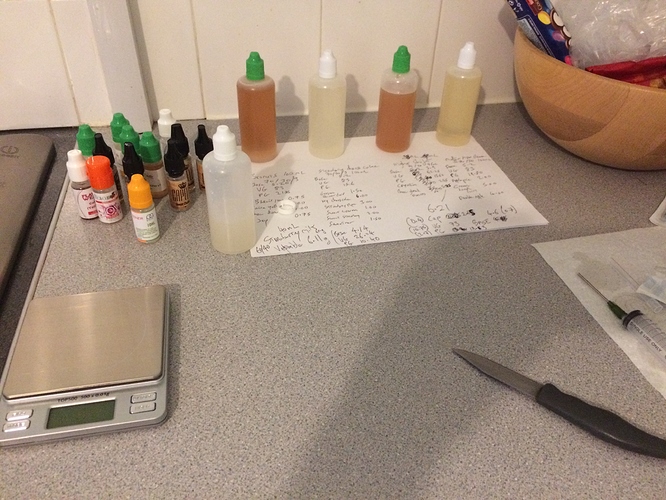 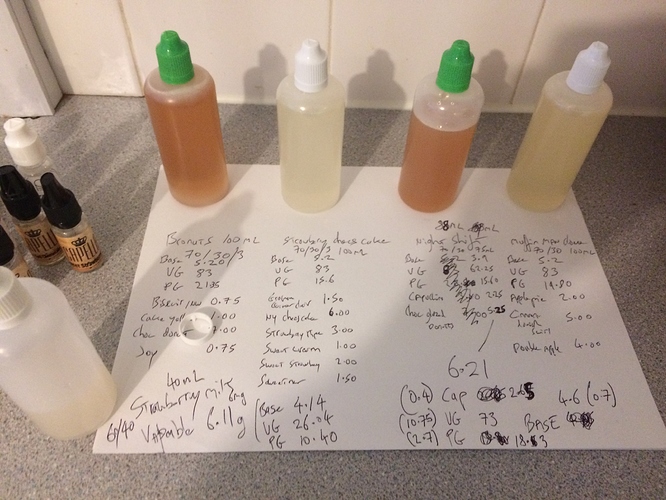 Ok off to rewick my RDTA Box & Chill with 28 weeks later, massive thanks to all the chefs…

Mixing does get faster with time. I typically mix with my laptop screen open. With all my recipies I’m mixing saved as a PDF print out. I rip through mixing 14-20 mixes in a 2hr’ish period of time start to finish.

Dare I say I have an Android Tablet with Vape Tool Pro on it (cause there ain’t no good ones for iPhone, that I can find anyway

, I type all my recipes into that along with my flavours and then work out which ones I want to make and then…

Glad I did that today as I thought I only had enough Chocolate Glazed Doughnut (CAP) for 100ml of Wayne’s Bronuts and just enough left to make 75ml of Night Shift, turns out I had enough to make 88ml, so had to do some quick math on the VG//PG, Nic and Cappuccino (Cap) to make up the difference.

Looking forward to just knocking it out like I can with Coils, that would be great.

This DIY stuff is well fun

Now got my iJoy RDTA Box full of 12.8mg of Muffin Man Clone, and I don’t even like Apples but this is awesome (maybe the texture), Vaping it is lovely and my Cleito on my Alien is full of Wayne’s Strawberry Cheesecake remix.

My fav’s are my own mixes mate

At the moment its a Jam Filled Cinnamon Doughnut I have been working on. About seven revisions and I am extremely happy with it.

The beauty of DIY is that you will tailor recipes to your own tastes, and make recipes that suit your own flavour preferences

I’ve only just started mixing and have some advice for beginners (like me), from what I learned today.

If your nic is in VG don’t try and suck it up with a blunt needle, use the tear function on your scales and pour it in through your funnel.

And the opposite, that PG stuff goes everywhere, use a blunt needle, suck it up and squirt it in, VG is good to pour through your funnel even from a litre bottle.

Here’s a tip I wished someone had suggested when I first started:

Pick up a couple of 100ml or 200ml LDPE Twist-top bottles then decant your nic, pg & vg into them so you can pour/drip straight into your juice bottles without using funnels or syringes.

I have a profile on ELR database under the same name

I have only been on this forum for a few days, but have been mixing for years and have mainly kept to Aussie forums and Facebook groups until now.
Ill be slowly migrating my recipes over here in time

@BathVaper tip is a great one! I fill a 250mL bottle with a sauce cap (from my 1000mL bottles) to use in my recipes as I go. The rest of my Nic lives in the freezer.

Cool thanks followed look forward to mixing some of your recipes and can’t wait for the doughnuts.

@BathVaper that’s definitely something I never would have thought of and will come in very handy.

I have been mixing for a little over a year now and I would agree with @BathVaper about using the twist top bottles except I have one problem with that… So I mix my base in a 250ml plastic Boston round with a twist top… All vg no pg… I use 10% di water to dilute the vg a little… My base is 4mg usually making my flavored mixes around 3.6mg or So… So my problem is when I use the twist top bottle to put my base in a 10ml or 30 ml bottle to test out single flavors or new flavors about part way through a bubble forms at the top of the little bottle and my base starts to pour out the top and all over my scale lol… Frustrating… And then it’s a pain to pop the bubble and keep going… Anyone know what I’m talking about?? And suggestions on fixing this little issue?

If your nic is in VG don’t try and suck it up with a blunt needle, use the tear function on your scales and pour it in through your funnel.

what @BathVaper said. My pg/vg goes into large 12 or 16 ounce (I forget which, but big) LDPE bottles with a spout/cap so I can pour out by weight. My nic goes into 60 or 120ml HDPE bottles I got from glass bottle outlet with yorker twist caps so I can pour/drip by weight. I am using 50/50 nic but also have half a liter of 100 vg nic in the freezer with to use eventually. The only syringes I use anymore are the cheap pipettes for flavors that dont have dripper tops.

Totally know what you mean…this happens to me sometimes when pouring in my vg.

And then it’s a pain to pop the bubble

Isn’t is just! I keep a blunt tip syringe handy to pop said bubble and if it won’t pop I’ll pull up the vg bubble into the syringe (hope that makes sense

I mix big batches into glass boston rounds (or some medicinal grade plastic azlon bottles I bought from an ECF user (need some more of those actually)) with standard caps. To pour into my 30ml dripper bottles I use a plastic funnel from GBO, and a paper clip to prevent the funnel from getting an air lock, and just pour from the big bottle mix into the drippers for daily use.

Remember the basics of what you are doing, when your adding fluid into the bottle (pouring the vg into your mixing bottle), your displacing the air currently inside that mixing bottle. The air is trying to come out as the fluid is going in. If your not leaving a large enough gap for the air to escape the pressure in the bottle is going to force the liquid around the tip of the bottle to basically seal around the tip and come back out. When you raise the tip out the vg is going to close around itself and make that bubble your talking about. For a bit of fun, do a web search on making monster bubbles (ya know like you use to get when you were a kid and blow bubbles with… to make monster bubbles people use vg in the mix because it does that sealing and stretching without popping).
If you ensure your leaving a big air gap between the stream your pouring into the bottle you won’t get that flood or bubble. At one time I was using a small funnel to put into the mixing bottle and pouring the vg into the funnel… but would get into the same issue, the outside of the funnel would sit on the inside of the mixing bottle, the vg going into the bottle would basically seal the inside of the funnel and everything would just sit there in limbo, air couldn’t get out of the bottle, so vg couldn’t go in.
Hope this helps a little in understanding the issue. If you use a tip on the vg bottle your pouring into the mixing bottle, and don’t hit the side or make too large of a stream when adding (so that the air in the bottle can escape), you shouldn’t have a problem.
When making batches that take a lot of vg, I normally will take the mixing bottle off the scale, fill it to close to what I know I want in it, keeping the bottle (mixing) tipped t the side, and just pouring the vg in from the vg holding bottle… then when I get close to what I’m shooting for, place the mixing bottle back on the scale and fininshing off the amount to hit the point I need.

Thanks for the detailed explanation! I usually hold the tip of the twist top bottle with my vg base in it above the small plastic bottle I’m dripping into and squeeze a stream into the bottle… If I can keep my hands steady it works out ok but when I am unsteady and the stream hits the side and then the other side the vg starts to form around the inside edge helping that bubble get started… Its so hard to take it slow when you want to just mix mix mix lol thanks again

A tip (literately), if that issue keeps coming up, instead of going to syringes, you might want to consider a cheap box of q-tips. Just grab a q-tip wipe the inside of the mixing bottle off and go back to the job at hand. I personally haven’t done that (using a q-tip), but tossing a q-tip imho is more preferable to having to cleaning a syringe… okay… I’m lazy…