I ordered 4 tfv12 prince tanks, in different colors, when Wetvaes had them on sale for 12.99 with an additional discount code for 25% off. I was very pleased with that deal but when I received them, all but one leaked.
I found out this is a problem with those, so I took them apart and re-assembled them from the bottom up and that fixed all but one. After several attempts to fix that last one and having it leak its entire contents all over, I wrote them.
They had some personnel changes at the time apparently, and didn’t reply. So I wrote them a more firm email asking what’s up.
This time I received a prompt reply from them, and they offered to send me a new one no questions asked.
I found a mod I liked on their sale page and told them to put the new tank with that order, as a thank you to them for taking care of biz.
They sent me a temporary discount code just for me for 10 percent off that order as well as my next order.
So, Lord willing and the creek don’t rise, I’ll be receiving my new tank and the groovy green smok mod in a few days and I’ll be made whole.
I threatened them that I would say bad things about them if they didn’t address the problem, I thought it only fair to say good things since they did.
So there it is.
Please note for your own sanity that those tfv12 tanks are a bit fussy and like to leak. They hit really good once you get the juice to stay in 'em!

Which Smok Mod did you order? I recently bought one in order to get the Baby Beast tank that came on it cause it was cheaper that way. Turns out I really like that little single 18650 mod. Except the battery door, it is hard to close but it’s not going to accidentally open, ever. I’ve never been excited about Smok before but the little mod with the Baby Beast, using the RBA is quite pleasing. 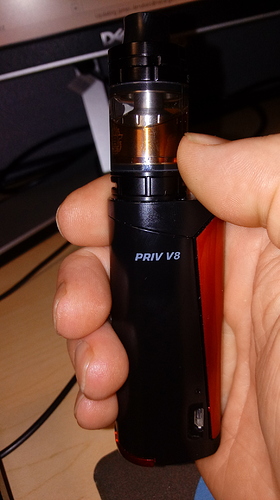 I’ve got a couple,( maybe 3 ) of the tfv12 prince tanks, never had any leaks thanks goddess, only wish they came with an RBA deck, had to order that separately, glad you got yours sorted out, sounds like good customer service!

And that right there is why I don’t buy Smok. Too much trouble… all that time spent on making it work, I can rebuild a good RTA or RDA

Not to mention cheaper coils too and better flavor too hehe

My daughter has used a TFV8 Baby going on two years now and never had a leak issue one time. Hits a dud coil about once in 10 but that’s not too bad. I know I’ve seen a lot of negative about Smok but haven’t seen it first hand.

Which Smok Mod did you order?

I got this one, as the kit. I like that it looks like a superhero, and it comes with the tfv12 tank, and it’s voice control which is very silly, however, when my friends that eyeroll when I blow clouds get a load of me talking to my box mod, and giving it directions via voice command, the look on their stoner faces will be priceless. 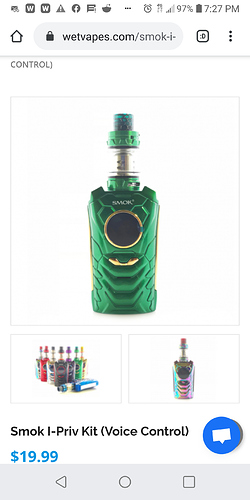 I was hitting about 1 in 5 when I was exclusively using Aspire. That’s what made me decide to build. That and my local go-to shop couldn’t seem to keep them in stock.

I was avoiding Smok for all the negative comments about their mods only lasting about 2 months but they sure put out a lot of offerings. They have some nice looking paint too. I started hearing alot of good things about the tanks. I bought the Baby RBA deck when I saw it for $1.80 thinking it would fit the Cascade mini but it was too tall. It looked so nice I couldn’t wait you’re it. It Vapes very well and the flavor is top notch. I’m still on the original prebuilt coils so we’ll see how my first rebuild goes. No leaks at all.