Cutting flavor % in a mix

So I just made a 100 ml batch of a recipe I’ve been using for a while now and made a mistake on my spreadsheet and doubled the flavor % from 10% to 20%. My Nic is 100% VG so I’m thinking I just need to let this batch steep and then cut it with PG to get the flavor down to 10%.

My math says if I put 27 mls of this mix in a 30 ml bottle and add 3 mils of PG I will get the 10% flavor I want. Herein is my question, what affect will this have on the end result, if any?

It also raised another question, which is, can you make a blend of just flavor and nic and then add PG/VG + NIC (to adjust the nic %)? I’ve read that steeping doesn’t start until NIC is added (not sure why that is) so if I did a blend with NIC would the blend steep so I could just add PG/VG later? How does/would this affect the steep?

Sorry for the multiple confusing questions, I truly appreciate all the ppl and work done on this site. I did search the site for a question like this but didn’t see anything, please link me if I missed it.

Basically what daath is telling you is pretty much what I’m about to tell you only I feel you need to do it once and it is done. Put all of your blend in a container that will hold at least 200mls. Here’s something we must determine. Is your batch 110 mls because you doubled the flavor? Is your batch 100mls and you doubled the 10% flavor and shorted the base by 10%? Very important things to determine.

If your batch is 100 mls then you will have to figure how much base you shorted the batch and add it, plus, the amount of base the recipe originally called for and you are done…

No need to steep first…This should fix you up !

@daath Wow I really messed up the math on that

I’m normally good at math and ratios but I got this totally wrong. Sorry for the confusion, it was a long workday and workweek. I looked at the number again and think I found the ratios to corrects the mix by doing a 200 ml batch and upping the PG in the mix to keep all the ratios the same.

@ringling It is a 100 ml batch, I just messed up with my spreadsheet where I use a cell to adjust the flavor quantities by a % I want and in this case made a mistake by using the percent from another recipe, “Mixing is Fun” ~ (That should be a Youtube channel, if it’s not already.

Thanks again for the help!

Hopefully this image will post and show I’m not as dumb as I looked in my 1st post here.

This is the formula/calc I used to adjust my mistake noted in my 1st post. 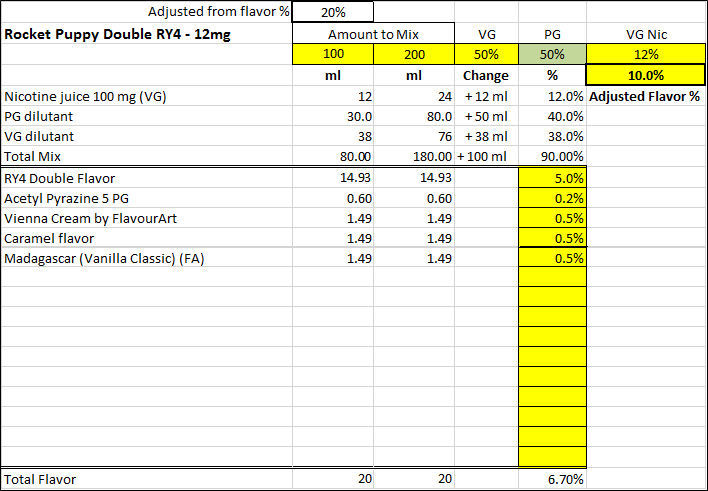 Only the yellow cells are entered except the 2 I added to adjust for my mistake “Adjusted from flavor & 20%” to fix my mess up.

I still would like thoughts on this question ~ Can you make a blend of just flavor and nic and then add PG/VG + NIC (to adjust the nic %)? I’ve read that steeping doesn’t start until NIC is added (not sure why that is) so if I did a blend with NIC would the blend steep so I could just add PG/VG & more Nic later?

Thanks again for a great site, for us DIY dummies (ME) and experts alike!

Well, in theory there’s nothing wrong with mixing nic and flavoring. I suppose you’ll get a little steep going. What is normally done is to create flavor bases (ELR does this), that makes it much faster to mix, but there’s no steeping…

Pre mixing flavor bases and pre steeping them is the way to go.

Its a really good thing I love caramel apple pie…