DarkStar in the UK are now doing one shot concentrates. I’ve been buying my nic from them for years, so I gave their Lemon Tart concentrate a try and it’s delicious. The recipe is a clone of Dinner Lady’s Lemon Tart ejuice and it’s very good.

Their Apple Pie and Custard is delicious, not an ADV but very very nice nonetheless

I like that their “open recipes” are coming from well known mixers in the DIY community, and the one-shot formula means you don’t have search for each ingredient in a recipe, I think they will be popular

Chefs Flavours has a ton of one Shot concentrates:

These ones are from well respected ELR members / mixers / DIY advocates

After all I have learned, the money I have spent learning how to mix if it actually becomes this easy I may just have a minor fit.

I use Chef’s Flavours as well, PRY4-U has been an all day vape for me for a long time, now you can buy it in a one-shot concentrate which is great. One-shots make things easy for people who wouldn’t normally DIY. Here are some more from Flavour-Boss (U.K)

Wow never heard of these guys, thanks for sharing, do you know if they do smaller bottles and are there any you recommend?

And the drumsticks one

I made a V2 of my rhubarb recipe

Hang on a cotton picking minute…they’ve got @alisa’s recipe on here. Are you aware @alisa? 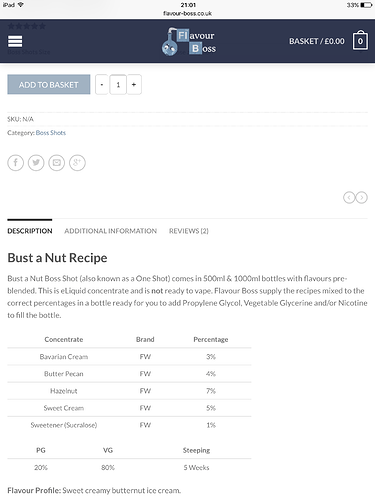 Share share…hVent had any mixing time so not tried v1 yet! Which are you preferring?

Your whacking the wasps nests there…

Similar kind of outfit to Flavour Boss I guess. Tempted to go chat with them on their Facebook page… they’re all advertised on there too. https://www.facebook.com/sydneyvapor

hard to say at the moment, they both need to steep a bit until i can say anything for sure but i think v2 is gonna be a more tart one since i added cold pressed tahiti lime and made a few other changes as well

I just wish that they would credit the creator if they’re going to sell it as a concentrate or a liquid. Makes me a bit grrrr

I know what you mean but what do we do when someone genuinely comes up with, for example bust-a-nut by themselves (chances are slim but possible), we end up slating them for “copying” when it cant be proved either way…

I also think they should try to contact the author and make an arrangement of some sort besides the credit.

With the very same name as well as ingredients…doubtful. Know what you’re saying though petal