DC Rally - fight for your rights US

I don’t think this looks like your regular Rip… is it really this serious? 6 months tops?

is it really this serious?

If you want to vape anything but big tobacco or big pharma approved Pods… YES.
(At least for the USA, and those countries who blindly follow our “leadership’s” opinions towards vaping.)

It makes me sick to think about but the industry is reacting as it will be over soon. Wayne from DIY or die had a reaction video that played after I watched that. He mentions how all these companies did what amounts to nothing for advocacy. I wish RIP would have put all these companies on blast but he is still trying to cash in before it’s over.

Big tobacco put up millions to lobby our dirty politicians and run all these scare ads on TV. Big Vape did pretty much nothing, instead relying on its users to advocate. The results shouldn’t be surprising, it is just sad that we had an industry of greedy individuals who only wanted to protect there pocket book and not the industry that made them rich.

I wish RIP would have put all these companies on blast but he is still trying to cash in before it’s over.

At least he flat out admitted that the major video players are paid for their reviews. If nothing else, that surprised me.

Big Vape did pretty much nothing, instead relying on its users to advocate.

And sadly, only a handful really stepped up.
Dimitri, Matt, Nick…the only names that come to my mind (at least for those I watch). I used to watch Phil regularly, but stopped when he shifted his primary focus to MTL.

I give props to the reviewers you mentioned and there advocacy. Instead of trying to rally there followers to advocate they should have asked them to instead lean on the big juice companies like Ruthless and so many others. Ruthless is at least advocating now on Instagram but too little too late.

These big juice companies were taking in multi-millions annually but not hiring a lobby group or making a plan to combat legislation. These companies should have been called out a long time ago, boycott there products if they do not start some serious advocacy. If we would have hit there pocket book they would have reacted but we didn’t and they just kept buying exotic cars and mansions instead of spending money to save the industry.

Politicians react to lobbying and the vape industry did none of that. We vape, we vote is great but we vape, we will donate to you reelection campaign is how it really works.

It’s a very sad development. I’m sure there are enough countries that are not blindly following the US to avoid a total collapse of the industry but if the US drops away, it’ll be a very big hit for sure.

These companies should have been called out a long time ago,

I completely agree brother!
Ruthless, Suicide Bunny, God knows how many others… (I can’t name many because I recognized quickly that the only way I’d be able to support the level of liquid I’d go through (thanks to switching to DL, and the avg price of $30/30ml in very early 2016) was too DIY.

Within months of taking up DIY, Aug 8 rolled up (as an issue). It didn’t take long for ME to see that if I wanted to DIY, I needed equipment that would allow me to continue past any potentially draconian legislative actions.

Like yourself, it surprised me that we rarely heard a peep on the subject of financial support, by those benefiting most in the industry. Liquid side, or hardware side.

As an I, and honestly? I am thankful for it.
However…

to avoid a total collapse of the industry

My point is, the question you (and everyone who cares about anyone they love who smokes) need to be asking yourself is “what industry”.
Pods? Because that’s the way China has already shifted. We’ve watched it over the last year.

Practically everything that’s being released/pushed into the channels that still exist (read as: reviewers and forums), is predominately pods. I don’t know about you, but that won’t cut it for me.

Those who wish to transition off smoking, and then quit vaping, have my total support. If that’s their goal, more power to them!

But there’s also folks like myself, who never intended to quit smoking, but found out that vaping works!! But I still enjoy the fundamental aspects of vaping. I have no intention of quitting vaping. Nor have I ever had. Should folks like myself be screwed by default? I don’t think so.

And then there’s the other obvious fact that it may require a different style of device (that pods can’t currently accommodate) that provides for the difference in inhalation styles. Those folks should not be screwed by default either. But the majority of the clueless fools on The Hill don’t know or understand these important distinctions…and why it’s imperative that there’s a need for each of these types of devices (not just pods), in addition to the need for the variety of flavors.

Thank you!
We (all) need it.
World-wide.

Practically everything that’s being released/pushed into the channels that still exist (read as: reviewers and forums), is predominately pods.

I see it on the sites, youtube channels, giveaways, so yes, it is what’s being pushed… but it’s not what I’m seeing on the streets.

that won’t cut it for me.

You’re not alone. It’s handy if you have to stealth vape somewhere but it’s something I’ve tried several times before I quit smoking and it’s just not the right tool for me and many others. If that is all they’re putting their money on, they’ll be shooting themselves in the foot.
If the demand is there for bigger, better mods, they won’t disappear.

If the demand is there for bigger, better mods, they won’t disappear.

I would like to think so as well…
But, the reality of it is:

So what’s left to support you (if shit really does hit the fan here)?
Canada… The UK… The EU…

Yeah, there might be some “remnants” of the industry left, but I can guarantee you that:
A. You won’t have nearly the selection.
B. Prices will skyrocket back to 2009-2012 levels. When it was common for just a damned atomizer to run $75-$125 for some 'average piece of shit. Imagine what mods will cost.

And in not even talking about the high end/high quality stuff that currently runs $300+.

So what’s left to support you (if shit really does hit the fan here)?
Canada… The UK… The EU…

China themselves, Russia, South Asia, Middle East, Australia, more and more people in Africa start vaping… I wouldn’t disregard those millions of people that already vape and are still going to. 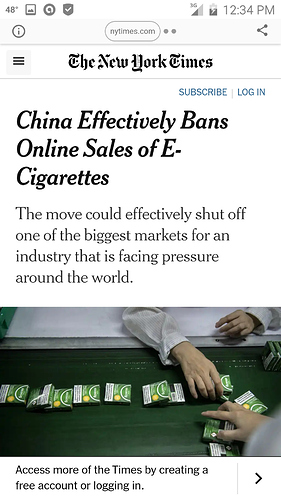 News has been going downhill there recently too sad to say.

Russia, granted. But I don’t know how much of a market they have. (you can’t just assume by population numbers, or at least, I wouldn’t).

South Asia… Not sure. But I definitely recall there being news of at least a couple of countries that will either fine, jail, or kill you for vaping.

Australia… I’ll leave that to @woftam or @Benoz or others to speak to the difficulties that they’re already encountering.

Not even a blip on the radar, financially and comparatively speaking. But always happy when someone finds that they can quit smoking by vaping.

Honestly man. Not trying to rain on your hopes here. I just don’t believe you’re seeing the reality in the numbers.

I’m not one of those “typical Americans” that some outside the US like to refer to. I get my news primarily from NHK, the BBC, and DW. And occasionally our country’s media.
I’m also of the opinion that helping folks quit smoking (those who desire to anyways) should have an EFFECTIVE and non price-prohibitive means to do so. REGARDLESS of where they lay their head at night.

Those who wish to kill themselves by smoking should also have the right. But that’s another thing altogether.

I post recipes for people to learn to mix. I try to teach folks what is behind what we do. Im not paid to advertise. In fact, other than myself… no other company has sold my shots, flavors or anything else.
My house was bought and paid for before I ever went into vaping, because of my parents death. I lost them both to Big Tobacco.

If we don’t reach out to smokers to teach them what we know, its lost.
If they cut us off from supplies… it’s lost.

We are only the vocal people of diy… but change is coming.
Can we stop it?
I hate to say it, no… but the industry will not collapse. It will be different.

I can’t even make the rally… my car will not make it. I worry on a daily basis, if something goes wrong with it… there is yet another 400-500 in repairs I need to put into it…

Can we get this stickied?

Sorry my friends; I kind of flipped my lid for a moment and cussed rip trippers out even though he has no idea. I know there are people that don’t like the guy and I’m not really one of them. It’s just that video really pissed me off for some reason. It just got under my skin

Hope is something I try to avoid but I can’t help myself. I hope and I Pray (not the traditional way) that we can come through this. The corruption of not only our Gov. but the world has gone on long enough. It is time we take a stand. Here is a dirty curse word that I pull out every once in a while

Not just us in the States but a WORLD REVOLUTION. I am sick and I am tired of the Police State in my own country and the money-grubbing sons a bitches in the rest of the world. Pretty soon I won’t be able to take it like a good little boy.

Edit; I don’t mean that as a threat. Just a warning really. I am at the end of my rope and can barely hold on.

I read somewhere that the UK isn’t as strong on vaping as we think. For them it’s about Health and I’m afraid they can fall into the pit too. I just can’t find it or remember where I could go to find it.

On a global scale, you’re absolutely right, a few million vapers at most. In this case, it’s less about the numbers, more about how the world looks at the UK as a leader on the global stage.

Not sure how strong UK is on vaping, but their Government says vaping is 95% safer than smoking in push to get smokers to switch to e-cigarettes. That is UNIQUE and admirable position!

Until now their Ministry of Health was the only one doing their job in the public interest and shown it is not run by corrupt puppet whores in hands of big tobacco/pharma lobbies like in the rest of EU (or anywhere else; correct me if wrong). Until now. I wouldn’t bet this will stay the same next year. 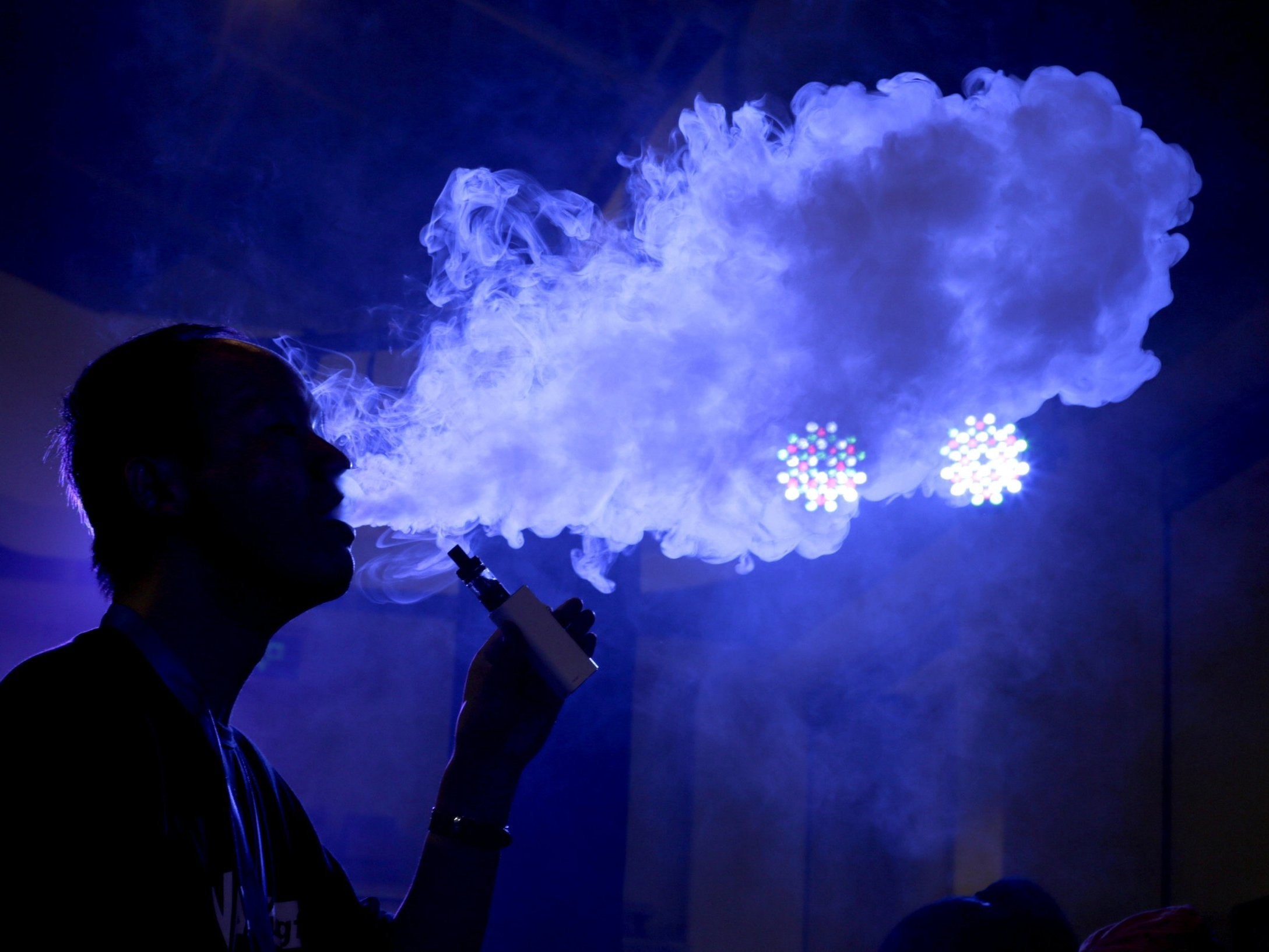 Government says vaping 95% safer than smoking in push to get smokers to...

PHE director of health improvement Professor John Newton said the experiment visually illustrates the stark contrast between the impacts of smoking and vaping.

Research estimates that, while not risk-free, vaping is at least 95 per cent less harmful than smoking.

Prof Newton said: "It would be tragic if thousands of smokers who could quit with the help of an e-cigarette are being put off due to false fears about safety.

I don’t remember any other government official in any other country using so positive words about vaping.